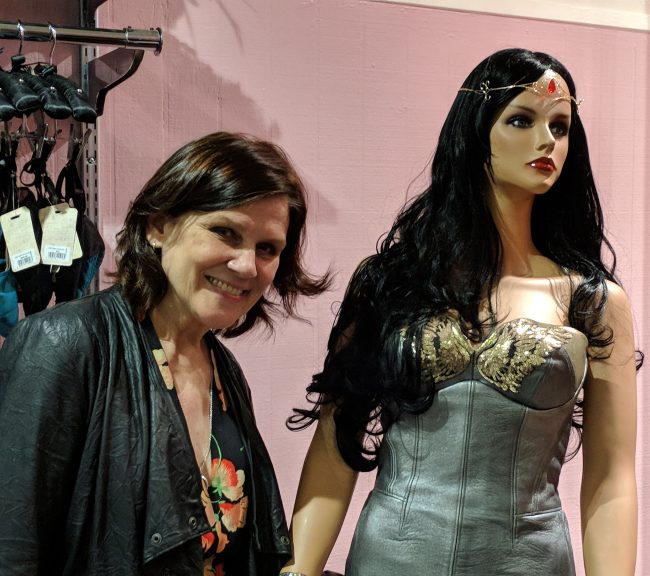 Donna Maloney, the costume designer on Professor Marston and the Wonder Women, has been working with costumes for over thirty years. She’s always known that she was meant to work with clothes for the rest of her life, but it took a friend studying in Europe, several jobs in other areas of entertainment, and fifty-two trips to Belize for her to finally arrive at the career of her dreams.

Maloney started out as a production assistant when she met another PA after college in New York. She had done other work with clothing before, but it was this meeting that sparked her interest in film. I asked her what it was about clothing and costumes that spoke to her.

“It’s really the only thing I’ve ever been wildly interested in,” she says. “I’ve done other things in my life, but it’s always been clothes-related. When I got out of college, I moved to New York and I worked selling juniors clothes. I was never really good at [sales], but it was always clothes. I knew from the minute that I was on my first commercial set that it was what I wanted to do. There was no question in my mind. I had finally found home.

“But I worked on a job as a grip, and then I worked as an electrician, and I worked in the office. I wanted to make sure that I crossed all the “t’s” before I chose costumes, but once I was on that path, there was no stopping me.”

It was her first job as a PA on a film called Mosquito Coast that brought her to Belize. A lot. Back in dinosaur times, when films were made on actual film, they needed to have film canisters delivered from the shoot’s location in Belize to Miami every other day. Maloney was hired as one of two PAs to fly the film back and forth, and she made that flight fifty-two times.

When a friend was studying in Italy, Maloney tagged along (“Because, why not?”), and ended up getting a PA job on a little film called The Unbearable Lightness of Being, where she ended up training under legendary costume designer, Ann Roth. They built a relationship, and she’s been Roth’s Costume Supervisor (most recently on the Spielberg film, The Post) for over 30 years.

Maloney started working on her own projects as Costume Designer about ten years ago. While working on a film called Amira and Sam (2014), she met producer Terry Leonard, who ended up reaching out to her a couple of years later about Professor Marston and the Wonder Women.

For Maloney, costume work is less about design or fashion trends and more about exploring character through putting the right pieces of clothing together.

“I do a lot of period films,” she explains. “And fashion isn’t really a part of that. I’m not saying that there wasn’t fashion [in different periods], but when you’re thinking about character and how a character relates to the film, and how clothing relates to them, you have to think about how they eat their breakfast, and where they went to school, and what created them to be who they are that reflects their costume choices, or their clothing choices. If you do a film like The Devil Wears Prada, then it’s all about fashion. But on a film like [Professor Marston], it’s all about who the characters are and how they live their lives and how their clothes reflect that.”

She talks a lot about her decisions for the character of Olive Byrne, and I got the sense that Olive was the baseline around which the other characters were designed. Maloney knew she wanted Olive to look very much like a student when compared to Elizabeth and William Marston.

Maloney specifically mentions a late-20s sailor top Olive wears early in the film as an exampleone of the few examples of period fashion and style in the film, as both Olive and Elizabeth had versions of that shirt. The character decisions, however, came in their type: Olive’s was lacy, and silk, and more youthful-looking. Elizabeth’s was more mature and “professional.”

Over the course of the film, it’s Olive who has the biggest journey, maturing into womanhood through her relationship with the Marstons (and surviving on her own and with her children during a period of separation from them). Maloney continues to tell the story of Olive’s evolution through her clothing. 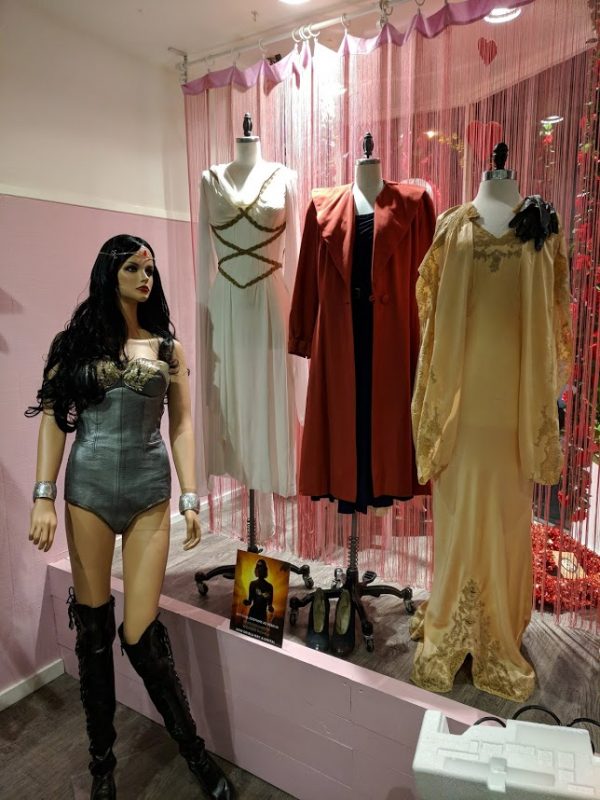 She describes a scene toward the end of the film, when Olive visits William in the hospital when he’s taken ill after not having seen him for a long while. “When she enters the hospital, she’s become a woman,” Maloney says. “She comes in in the costume in the front [in the window at What Katie Did above] where she’s in the red coat and the blue dress. Which weirdly, and I didn’t consciously do it, but it’s reminiscent of Wonder Woman, it’s the same color motif. And she’s become a woman. I think part of that was that she had to leave the family and take a job and become an adult in a way.”

Something that we don’t hear about too often is the fact that there’s a time limit on working with genuine vintage pieces. We don’t really think about it, but the further back in history you go, the fewer actual articles of clothing are left to be worn. This is part of what Maloney loves about working on period pieces, the challenge of it. The hunt.

And Maloney did a lot of hunting for this film. Every single piece was vintage, no replicas. And each actor had fifty costume changes spanning several decades.

“I love period. It’s really challenging, especially this film,” Maloney explains. “There wasn’t a lot of money. There wasn’t a lot of time. And there’s not a lot of 20s left. Boardwalk Empire happened, and all the 20s in the world went there. [laughs] And honestly, it’s over a hundred years old. People wear it, and it gets destroyed.”

One shirt that Olive wears in a nightclub scene, Heathcote wore several times shooting several different scenes over the course of a day. “The last scene we shot her in, she was meeting with Brant, her fiancee, and it had literally split,” she said. “And we were gluing it together for her to be able to get through the day! The shirt was completely ripped apart. But, you know, it’s over a hundred years old. That’s what happens.”

Thankfully, Maloney belongs to a group of costume designers that have a collection of vintage pieces in a warehouse that they all share with each other. The warehouse is in Pennsylvania, which is where Maloney grew up, though she now lives in Manhattan. Despite her decades-long career in film, she has no desire to move to L.A.

“I’m an East Coast girl,” Maloney says. “I tried to live here. I did a film here about 20 years ago called Mambo Kings, and I tried to live here, and just sitting in my car…I just…and I’ve come here and worked and enjoyed it, and I love the weather, but I’m a New Yorker. I walked today from my hotel to meet Angela, and it was like a 20 minute walk, and people were looking at me like What are you doing walking? [laughs] It’s just different.”

Thankfully, film is a global industry, and Maloney has no trouble finding work everywhere. She rattled off the cities and countries she’s worked in, and it’s astonishing: France, Germany, Iceland, New York, Morocco, Vancouver, Italy…

The next project of hers we’ll get to see is on the small screen. She recently completed work on the first season of a show called You, a Greg Berlanti show coming to Lifetime and starring Penn Badgley (Gossip Girl) as a guy who “kills a lot of people.” When Maloney goes contemporary, it seems, she doesn’t mess around.

Professor Marston and the Wonder Women is out on Blu-ray and Digital now.