From Meeting With QAnon Conspiracy Theorists to an Inability to Draw an American Flag, Trump Had a Weird Weekend 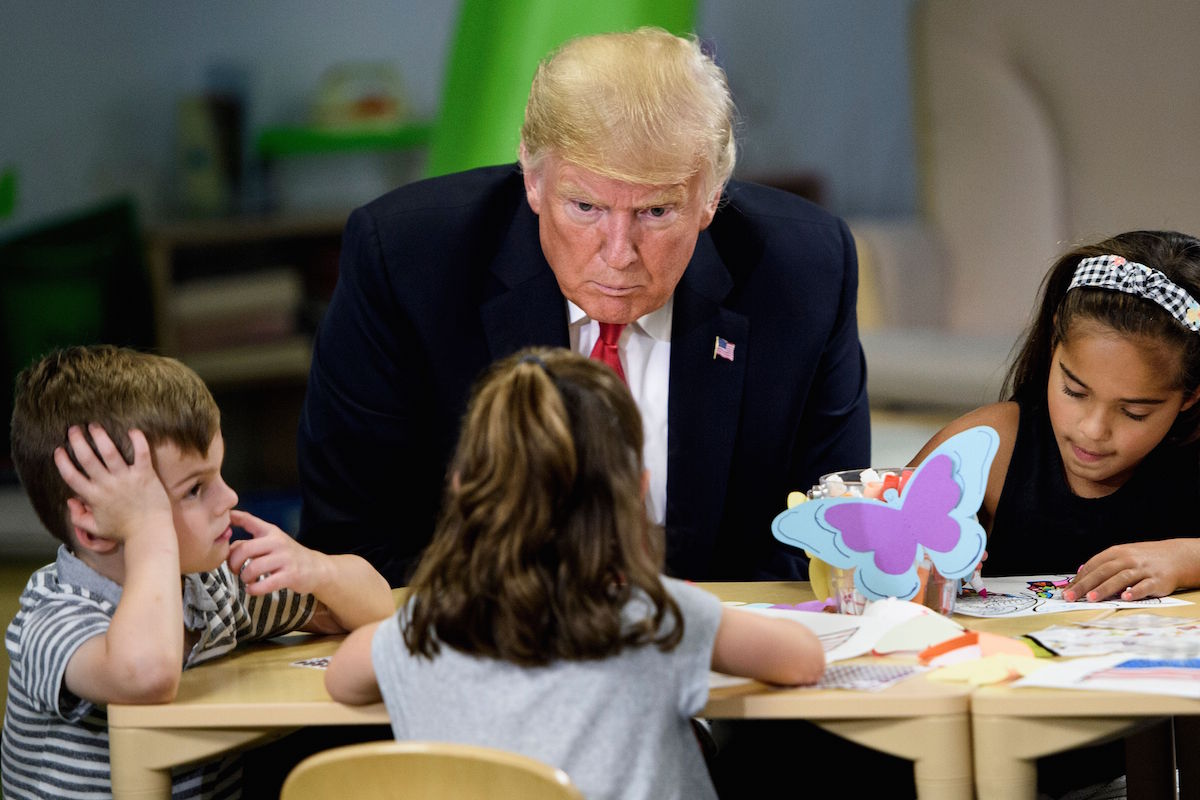 Donald Trump had a weird weekend. Of course, you can say that pretty much every weekend, but this was a particularly strange couple of days.

First, Trump had a meeting with a major figure in the QAnon conspiracy world, Michael Lionel Lebron. If you’re not familiar with QAnon, well, I envy you. That’s the 4chan-based theory that political leaders, including all past presidents, as well as media figures and Hollywood celebrities, are part of the “deep state,” a shadowy criminal web of child sex trafficking and an international pedophilia ring.

They believe Donald Trump is going to take down this web, and that, in fact, arrests have already been made and that people like Hillary and Chelsea Clinton as well as Barack Obama and the late John McCain have been walking around with ankle monitors on. (The Clintons and McCain all at one point have worn orthopedic cast boots for medical reasons. Or for ankle bracelet reasons, depending on who you believe.)

Anyway, that’s who Trump invited for a meeting at the White House, a major leading figure in that internet yarn wall, as well as his wife.

There simply are no words to explicate this profound honor.

It’s true, it is hard to “explicate” this meeting. Because no one can actually figure out (or admit) how it came to be.

According to The Daily Beast, which first broke the story of the meeting, an official White House rep never responded to their request for comment, nor did Lebron. They did, however, speak with four WH officials “about how Trump, the leader of the free world, ended up in a smiling photo op at the Resolute Desk with a prominent QAnon conspiracy theorist,” who all “pleaded ignorance about when this occurred, and why.”

“Two of these West Wing officials audibly could not contain their laughter,” writes TDB. One official “joked” that “This president is a president for all Americans,” even the most radical conspiracy theorists.

It’s important to note that as laughable as these QAnon theories sound, their believers have proven themselves to be potentially dangerous. Stormy Daniels’ attorney Michael Avenatti reported being targeted in person by a QAnon theorist. Another believer, an armed man in an armored truck, blocked traffic on a bridge near the Hoover Dam. And QAnon frequently mentions the tangential theory of Pizzagate, which saw one supporter fire an AR-15 inside of a pizza restaurant he believed to host a Satanic child sex cult tied, in the minds of these conspiracy theorists, to Hillary Clinton.

So how did Lebron and his wife end up in the Oval Office in the first place?

It is highly unlikely that Lebron and his spouse were simply able to casually stumble into this meeting while on a White House tour, for instance. Those familiar with how this Oval Office operates say that typically the only way that an Oval photo op between President Trump and strangers would even happen is if a senior official vouched for the guests and waved them in.

That was only the first bizarre photo op Trump had this weekend. Later, he met with a group of children at the Nationwide Children’s Hospital in Columbus, Ohio. Trump had a very bad week, news-wise, so what could be better than a photo op with cute kids and drawing some attention to the work he keeps insisting he’s doing regarding the opioid crisis? What could possibly go wrong?

The President has colored his flag wrong.

Yup, that’s a very real picture of Trump coloring red and blue stripes on the U.S. flag. Many were quick to point out that our flag does not have red and blue stripes, but that Russia’s flag does. So at worst, Trump forgot that he’s not supposed to show his allegiance to a foreign adversary. At best, he’s so vacuous that he just plain forgot what the flag looked like. Of the country he runs. Remember when he clearly didn’t know the words to the National Anthem? He sure is taking this whole “America First” thing seriously, huh?

Of course, Trump’s supporters will find any way to justify his behavior. The argument they’re going with is that it’s just coloring! It doesn’t mean anything! Why do we have to take coloring with children so seriously???

Cool that that’s the standard we’re holding the president to.