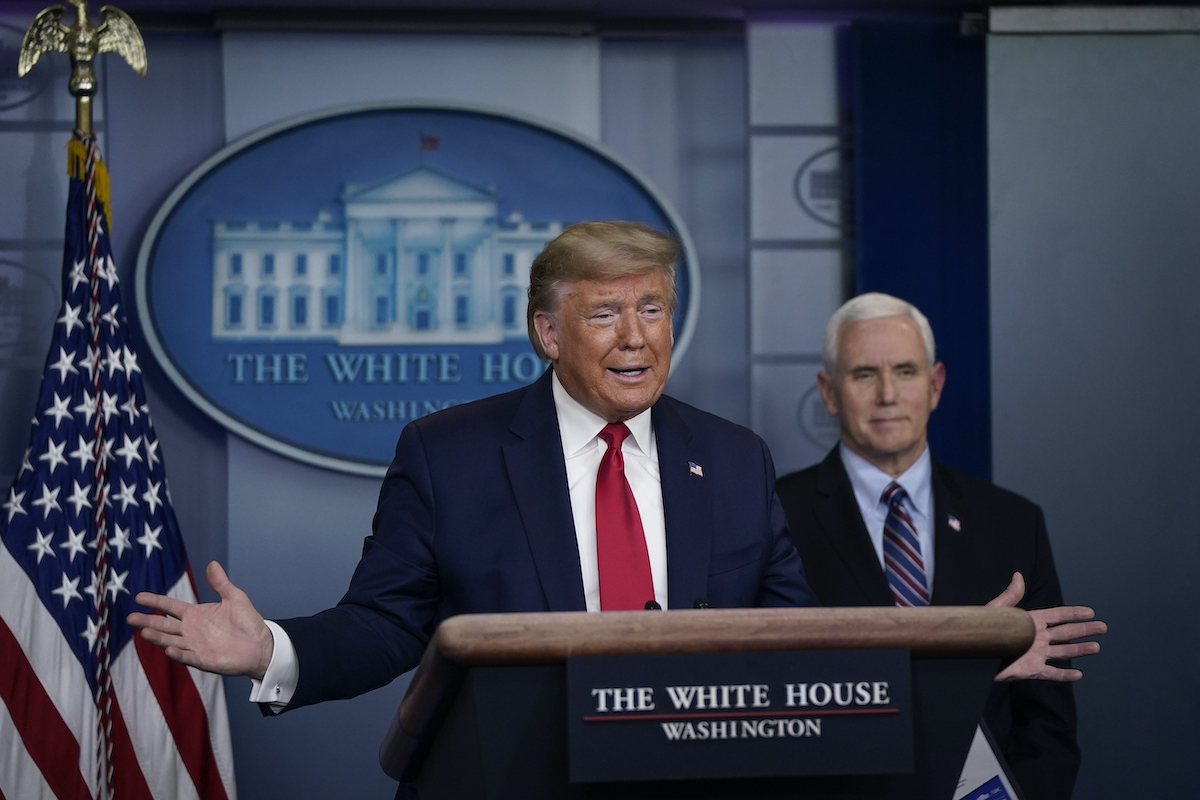 If I didn’t know better, I would swear Donald Trump wants his supporters to die. That might explain why he says he wants to force states to declare houses of worship essential services, so that more people can go to church and spread more COVID-19. Yes, in a typically petulant, ignorant, and dangerous statement, Trump says he’s issuing guidance deeming places of worship essential services. Luckily for those of us that enjoy life, he can’t actually force states to listen to him.

Trump made the proclamation today in yet another baffling press conference. He made sure to make this a partisan issue, playing to his conservative base by claiming that “some governors” have deemed liquor store and abolition clinics essential, but not churches, and it’s an injustice he has to make right.

TRUMP: “Some governors have deemed liquor stores & abortion clinics essential, but have left out churches … it’s not right. So I am correcting this injustice & am calling houses of worship essential. I call upon governors to allow churches & places of worship to open right now” pic.twitter.com/e0VU8XeLEm

Before we dig into everything wrong here (and there is a lot), I do think we have to savor the visible discomfort Trump exhibits when he has to include mosques in this declaration. It must be hard to set aside his virulent Islamaphobia in order to make a symbolic gesture to suck up to Christians that will endanger the lives of all Americans.

And this is a very dangerous declaration, make no mistake about it. Religious services are high-risk activities. Unlike, say, going to a liquor store or even a clinic, a religious service could involve dozens, if not hundreds of people in an enclosed space, sharing germs and perhaps even shaking hands or sharing food and beverage (when you think about it, communion is an infectious disease nightmare!). There is a reason they have been canceled.

And what’s more, they are not essential, sorry to say. God does not want you spreading coronavirus, I assure you, and she would much rather you stay safely at home and worship from afar than engaged people by gathering in a large group.

Trump is clearly trying to curry favor with the religious right and others intent on pushing states to “reopen America” sooner rather than later, and this is a good way to do it. Why? Because this makes him look like a defender of the faith, but it very likely won’t have any real consequences because Trump doesn’t have the actual power to force any states to deem churches or other houses of worship essential.

Despite Trump’s bluster, and his claim during the press conference that “If they don’t do it, I will override the governors,” he actually has no such recourse, thanks to that pesky Constitution he hates so much and may have never read. Even later in the same briefing, Coronavirus Task Force Coordinator Dr. Deborah Birx and White House press secretary Kayleigh McEnany affirmed that reopening and designation of essential services is at the discretion of governors, not Trump.

The fact that they didn’t say the president would violate the constitution though doesn’t get them off the hook. While taking questions (which Trump refused to do), McEnany insulted reporters by saying they didn’t want people going to church when they had the audacity to ask if it was safe.

This is such a hideous and inappropriate thing to say. And just wrong. Many journalists are people of faith. It’s also our job to ask if it’s *safe* for people to go back to churches and other houses of worship. https://t.co/YCdjCSM5Cg

One might hope that governors and faith leaders will want to keep people safe, but we can’t be sure. It’s likely that some states or governors will take this as an excuse to open up religious services and worship, which is dangerous and bad. Let’s pray (safely from home) that they see sense and don’t listen to this false prophet when it comes to what’s safe.

—The Mary Sue has a strict comment policy that forbids, but is not limited to, personal insults toward anyone, hate speech, and trolling.—
&nbsp