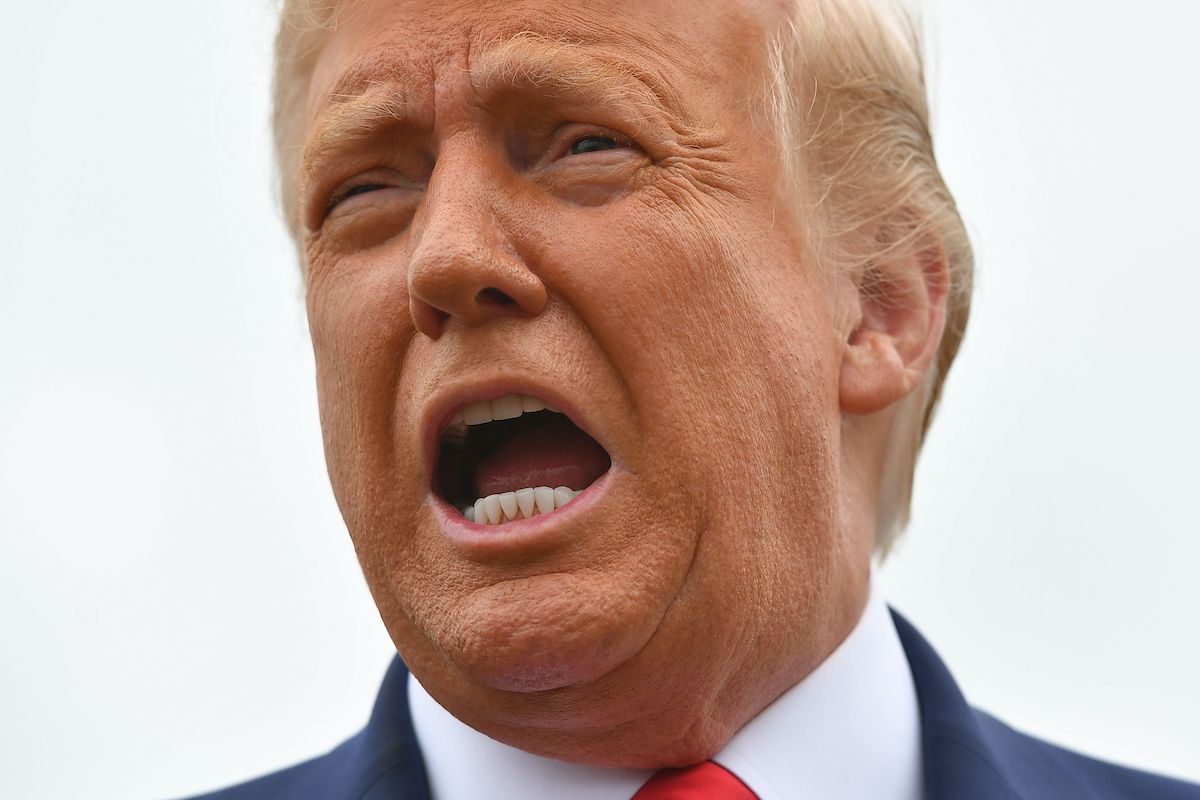 For months, Donald Trump has been claiming the November presidential election will be rife with voter fraud. How is he planning to prove that’s true? By encouraging his supporters to commit voter fraud, apparently!

In regard to the idea that 600,000 people could vote by mail in North Carolina, Trump says those people will have to “go and check their vote by going to the poll and voting that way.” He says that “if it tabulates, then they won’t be able to do that.”

“So let them send it in and let them go vote, and if their system’s as good as they say it is, then obviously they won’t be able to vote. If it isn’t tabulated, they’ll be able to vote,” Trump said.

“If it’s as good as they say it is, then obviously they won’t be able to vote. If it isn’t tabulated, they’ll be able to vote. So that’s the way it is. And that’s what they should do,” he said.

That is … not how anything works.

First of all, in North Carolina, absentee ballots must be received by 5 pm on Election Day (November 3rd), although, as is the case in many other states, if they are returned in a postmarked envelope, they will still be counted if that postmark is dated on or before November 3rd and received by November 6th.

This is why we should all be preparing ourselves not to have results available on Election Night, and also why a person might be able to send in their absentee ballot and still show up to the polls without it having been recorded yet.

Also, if that ballot has been received but a person still wants to vote in person, poll workers are legally not allowed to turn them away. If a person asks for a provisional ballot, they must be given one. So it is totally possible for people to vote twice. Here’s the thing, though: There are safeguards in place that have been shown to work extremely well that catch the rare instances of double voting. And not only will those votes then be discarded, but that person can be charged with a felony.

Crystal Mason, a Texas mother, was sentenced to five years in prison for casting a provisional ballot in the 2016 election, not knowing that she was ineligible to vote. That was an accident but Trump is now encouraging his supporters to do the same thing on purpose.

The North Carolina Board of Elections weighs in on the @realDonaldTrump suggestion to vote absentee and at the polls, saying: “It is illegal to vote twice in an election.” A felony, as it turns out. pic.twitter.com/cS7dezlIbA

In addition to recommending voters commit felony voter fraud, Trump is also committing a felony just by making that suggestion. In North Carolina and a number of other states, it’s illegal to “induce” another person to vote more than once.

I’m sure Trump will say at some point that he was joking or something—although no one could watch him make this double voting suggestion and reasonably infer from his tone or words that he was anything but serious—but plenty of people have listened to his “sarcastic” advice in the past and chosen to follow it, sometimes to their own detriment or even death.

Donald Trump is so committed to the idea of this election being invalidated by voter fraud that he is now the person creating that fraud.

A reminder: It’s illegal to vote twice. But not to impeach twice.