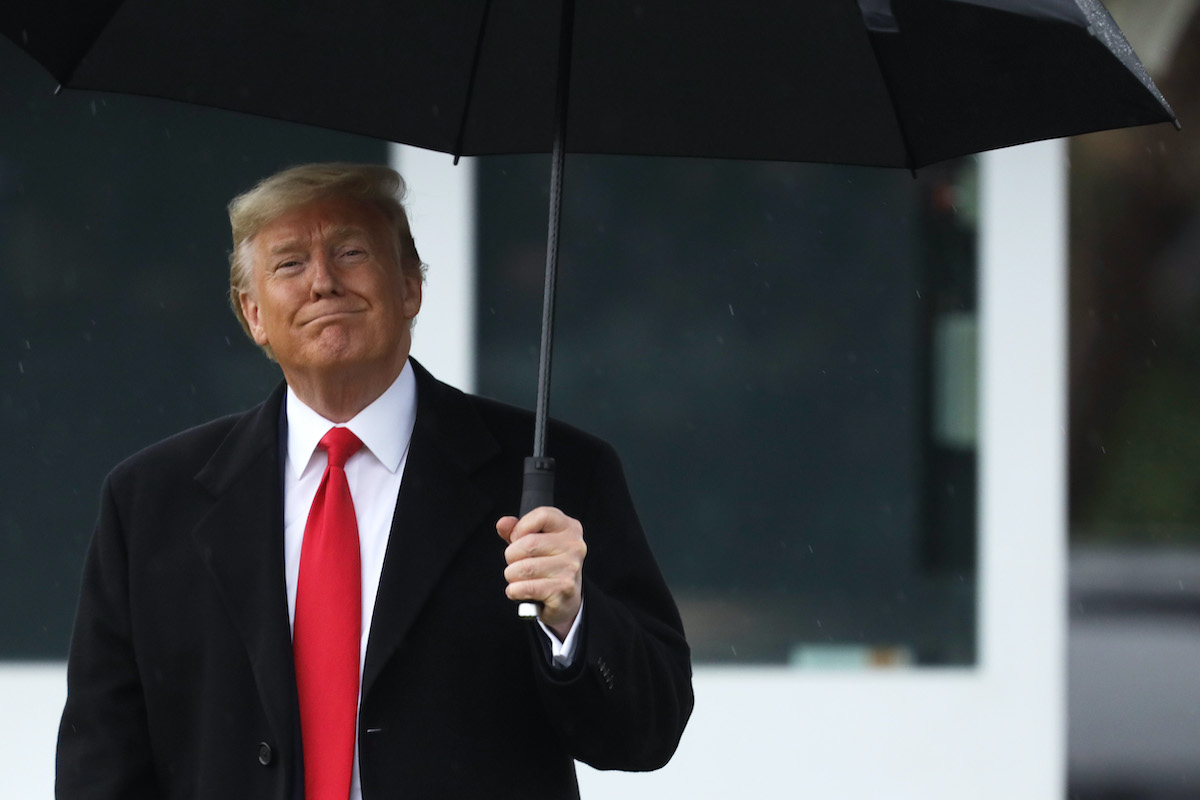 Unsurprisingly, the man with the large back tattoo of Richard Nixon is still causing problems, even on his way to prison.

Yesterday, all four of the prosecutors in the case against longtime Trump ally Roger Stone abruptly resigned after the Justice Department came in and overruled their sentencing recommendation. The prosecutors had suggested that Stone serve between seven and nine years–a standard punishment for the litany of crimes he committed. But then Donald Trump went and tweeted his displeasure and hours later, the Justice Department overruled the recommendation.

This is a horrible and very unfair situation. The real crimes were on the other side, as nothing happens to them. Cannot allow this miscarriage of justice! https://t.co/rHPfYX6Vbv

Trump has denied that he interfered in the case, saying it wasn’t him, it was the DoJ, as if his very public tweet (not to mention any other conversations that might have happened privately) had nothing to do with it. He also told reporters that if he wanted to interfere, he could, claiming “I have the absolute right to do it.” (He does not.)

Trump also used Twitter to congratulate Attorney William Barr for the interference. He also attacked the prosecutors, insinuating that they had been caught in some sort of shady operation, since the case against Stone stemmed from Robert Mueller’s investigation, which, according to Trump, makes it inherently invalid and even criminal.

Congratulations to Attorney General Bill Barr for taking charge of a case that was totally out of control and perhaps should not have even been brought. Evidence now clearly shows that the Mueller Scam was improperly brought & tainted. Even Bob Mueller lied to Congress!

Two months in jail for a Swamp Creature, yet 9 years recommended for Roger Stone (who was not even working for the Trump Campaign). Gee, that sounds very fair! Rogue prosecutors maybe? The Swamp! @foxandfriends @TuckerCarlson

Who are the four prosecutors (Mueller people?) who cut and ran after being exposed for recommending a ridiculous 9 year prison sentence to a man that got caught up in an investigation that was illegal, the Mueller Scam, and shouldn’t ever even have started? 13 Angry Democrats?

For years, Trump has been obsessing over a half-hour conversation between Bill Clinton and then-AG Loretta Lynch that occurred about a decade and a half after Clinton left office. The two spoke in a private plane while it sat on a tarmac, and Lynch later testified to Congress that they talked mostly about their children and other friendly subjects.

But the conversation happened just a few days before the FBI closed the case on Hillary Clinton’s private email server, so Trump is convinced that that’s what was discussed on that plane. He has repeatedly claimed without a speck of evidence that it was proof of corruption and a conspiracy against him. Because apparently, corruption in the Department of Justice is something that really concerns him, unless he’s the one doing the corrupting. Meaning it’s less concern and more jealousy.

Trump is (and has been for a while now) treating Barr like his own personal lawyer, which is absolutely not the role of the Attorney General. Back when Jeff Sessions was the AG, Trump didn’t hide his frustration over Sessions’ unwillingness to put his loyalty to Trump over his actual job. Barr, though, seems to have embraced the position wholeheartedly.

Democratic lawmakers are now calling on Barr to resign, which is definitely not something he’s going to do, but I suppose we should still go through the process of saying it, for the sake of those shattered norms.

By tweet @realDonaldTrump engaged in political interference in the sentencing of Roger Stone. It is outrageous that DOJ has deeply damaged the rule of law by withdrawing its recommendation. Stepping down of prosecutors should be commended & actions of DOJ should be investigated.

To the DOJ Inspector General:

I’m calling for an immediate investigation of why the Roger Stone sentencing recommendations by career prosecutors were countermanded.

The American people must have confidence that justice in this country is dispensed impartially. pic.twitter.com/vaBtC1FlUI

👇🏾This is not just rhetorical. DOJ and the Attorney General need to explain this, immediately, and offer documentary proof to back it up. https://t.co/OWsQFr1xsE

Congress must act immediately to rein in our lawless Attorney General. Barr should resign or face impeachment. And Congress should use spending power to defund the AG’s authority to interfere with anything that affects Trump, his friends, or his elections.