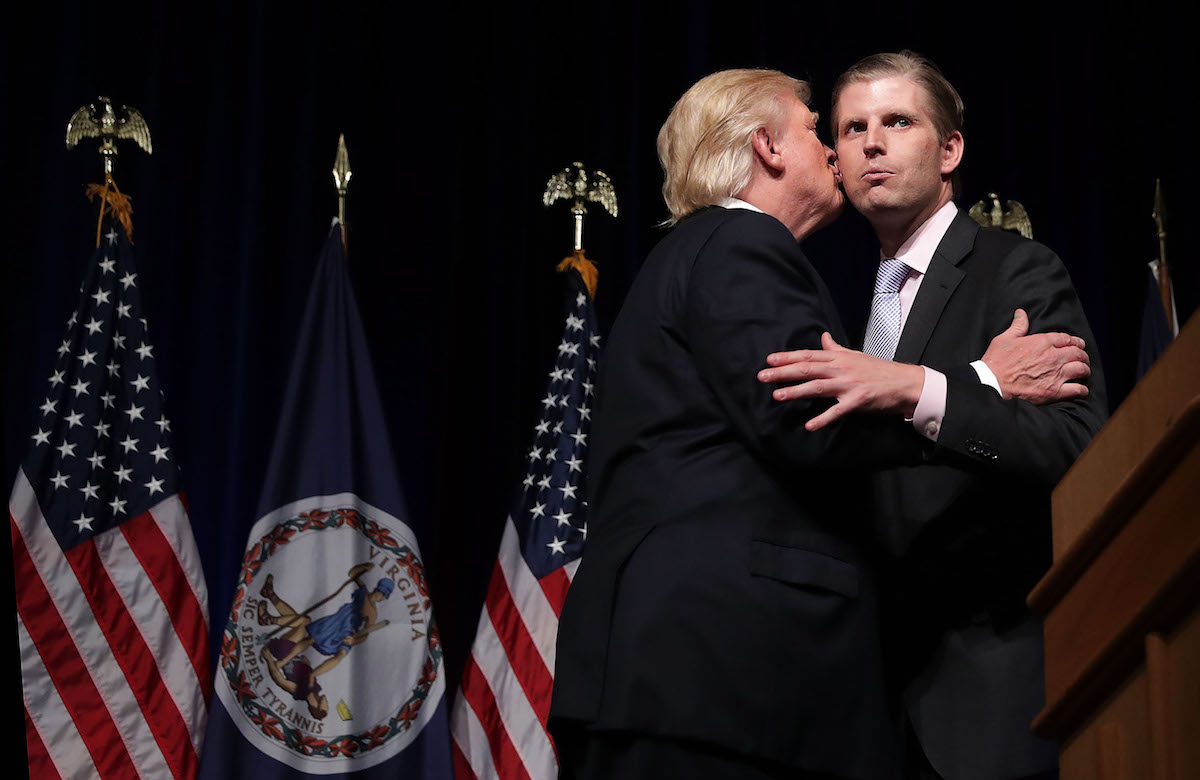 The world has been keeping a close eye on how the details of Stormy Daniels alleged affair and following non-disclosure agreement (NDA) unfold. In August, President Donald Trump’s former attorney, Michael Cohen, pleaded guilty to eight counts of fraud and possibly incriminated Trump by admitting to paying Daniels hush money, but now it looks like another domino is about to fall. According to the Wall Street Journal, Trump reportedly directed Eric Trump to keep the alleged affair under wraps.

People familiar with the events surrounding Daniels NDA and “pay off” have told the Journal that Trump directed both Cohen and Eric to find a way to stop Daniels from discussing the alleged affair. In a February 2018 phone call, Trump reportedly asked Cohen to seek a restraining order that would keep Daniels from talking to the media, and instructed Cohen to work on it with Eric who then hired a Trump Organization attorney to help with the paperwork, according to the Journal. The Mary Sue reached out to the White House for comment but did not immediately hear back.

Sources told the Journal that in February,  Eric put in a request to file arbitration documents against Daniels, and was also reportedly responsible for putting together a response to media outlets who asked about the arbitration the next month.

Daniels claimed that just before the 2016 election, she was paid $130,000 by Cohen in exchange for her silence surrounding her alleged 2006 affair with Trump, a claim that Trump has denied. Prior to striking deal with Special Counsel Robert Mueller, Cohen claimed that he paid Daniels out-of-pocket on his own volition, according to The New York Times. In a March interview with Vanity Fair, Cohen claimed that he did it only to help Trump, that neither the president or the Trump Orginization played any role. He stated,

Cohen, however, didn’t hum the same tune forever. Once it came time to give his testimony in August — under the guidelines of his plea deal — he admitted to paying Daniels (as well as Karen McDougal who also alleges an affair with Trump), “in coordination and at the direction of a candidate for federal office.” Cohen’s attorney, Lanny Davis, later clarified in a tweet that Cohen swore under oath that it was Trump who told his client to make the payments.

Today he stood up and testified under oath that Donald Trump directed him to commit a crime by making payments to two women for the principal purpose of influencing an election. If those payments were a crime for Michael Cohen, then why wouldn't they be a crime for Donald Trump?

With Cohen’s testimony and this new Journal report it looks like all arrows are bright, shining, and pointing directly at Trump. But then again, did anyone every truly believe that he wasn’t at all involved in all of this? I’d bet no.