Cranberries Singer Dolores O’Riordan, a Unique and Memorable Female Voice, Has Died at the Age of 46 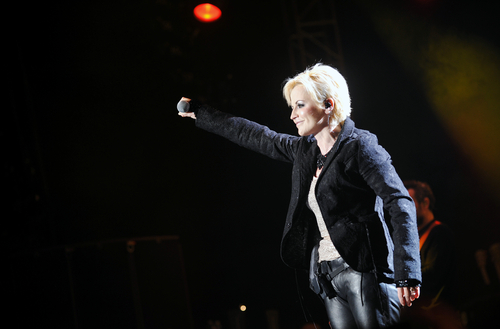 Yesterday marked the tragic death of one of rock’s most unique and memorable female voices. Dolores O’Riordan, lead singer of the band The Cranberries, died suddenly at the way-too-young age of 46.

The Limerick native was found in a Park Lane hotel in London yesterday morning after someone called police reporting that “a woman in her mid-40s” was found dead in one of the hotel’s rooms. As of right now, O’Riordan’s death is not being treated as suspicious by London police, and they are compiling a report to give to the coroner to investigate the cause of death.

The Cranberries’ publicist explained in a statement when announcing her death yesterday that “the lead singer with the Irish band The Cranberries was in London for a short recording session. No further details are available at this time. Family members are devastated to hear the news and have requested privacy at this very difficult time.”

The Cranberries shot to stardom in 1993 with their debut album, Everybody Else Is Doing It, So Why Can’t We?, which went on to sell over 40 million copies. The band split in 2003, when O’Riordan briefly pursued a solo career, but then reunited in 2009. In May of last year, The Cranberries were out on a European tour when the band had to cancel their remaining dates due to health issues O’Riordan was experiencing.

The band’s official website said they were canceling because of “medical reasons associated with a back problem.” However, O’Riordan seemed to be feeling better by December 2017, and she posted this message to the band’s Facebook page:

She said, “Hi All, Dolores here. Feeling good! I did my first bit of gigging in months at the weekend, performed a few songs at the Billboard annual staff holiday party in New York with the house band. Really enjoyed it! Happy Christmas to all our fans!! Xo.” It ended up being the last post she wrote for the page before she died.

O’Riordan’s bandmates were, of course, devastated, and expressed themselves on social media:

We are devastated on the passing of our friend Dolores. She was an extraordinary talent and we feel very privileged to have been part of her life from 1989 when we started the Cranberries. The world has lost a true artist today.
Noel, Mike and Fergal

She had an ex-husband in former Duran Duran manager Don Burton, to whom she was married for 20 years before they got divorced in 2014, and they had three children together. Duran Duran expressed their sympathies upon hearing the news as well:

We are crushed to hear the news about the passing of Dolores O’Riordan. Our thoughts go out to her family at this terrible time. https://t.co/6p20QD2Ii5 pic.twitter.com/vXscj0VGHS

She was the pride and joy of her home town of Limerick, Ireland. Parish priest of O’Riordan’s hometown, Father James Walton, said that she would be buried in Ireland. “Her family are still waiting for more details to come from London about her death,” he explained. “The plan is for her to be buried here at home. When that will be will depend on when her body is released.”

Meawhile, Irish president, Michael D Higgins, called her death a “big loss,” saying that her music with The Cranberries “had an immense influence on rock and pop music in Ireland and internationally.” Taoiseach (Irish Prime Minister) Leo Varadkar called her “Limerick’s greatest ever rock star,” and that her band “captured all of the angst that came with your teenage years.”

She certainly captured the angst of my teenage years. “Linger” was probably the Cranberries song I sang along to the most when I was in high school, whenever I was pining over my latest crush. Of course, I did my best to imitate O’Riordan’s distinctly Irish lilt to no avail, but it sure as hell felt good to sing when I was feeling my powerful teenage feelings.

Fans from all over the world, from the celebrity sphere to non-famous folks like me for, whom The Cranberries were a part of the soundtrack of their lives, have expressed their sympathies on social media:

I once met Delores O’Riordan when I was 15. She was kind and lovely, I got her autograph on my train ticket and it made my day. She had the most amazing voice and presence. So sorry to hear that she’s passed away today x

Oh, my life
Is changing everyday
In every possible way…

My first time hearing Dolores O’Riordan’s voice was unforgettable. It threw into question what a voice could sound like in that context of Rock. I’d never heard somebody use their instrument in that way. Shocked and saddened to hear of her passing, thoughts are with her family.

That voice. So powerful yet vulnerable and raw. Beautiful. #DoloresORiordan pic.twitter.com/3EYQqjE364

My deepest sympathies to the family of Dolores O’Riordan who tragically passed away today. RIP

One of my fondest memories is from a couple of years ago, when I was visiting family and friends in New York, and I was driving around with some of my BFFs late at night after having spent a night out at a pub. The Cranberries’ “Zombie” came on, and this car full of Latinx driving around Queens suddenly burst out singing along, doing our best to keep up with O’Riordan’s amazing howling delivery.

It’s a protest song specifically about the bombings that took place during the conflict in Northern Ireland, and yet O’Riordan’s voice manages to capture so much pain in it that the sound of that song can be applied to any pain you’re feeling. At first, my friends and I started singing along for fun, but as we kept going the car got quiet between vocal parts and we were all deep in it. The song had transported us. Good music does that.