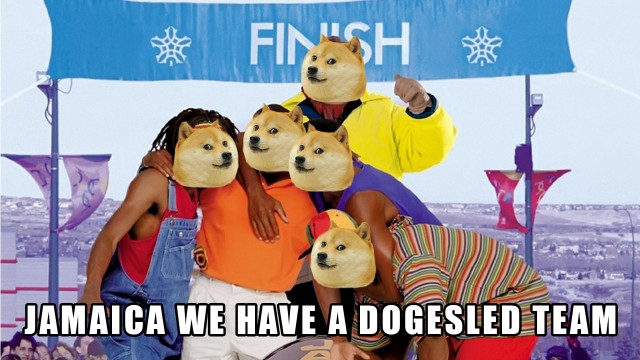 The Jamaican bobsled team needs help to raise $80,000 so they can participate in the Sochi Winter Olympics. “Dogecoin” is a ridiculous cryptocurrency based on the popular “doge” meme, in which shiba inu dogs misspell things in colorful comic sans font. It only makes sense that these thing would eventually overlap. This is, after all, the Internet.

After news of the bobsled team’s plight reached the perked-up ears of the Dogecoin subreddit, the moderators got to work setting up a donation page for other fans to contribute — not just to help a Cool Runnings-reminiscent underdog(e) team achieve their dreams, but also to “promote dogecoin on the world stage.” Within hours, the fundraiser had collected 26 million Dogecoin, inadvertently raising the Dogecoin to Bitcoin exchange rate rose by 50%.

Dogecoin founder Jackson Palmer  (ummjackson on Reddit) and co-manager Liam Butler  (Laika1954)  immediately got to work converting the currency, and confirmed about six hours ago that they’ve transferred the Dogecoins into 35 BTC. By the current going rate, that’s about $30,830 USD.

Currently the Dogecoin moderators are strategizing the best way to move forward, as “US taxation laws would make it inconvenient to convert to a personal USD account to make the donation,” according to Butler.

While they sort that out, you can still donate to the team on Indiegogo (where they’ve raised $15,000) and CrowdTilt ($25,000). Or you can donate your dogecoins to the Dogesled account, if you’ve got ’em. Either way, it’s all going to a good cause.