Nurse Joy would be proud. 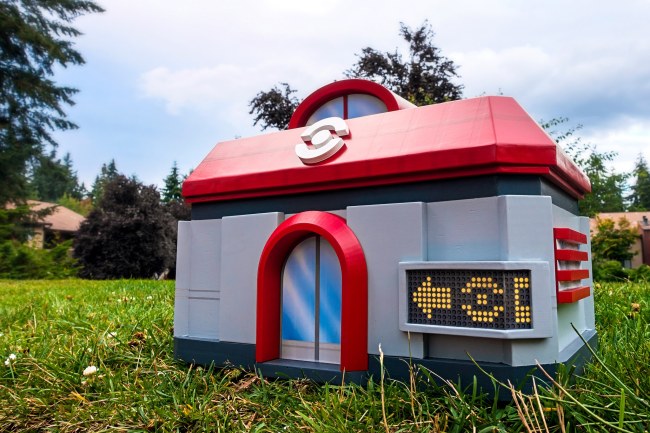 Catching all the electric-type Pokémon in the world won’t help your poor phone’s battery, and even your backup battery will eventually fail you. That’s where the Pokémon Center charging station comes in. Gyms and Pokéstops full of in-game items aren’t the only thing for players to congregate around, thanks to this handy Pokémon-themed accessory.

The Pokémon Center charging station was built by Spencer Kern, who had his love of Pokémon rejuvenated—like the rest of us—by Pokémon GO and its ability to bring Pokémon fans together in the real world. Kern wrote on the charging station’s project page, “[A]fter spending hours running around my local park with a few hundred people I knew this was a special moment in gaming history. The sense of community that popped up around the game inspired me to start up a quick project to provide a fun “water cooler” style social hub for people playing the game. To do this I thought it would be fun to re-create a Pokémon Center from the main games and use it as a charging station for trainers to hang out and heal their power drained phones.”

In an ideal world, we’d have one of these installed at every Pokéstop, but if other issues surrounding Pokémon GO haven’t tipped you off, we don’t live in an ideal world. Instead, it’s up to dedicated players to build their own, and they’ll need some 3D printing and woodworking skills to follow Kern’s lead, but the end result looks pretty well worth it. Not only does the Pokémon center look good, but the housing is built around a battery, so it can provide players with the precious lifeblood of their phones even in areas where it can’t be plugged in—like out in all that tall grass Pokémon have been known to hide in.

(via Kotaku, image via Spencer Kern)