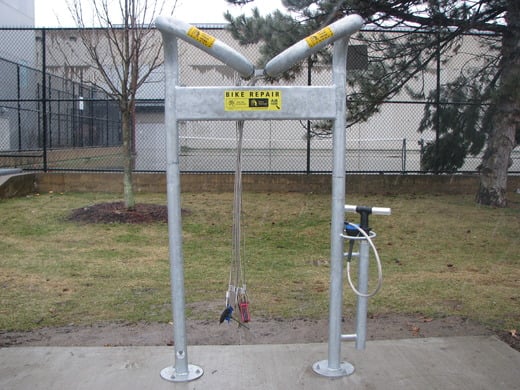 Cambridge, Massachusetts has come up with a creative way to support its increasingly bike-loving populace and to encourage people to opt for green transport. The city has installed three bicycle repair stations around town. Cyclists can drop by the spots in Harvard Square and make minor repairs or inflate their tires. Cambridge’s transportation manager says the city was inspired by MIT, which already had bike repair stations.

The stands provide tire gauges and pumps, Allen wrenches and a few other tools that enable cyclists to make minor repairs, such as adjusting seats or handlebars.

Each station cost the city about $1,000 and Seiderman said the city got the idea from MIT which has already installed repair stations around its campus.

The installation of the repair stations comes as the city has seen a growing number of people riding bikes through Cambridge. A study conducted by the city estimates that the number of people bicycling in Cambridge more than doubled between 2002 and 2008, based on a study of the number of cyclists counted traveling through 17 different intersections. Seiderman said the number has continued to rise since 2008.

Some city residents are sore about that $1000 price tag: A Boston.com commenter writes, “oh c’mon people, can’t you carry your own tools? this is an eyesore and an embarrassment.” But local bikers unsurprisingly love the idea.