Diversity Only Possible When We See It as an Advantage, Instead of as A “Problem to Be Solved” 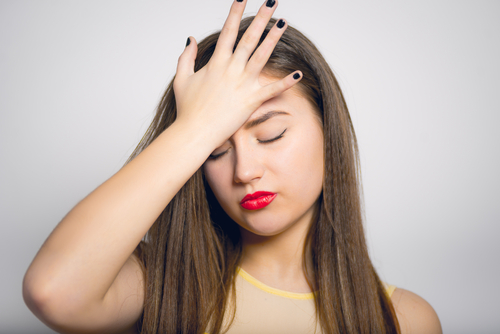 For all that people are talking about the importance of diversity across all fields, it seems that there are always those willing to pay the idea lip service while remaining apathetic and short-sighted. What’s sad is that it’s the people that are supposedly the most creative and imaginative that are guilty of being the most myopic.

The Huffington Post ran a story today that pulled no punches with its headline: “Facebook Gives Pathetic Excuse For Its Diversity Problems.” In it, they link to a Facebook blog post written by Maxine Williams, Facebook’s global head of diversity, who focused on the positive trends at Facebook: their commitment of $15 Million to Code.org in order to get people more access to a computer science education and putting most of their focus on the “pipeline” problem in technology—meaning that marginalized people don’t often have access to the education they’d need to succeed in tech early on, which translates into there not being enough diversity the higher up the ladder.

This is a legit problem; don’t get me wrong, but here’s the thing: Not all jobs at Facebook are computer science related. There are plenty of non-tech jobs at the company, yet even these are overwhelmingly white. Overall, Facebook’s workforce in the US is 52% white, 38% Asian, 4% Latinx, 2% black, and the rest is mixed race and “other.” When looking only at the non-tech jobs, the percentages get worse. There, 60% of the work force is white, 25% is Asian, etc, etc.

As far as gender is concerned, they provide the global statistics for Facebook, and they ain’t too pretty. Overall, Facebook’s global workforce is 67% male and 33% female (no figures exist about trans or gender non-conforming employment, natch). While tech jobs are overwhelmingly male, there’s something closer to gender parity in non-tech jobs with 53% of their non-tech work force consisting of women, and 47% being men. Where the numbers are really staggering, however, are in leadership positions. Globally, Facebook’s leadership positions are held by 73% men and only 27% women.

If a company is prioritizing diversity, shouldn’t they be prioritizing it everywhere? Does the “pipeline” excuse apply to receptionists, office managers, HR people, or account managers? Does someone need to have taken the Computer Science AP exam to apply for those jobs at Facebook? Or, is it that the unconscious bias goes so deep that not only do they hire a majority-white tech department, but that they want to surround those people with a majority-white support staff?

As far as their tech jobs, Facebook talks about their commitment to aiding the pipeline, but they’ve made no solid commitment to hire from that pool once those people get that tech education they didn’t previously have access to. It’s all very well and good to broaden the access to a computer science education … but then you need to recruit and hire those people. 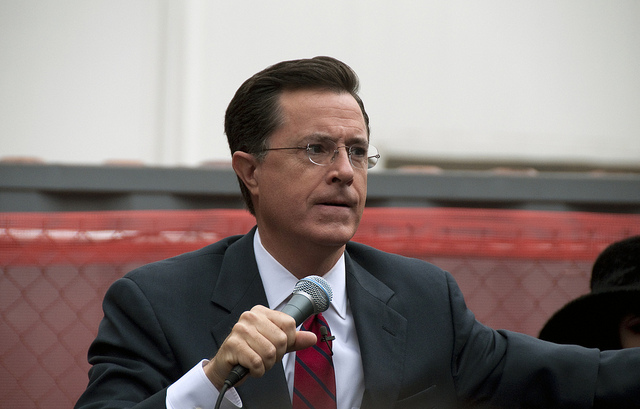 Meanwhile, in the world of late-night television, Stephen Colbert recently did a video interview with Buzzfeed where he was asked point-blank about the lack of diversity in his writers’ rooms (both at The Colbert Report and on the Late Show with Stephen Colbert), despite the fact that he claims to care and want to do something about it. His answers were less-than-thrilling, and he seemed to be confused about what he was expected to do about it. Because clearly it’s the world that’s doing this. He has zero control over the staff on his own shows that literally have his name on them.

When asked about the diversity of his writer’s room, Colbert said:

“I’m all for it. I’m all for it. I mean, I have a very white writer’s room. It is not intentional. I wouldn’t claim that there isn’t some unconscious bias that I don’t know about, but I don’t read who’s on the packet. I don’t look at the name. I don’t look at the resume. I just read the jokes. If the jokes make me laugh, then I go ‘Who is this person? We should call them.’ And you know, I’ve had a pretty stable writing staff for the last ten years. We haven’t had a ton of turnover. At least for one of these shows it’s actually one of the lowest turnovers. And you know, I’ve had mostly men but I’ve had five women write for me. Two of them are my favorite writers in the world.

I’ve had very few people of color write for me and I don’t know why. It’s not intentional and I would like that to change. But I think it might be insulting to the person submitting to me if I hired them for that reason. But I would really like it to be the case because I think that we are missing some voice in America by not having that in the room. That there’s something I don’t understand about our country by not having that in room.”

However, as Jezebel points out in their report, Full Frontal with Samantha Bee also has a blind submissions hiring process, and yet still maintains a writing staff that is “50 percent female and 30 percent nonwhite.” Making something a real priority makes a difference.

And to white people out there in a position to make decisions about hiring—the mere mention of differences is not insulting. What’s insulting is “being color blind.” What’s insulting is pretending that difference doesn’t exist so that you have an excuse for not seeing or considering people who don’t look like you. “Color blindness” is still blindness … and not to get biblical about it, but Matthew 15:14 says, “If the blind lead the blind, both will fall into a pit.” (Colbert is a practicing Catholic, so I’m hoping he appreciates that.)

A while back, I wrote a post about this awesome speech on diversity that Idris Elba gave at Westminster. In it, among other wonderful points, he talks about the idea of “diversity of thought.” That diversity is not just a matter of numbers, it’s a matter of how we think. 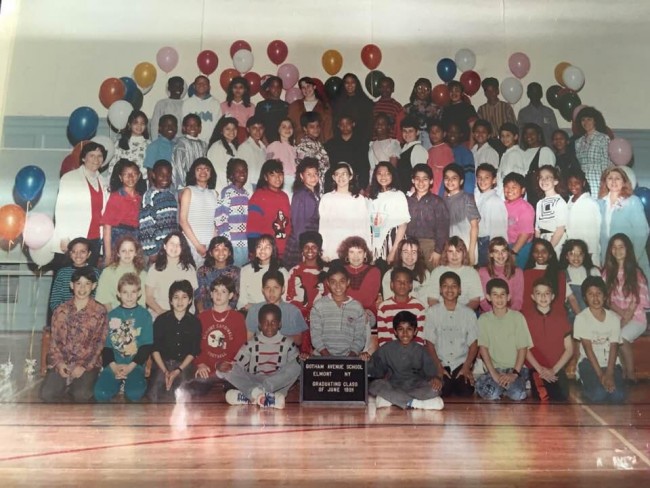 image courtesy of Yours Truly

This was my sixth grade class at Gotham Avenue School in Elmont, NY, which is in Nassau County, the beginning of “Long Island.” (See if you can spot me – hint: top row!) It’s suburban. And by the time this class got to junior high and high school, our graduating class was 51% “minority.” Not only that, but I was ranked about 35 in my graduating high school class of several hundred, and I had an above 90 average. Above-90 averages appeared a long way after me on the list, too. Meaning that my graduating class, diverse as it was, was also a bunch of nerds. We were overachievers, honor students, dreamers. We ended up becoming doctors, lawyers, teachers…and writers. We were smart, and all of us expected to go out into the world and be rewarded for our hard work.

So, when people talk to me as if achieving diversity in any field is this unfathomable, insurmountable thing, I literally do not understand the words coming out of their face holes. I grew up in a world where of course girls and people of color had a lot to offer, even though I had the kind of childhood that’s supposed to be at a “disadvantage.”  I went to public school. I lived in an average neighborhood. We didn’t come from wealthy, or even terribly comfortable backgrounds. And it happened anyway. My high school was a Nationally Recognized School of Excellence. We had mostly white teachers, and they didn’t look down on us because we were mostly students of color. They saw themselves in us. They had imagination and saw our potential, investing in all of us, and we thrived because of it. A lot was expected of us, we were given the opportunities, and we brought it.

So, it is unfathomable to me that it can’t happen elsewhere, that the idea of valuing difference is so foreign to too many. Not just “valuing it” so people stop yelling at you, but genuinely valuing it and seeing the bigger picture of how much better, richer, and in-demand your product will be the more diverse the minds behind it are.

By all means, let’s keep chipping away at the numbers. Numbers are measurable and manageable. However, we won’t achieve real change until the people in decision-making positions think differently. Until they inherently value difference, instead of thinking of it as a hurdle that needs to be overcome.