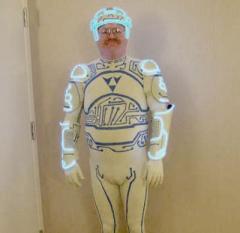 Disney Theme park and retail blog Stitch Kingdom notes that Disneyland California has put out an audition call for “male and female contemporary and hip-hop dancers” for a show tentatively titled ElecTRONica.

I just happened to visit Disneyland and California Adventure last week, and they currently have a nighttime party in the area with moving bars featuring light up cups. Is it possible that they are going to recreate the End of Line club in the park with castmembers in light-up Tron costumes and a parkour fight stunt sequence? Very …

Also, martial arts experience is a plus, just in case you were thinking about auditioning.

Of course, even if you’d just like to go see the putative show, there’s no indication that it will be playing anywhere but at Disney’s California park.  It almost certainly, however, won’t involve the gentleman pictured above.