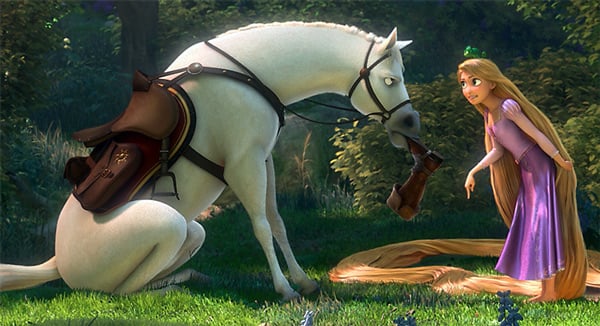 Disney animated films have kind of a reputation for being all about romantic relationships, and depending on who you ask and when, the focus on “happily ever after” can be interpreted positively or negatively. Even before Frozen made Disney movie history for making a sibling relationship the focal point of the story, however, the horses of Disney have been there, in the background, being quietly (and not so quietly – I’m talking to you, Maximus!) awesome and concerned for their humans (and also justice. Maximus. Yes, I’m talking to you again, you magnificent Beast of Justice.) Disney movies have been taking care to give their horses personality and spirit. Here is a list of my top five Disney horses who rock, along with some honorable mentions! 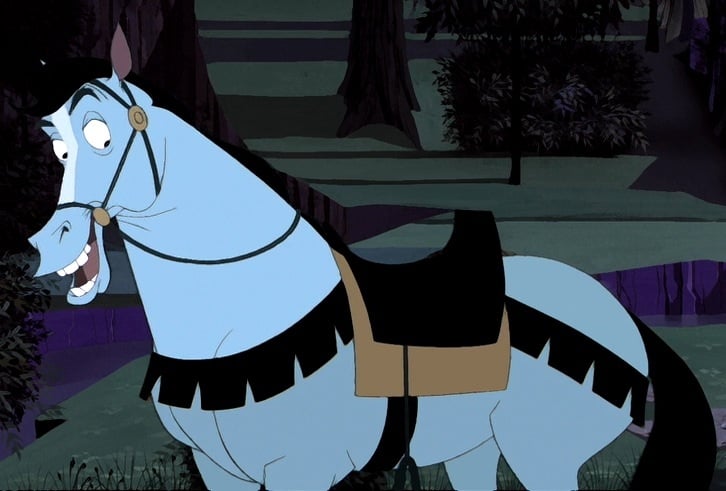 Not only was Prince Philip the first Disney prince to have an actual personality, he also had a delightfully sassy equine companion. When Phillip and Samson were riding through the forest, and hear Aurora singing in the distance, Samson isn’t interested in pursuing the source of the music until Phillip offers up some delicious treats as a bribe. Samson is totally into it, and off they go, chasing after the mysterious lady-music just like Prince Eric in The Little Mermaid. These Disney gents are such music lovers! 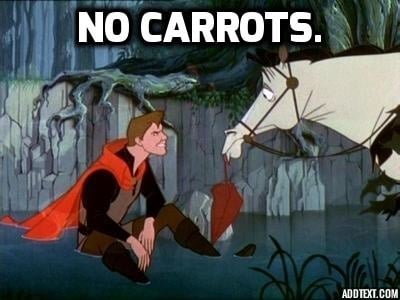 Prince Philip is not amused.

After their enthusiasm lands Phillip in the water and costs poor old Samson his carrots to comedic effect, Phillip manages to get his clothes stolen by woodland creatures who are trying their best to pretend to be a prince for human-contact-starved Aurora to get her dance on with. Can we pause here to talk about how adorable it is that Phillip just… talks to his horse? He’s out in the woods, talking to his horse, and Aurora is out in the woods talking to her owls and birds and bunnies and stuff. These two were made for each other!

Okay, back to Samson. When Phillip fights Maleficent, Samson charges in with him, through the thorns and scary green fire, and is shown neighing in concern when Phillip is forced to fight on foot. This is one horse who clearly shares a bond with his human companion and why he gets to start out the list. Samson and Philip’s bond and communication paved the way for all of the other horse-and-rider pairs in the Disneyverse. 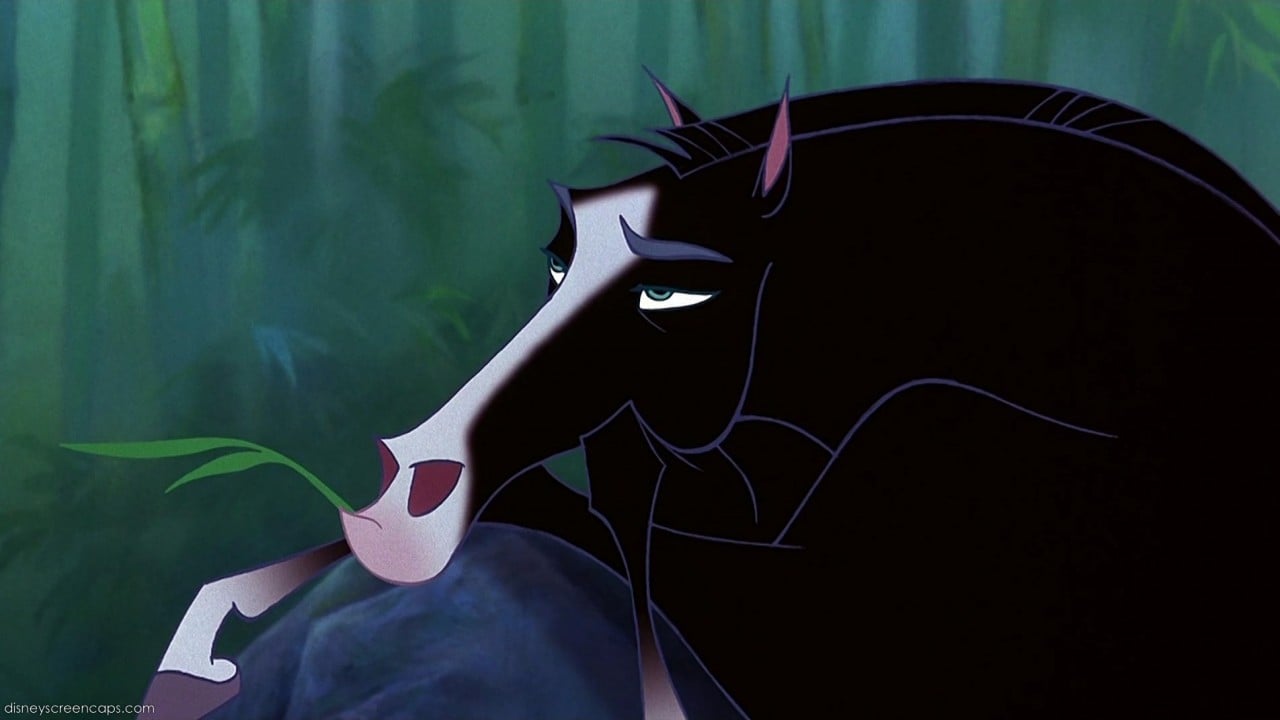 Khan is, in many ways, as much of a character and a hero in Mulan as the title character herself. Like Samson, Khan follows his human companion into battle without fear, and shows concern and devotion when his human is in danger. Khan’s reaction (he literally does a ROFL, that is, Internet-speak for “Rolling on the floor laughing) when she tries to “act manly,” for the first time makes Khan a Horse of Humor, and that makes me happy. 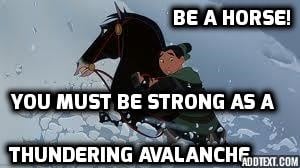 When Mulan braves the avalanche to save Li Shang, Khan acts on his own to rescue her. That’s a good horse, a brave companion, and brave warrior. 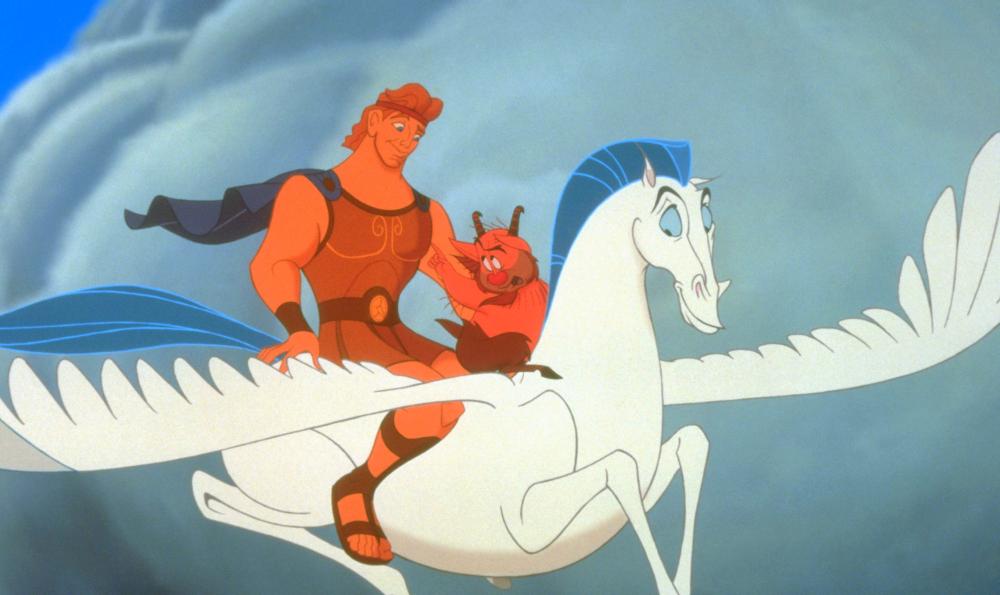 Okay, I get that mythology is a fluid, word-of-mouth kind of thing, and I get that some people really didn’t like the changes made to the mythology of Hercules (Heracles?) in Disney’s take on the tale, but there is no denying that baby Pegasus and baby Hercules are just about the cutest things that ever cuted. Look at them! No, LOOK at them! Not only were they basically made to be best buddies almost from birth, they’re little and snuggly together! Ridiculous.

When Hercules and Pegasus are reunited, they’re still like peas in a pod – almost more like brothers than horse and rider. Instead of giving each other the fist-bump of bro-itude, they often greet each other with a head bump, playing up the fact that they’re both probably a little braver and prettier than they are smart. One of my favorite moments is when Pegasus swoops in like a bird of vengeance to save Hercules from the Hydra (not the hailing sort), and they manage to make two of the heads head-bump each other. Pegasus and Hercules look at each other with genuine derp-faced glee as if to say, “That’s OUR thing! We made them do our thing!” It’s truly beautiful. 2.) Achilles, Phoebus’ horse in The Hunchback of Notre Dame

Speaking of Greek mythology, next up is Achilles. According to Disney, Achilles was almost a nameless horse, but for the, “Achilles, heel!” joke. After that, it was a mere hop, skip, and a jump over to the “Achilles, sit,” line that was possibly one of the funniest incidental comedy bits in a Disney movie. 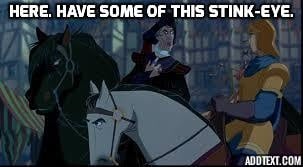 Phoebus casually having his highly trained, yet doggish warhorse sit on the guard still cracks me up. I re-watched it while writing this article, and it still makes me giggle. And, check out the epic stink-eye Achilles has for Frollo’s horse, who, according to a Disney wiki I was looking at, is named Snowball. 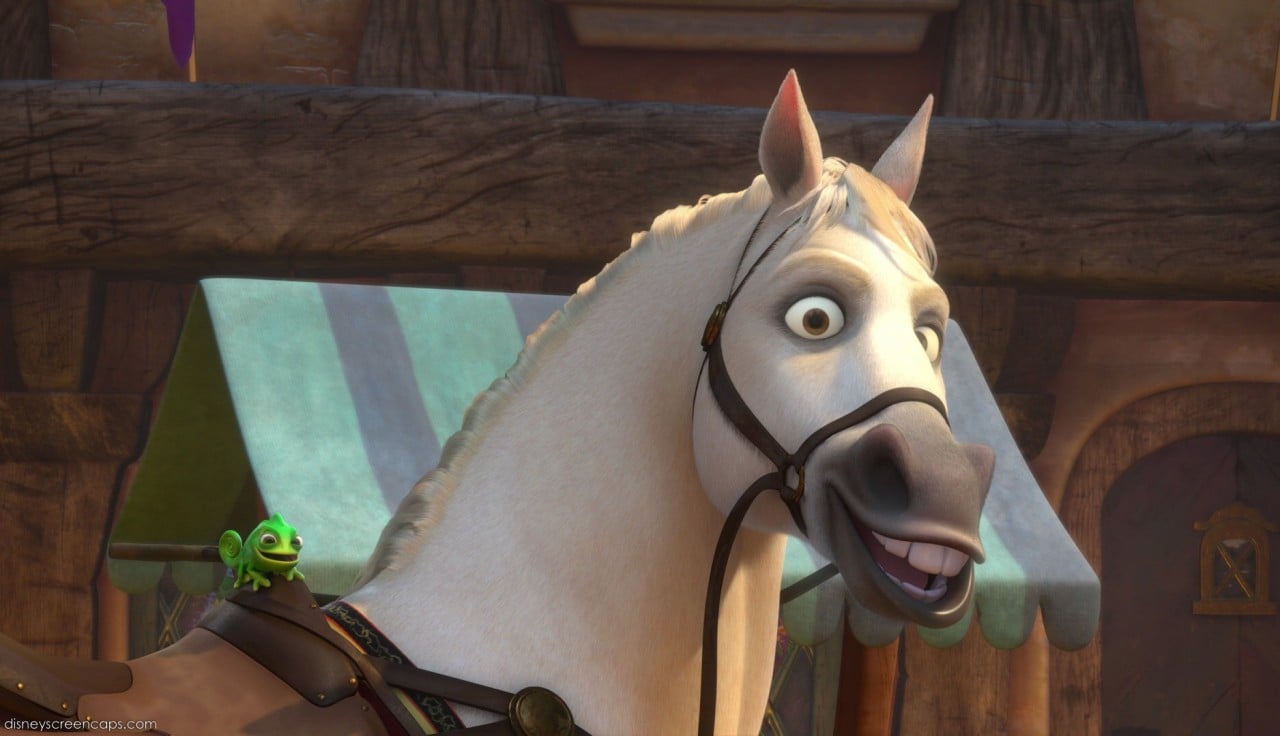 Ah, Maximus. Truly the King of Disney horses. Maximus, unlike the other horses on this list, isn’t really part of a human/horse duo. He was previously ridden by the former Captain of the Guard, but Maximus doesn’t need a human to do the job. Like Achilles, Maximus is a warhorse, presumably accustomed to complex instructions. Also like Achilles, Maximus can sit on command. I love the scene where Maximus is pursuing Flynn Rider and Rapunzel intervenes, gets him to sit, and strike a deal to hold off his one-horse manhunt until she gets to have her special day and see the lights.

As sympathetic and friendly as Maximus is to Rapunzel, he is decidedly unfriendly toward Flynn. This horse can literally smell crime and taste justice, and he’s relentless in his pursuit. He’s like McGruff the Crime Dog, Inspector Javert, and Batman in the body of a horse. He can even hold his own in a swordfight, and rivals Rapunzel in the category of skillet-fu. Over the time they all spend together, Maximus’ feelings toward Flynn mellow out as he notices his growing affection for Rapunzel. He may be the Beast of Justice, but he’s not without sentiment. Later in the movie, Maximus enlists the help of the ruffians (kind of) from the Snuggly Duckling (best name for a bar in ever) and busts Flynn out of jail so he can save Rapunzel from a lifetime of creepy, agoraphobic, hair-love from Mother Gothel. Maximus has my vote for Best of the Horses! 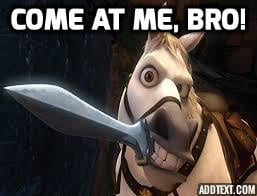 The horses in my top five don’t encompass all of Disney’s delightful steeds. Honorable mention goes out to Philippe, Belle’s horse in Beauty and the Beast. He may have been terrified in the wolf-infested forest, but hey, that’s nature. I’m terrified of wolves, and I’m unlikely to ever encounter one in the wild! And, despite his fear, Philippe bravely goes back in and even kicks some attacky-wolves! Philippe catches some crap in fandom upon occasion for being a scaredy-horse when compared with Khan and Maximus and the like, but those were trained warhorses, and Philippe was a domestic horse. He didn’t sign up for this, but he did his best, bless his horsey heart!

Also worth mentioning is Major, Cinderella’s horse who had been with her since she was a child and her father was alive. While Major does not have a large part in the movie, he seemed very proud to be chosen to drive the carriage rather than pull it for once! Merida’s horse Angus also seemed to have a strong bond with his rider as well, perfectly willing to facilitate her life goal of riding through the glen, firing arrows into the sunset indefinitely.

I’ve wondered how the horses of the Disney Humanverse and the horses of the Disney Animal-Underground-verse might cross over. I have this theory that movies like The Great Mouse Detective, The Rescuers, 101 Dalmations, Lady and the Tramp, and The Aristocats, are all part of the same universe, and could easily cross over. In 101 Dalmations, Captain is a talking horse of the Twilight Bark, who actively helps to rescue the puppies.

I can easily see this network of cool helper-animals being in touch with the Rescue Aid Society from The Rescuers. In my head, it’s one ‘verse. Frou-Frou from The Aristocats, like Captain, helps to defeat Edgar and restore the kitties to their rightful home. It seems that only certain human characters have knowledge of the Animal Underground. Penny, the little girl from The Rescuers, can talk to the mice and animals, and Cinderella is able to communicate with her mousie friends, but most of the humans remain unaware. I don’t think that Maximus, Achilles, and Samson exist outside of this continuum. Perhaps they, and other animal companions like Pascal, and Aurora’s woodland creatures, are sleeper agents? My nerdly fan-theory is that the underground is a thing throughout all of the movies. I intend to watch a lot of Disney to find evidence to support my claim.

Many thanks to the Horses of Disney for bringing this interesting theory to my attention. What do you think? Who are your favorite horses? Are my fan theories madness or genius? Reply in the comments, or tweet at me!