Dismantling the Media’s Myths About Schizophrenia 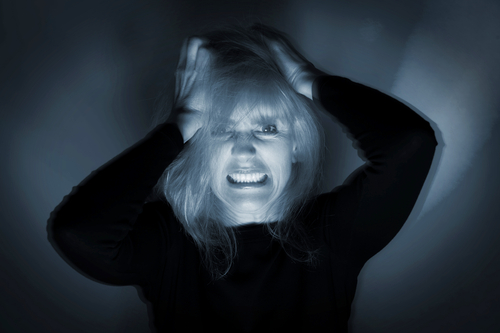 My debut novel Stay Crazy has aliens, alternate dimensions, and a hair dryer energy gun. However, it also has something else out of the ordinary: a protagonist with paranoid schizophrenia, who’s not sure if the paranormal events are real or not. She also has to deal with more mundane challenges connected to her disorder, such as a therapist who doesn’t quite understand her, medication side effects, and the constant fear that she’s going to kill someone. And while this is a work of science fiction, many of Emmeline Kalberg’s problems are all too real for people who actually have schizophrenia.

Originally, I didn’t create Em to challenge the traditional portrayal of characters with schizophrenia. But as I did my research, I found that there is a disappointing dearth of sympathetic characters who experience psychosis. Fantasy and science fiction are not immune to this; if anything, it’s worse in speculative fiction, as symptoms are usually chalked up to being either curses or gifts. After I discovered that, my mission became clear. Em’s schizophrenia not only had to be real, it also had to be accurate and respectful. I would subvert the myths and create a different type of character that you don’t see very often. The following are some of the biggest myths used in fiction to portray people with schizophrenia:

Myth #1: People with schizophrenia are violent.

Let’s get this one out of the way because it’s the easiest, but also the most damaging. People with schizophrenia or other mental illnesses are much, much more likely to be the victims of violence than the perpetrators. Full stop.

But you’d never know that from how the media portrays people with schizophrenia. When they’re shown in movies, books, or TV, it’s nearly always as killers. Even the word “psychotic” has drifted from its medical definition (a loss of contact with reality) to a catch-all adjective meaning “definitely violent, not to be trusted.” News reports finely pick apart the mental health of school shooters, while never seeming to admit that anyone can have a history of psychosis.

One recent book that bucks the trend is YA author Neal Shusterman’s 2015 novel Challenger Deep. This accurate secondhand (it’s based on his son) narrative follows the journey of Caden, a teenage boy who experiences a bout of psychosis. Caden’s hallucinations are terrifying, and violence does enter into them. But the character never actually becomes violent or dangerous, and both the protagonist and the neurodiverse kids that populate his adolescent psychiatric ward are portrayed as sick, not bad or evil.

Let’s get one thing straight: schizophrenia has absolutely nothing to do with multiple personalities (otherwise known as dissociative identity disorder). It’s not clear how this particular misunderstanding got started, but it couldn’t be more wrong if it tried. Yet I’ve seen books published within the last ten years that conflate the two disorders, suggesting that not even a cursory Google search was done.

Even when writers do avoid the multiple personality trap, they tend to overdramatize the symptoms. In a way, this makes sense, especially in visual media: a character who only hears distant “mumblings” or whose struggles only happen in their head doesn’t make for good cinema. In the otherwise fairly accurate film A Beautiful Mind, John Nash sees hallucinations of people who don’t exist, but who nevertheless present as fully 3-D individuals. These phantasms are as real as his wife or colleagues, and he believes in their existence for years. In actuality, most visual hallucinations are vague and short-lived, such as having the sense that someone is behind you or seeing unexplained static in your visual field. Much more common are auditory hallucinations (voices) or delusions; for instance, feeling with every fiber of your being that you’ve killed hundreds of people, as Elyn Saks recounted in her memoir The Center Cannot Hold. (This book, by the way, is absolutely fundamental reading for anyone interested in writing a character with schizophrenia or simply knowing more about the disorder.)

A recent fictional character that accurately depicts a character with schizophrenia is Lolly Whitehill in the Netflix series Orange Is the New Black. While she’s a prisoner, Lolly isn’t violent (unless you count that one time she helped out a friend in need), and her persecutory delusions are shown as ever-changing, molding themselves around the architecture of Litchfield. Her voices, which viewers can hear, don’t deliver soliloquies but instead are short and to the point–and mean. And yet she’s one of the most sympathetic characters in the series, turning the idea of a psychotic prisoner from a monster into a well-rounded character with a tragic backstory.

Myth #3: Nobody with schizophrenia leads a “normal life.”

So you’ve decided not to write your character with schizophrenia as a deranged killer with multiple personalities. That’s great! But chances are probably high that they either live at their parents’ house, a group home, or a mental hospital. They won’t be married or own a house or have kids. These aren’t things you have to have to be “normal” (whatever that is), but they are things distinctly lacking from nearly every fictional portrayal of schizophrenia I ran across. This was utterly at odds with the first-hand memoirs I read, where experiences of psychosis were described as horrible and harrowing, but also survivable with treatment.

A rare counter-example is the protagonist of Philip K. Dick’s 1964 novel Martian Time-Slip, which features as one of its protagonists an “ex-schizophrenic” (the book’s words, not mine) repairman. Despite occasionally lapsing into psychosis, he is great at his job, has a family, and lives in the Martian equivalent of a 1950s suburb. For a book otherwise riddled with medical errors and not a small amount of sexism, it’s surprisingly neurodiversity-positive.

(Note: The main character of my book, Em Kalberg, does live at her mom’s house. But she’s also a 19-year-old millennial. Give her a few years.)

Myth #4: The worst parts of schizophrenia are the hallucinations and delusions.

Schizophrenia typically has two sets of symptoms: “positive” ones (not to be conflated with “good”) and negative ones. Positive symptoms are the ones most laypeople are likely to know about: voices, hallucinations, bizarre beliefs. Negative symptoms involve things like social withdrawal, cognitive deficits, depression, and lack of motivation. And it is often the negative symptoms that most people with schizophrenia call the most disabling aspect of the disorder. (It should also be noted that negative symptoms don’t typically respond to medication.)

In Stay Crazy, I wanted to make sure that both positive and negative symptoms were represented. Em spends great chunks of time in her room alone. She doesn’t have a lot of friends. She’s frustrated in what she sees as a decrease in her intelligence. She responds to all of this by embracing a sort of “slacker” identity, but deep down, knows it’s kind of a sham.

Negative symptoms are hard to illustrate with words, because almost by definition they are going to be boring to read about. But they are absolutely part of living with schizophrenia, and get almost no notice in any fictional treatment, even in books and movies that get the positive symptoms right. As with every other one of these myths, research is necessary to understand the full range of psychosis, whether you’re writing a novel or just want to better empathize.

The media hasn’t been kind to people with schizophrenia. But by learning more about psychosis and not falling into stereotypes, that seems bound to change, just as fictional portrayals of people with other mental illnesses or differences has slowly changed. So here’s to fewer axe-wielding murderers with multiple personalities, with hopes that this much-needed shift takes off.

Erica L. Satifka is a writer and/or friendly artificial construct, forged in a heady mix of iced coffee and sarcasm. She enjoys rainy days, questioning reality, ignoring her to-do list, and adding to her collection of tattoos. Her short fiction has appeared in Clarkesworld, Shimmer, Lightspeed, and Intergalactic Medicine Show, and her debut novel Stay Crazy is out now from Apex Publications. Originally from Pittsburgh, she now lives in Portland, Oregon with her spouse Rob and an indeterminate number of cats. Follow her on Twitter @ericasatifka.