Disappointment At Tevatron: No New Particle 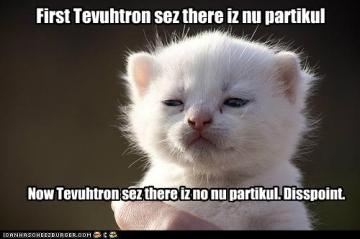 Scientists have been buzzing about the potential discovery of a new particle at Chicago’s Fermilab Tevatron Collider since April when data that could have been evidence for a new particle was announced by the CDF group. On first estimate, CDF concluded that there was a one in ten thousand chance of the evidence being a statistical fluke, but as the strength of the signal grew upon further analysis, those odds were revised to be one in a million.

It turns out that the “new particle” data is actually one in a million. Following analysis of the evidence by Fermilab’s second detector DZero, the researchers have concluded that there is no new particle. The DZero analysis, combined with the lack of any indication that a particle of the right mass has been detected by CERN’s Large Hardon Collider, suggests that the initial evidence may be unique to the CDF detector rather than an actual new particle.

The Standard Model of particle physics says that the world is made up sixteen types of particles, which fall into two classes: fermions and bosons. There are four types of interactions between these particles, including electromagnetic, strong, weak, and gravitational. The different types of particles embody different reactions. The Standard Model can typically be used to explain the creation of other particles through collisions like the one analyzed by the CDF group.

The April announcement that a potential new particle had been detected came as a result of analysis of a particle collision that created a W boson and two quarks. The W boson carries the weak force, and is responsible for radioactive decay. Quarks are a type of fermion particle, that are stuck together by the strong force to make protons and neutrons.

The Standard Model was applied and subtracted from the background of the particle collision, and extensive modeling of the particles’ interactions with the detector were performed. After this analysis was completed, the CDF group had an unexplained bump in their data set at a mass of approximately 145GeV (gigaelectronvolts,) which doesn’t correspond to any known particle, or the highly theorized about Higgs Boson.

The DZero detector is physically different from the CDF, so to verify the results the whole process of subtracting and modeling had to be repeated. The DZero data does not show the same unexplained bump as the CDF data. There is nothing to suggest the presence of anything that can’t be explained by applying the Standard Model in the DZero data.

Fermilab intends to create a task force (composed of members of both the DZero and CDF teams) to try to figure out why the two data sets appeared differently. However, Fermilab is shutting down in September when federal funding for the national laboratory lapses.

(via Ars Technica and The Guardian Image via Icanhazcheezburger)