The Reddit community has been in a furor today over a decision by its corporate parent, Condé Nast, not to allow advertisements supporting Proposition 19, or the “Regulate, Control and Tax Cannabis Act of 2010,” which proposes to legalize many forms of marijuana use in the state. When Firedoglake, which was planning to advertise a pro-Prop 19 ad on the site, got in touch with Condé, they were told that “As a corporation, Conde Nast does not want to benefit financially from this particular issue.” Their decision follows Facebook’s ban on similar ads.

The difference between Reddit and Facebook, however, became apparent when the community took action, led by the site’s moderators:

First, the admins posted the following message to the community in response to the decision by their corporate parent:

The reddit admins were just blindsided with the news that, apparently, we’re not allowed to take advertising money from sites that support California’s Prop 19 (like this one, for example). There’s a lot of rabble flying around, and we wanted to make some points:

This was a decision made at the highest levels of Conde Nast.

reddit itself strongly disagrees with it, and frankly thinks it’s ridiculous that we’re turning away advertising money.

We’re trying to convince Corporate that they’re making the wrong decision here, and we encourage the community to create a petition, so that your anger is organized in a way that will produce results.

We’re trying to get an official response from Corporate that we can post here.

Please bear with us.

Then, they announced that since Condé Nast had said that the site couldn’t “benefit financially” from the ads, they would run them for free. (Example) Oh, and along the way, the community massively upvoted many of the anti-Condé, pro-Prop 19 postings, such that the front page of the pictures subreddit, /r/pics, looked like this this afternoon: 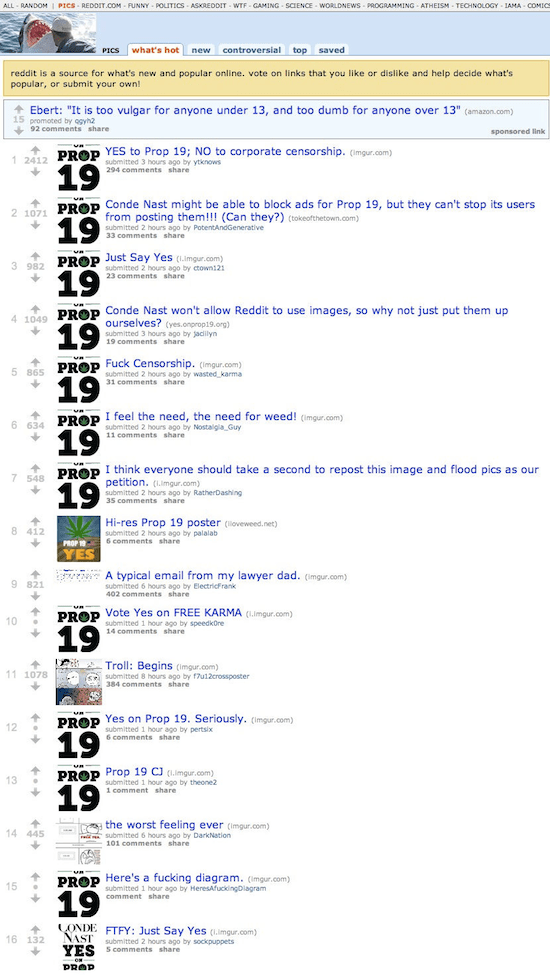 The whole brouhaha has served first, to bring tons more attention to an issue that Condé Nast had hoped to sweep under the carpet; second, to plaster the site with pro-Prop 19 ads anyway — for free!; and third, to highlight how much money the occasionally cash-strapped site could have potentially made by selling ad space to groups that support Proposition 19, given the relevance to the community.

Condé may be fearful — and not wholly without justification — that this episode will scare big corporate advertisers away from Reddit, thinking its community to be a bunch of ornery, bacon-hungry potheads; in truth, while in truth there are some marijuana-centric subreddits (FDL mentions trees, marijuana, weed, cannabis, and prop19), these comprise a pretty small portion of the site’s overall readership, whereas issues concerning free speech and corporate influence tend to rouse a much larger percentage of the beehive.

Contrasting Reddit’s popular, admin-backed Prop 19 uprising with Digg’s recent redesign, which pissed off many long-time Diggers on the road towards sellable social media slickness, it’s clear that Reddit is an animal with an unpredictable, anarchic sociality unlike Digg and Facebook — and while this may be precisely what its users love about it, it’s enough to give the multibillion dollar publishing company that owns it a headache.