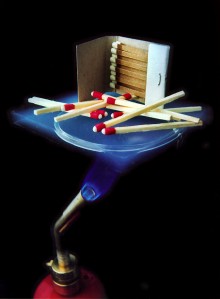 The ultra-light materials called aerogels are the lowest density materials that modern science can create. Their amazing insubstantiality gives them incredible properties as insulators, capable of diffusing extreme heat and blocking out sound and electrical signals. But researchers have taken these materials one step further by creating an aerogel from nanodiamonds.

Researchers began by creating a carbon aerogel and then placing it in a “diamond anvil” and heating it with lasers to form diamonds, all while trying to keep the forming aerogel from collapsing under the pressure. From Chemistry World:

The team made the structure using a diamond anvil cell to squeeze an amorphous carbon aerogel between two diamond surfaces, at pressures of more than 20GPa. They drove the transition forward by laser-heating the cell, resulting in temperatures above 1200K. […]The challenge was making sure the delicate aerogel didn’t collapse. To overcome this, the team filled the pores of the aerogel with supercritical neon gas. At pressures greater than 5GPa the neon changed into a solid, supporting the aerogel’s structure.

The marriage between one of the strongest materials on earth with the low-density aerogels could open up all sorts of possibilities. Moldable, flexible, and transparent, the diamond gels could be used to make ultra strong glass. It could also be used in medical applications, nanocomputing, and possibly space-craft construction. Of course, those pie-in-the-sky plans are far in the offing. First, researchers need to determine the lowest possible temperature to change the carbon to diamond, which will hopefully be within the means of existing methods of fabrication. Then they need to find a way to make more of their new material, as they can only muster about a hair’s length with the current strategy. Hopefully where the science exists, there will be an industry to support it.

(i09, Chemistry World, image via Wikipedia)