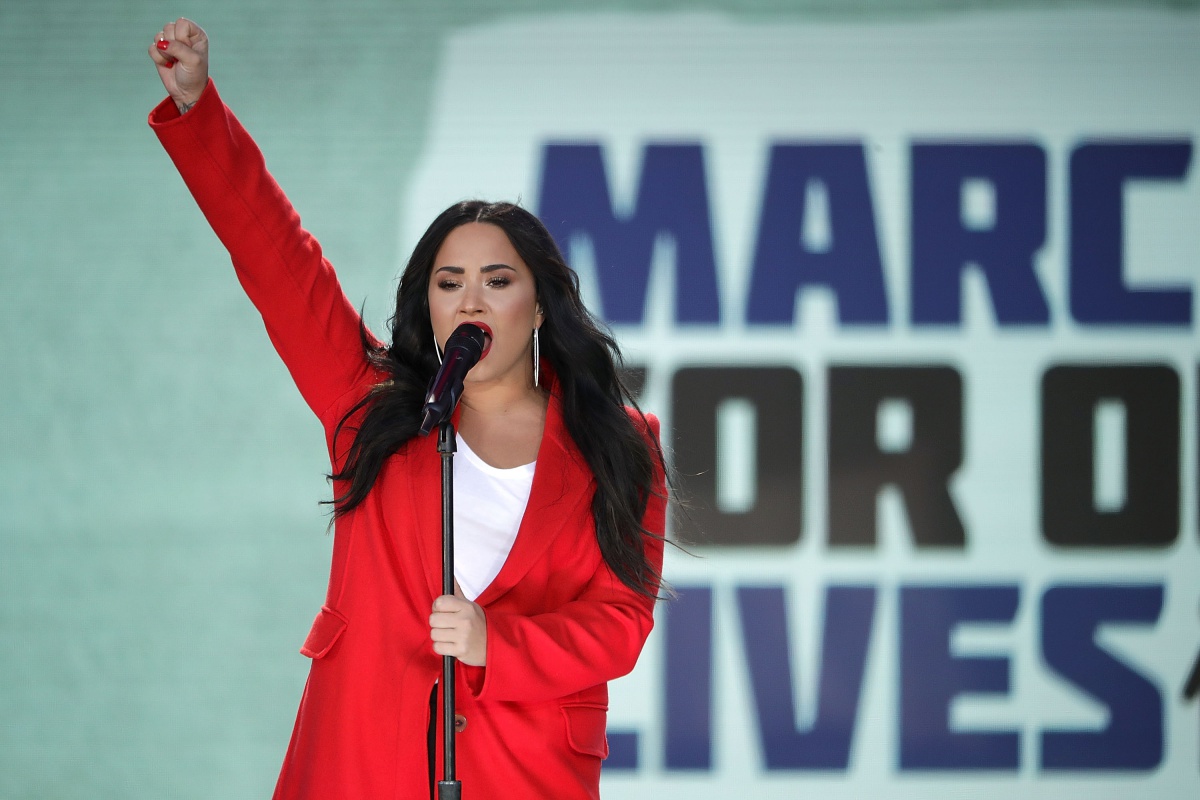 Yesterday, actress, activist, and singer Demi Lovato was hospitalized in what has been reported as a heroin overdose, although there is some back and forth about that. As of right now, Lovato is reported to be stable and with her family in the aftermath of this terrifying event.

Lovato’s history of addiction is something the artist has been very outspoken about, yet so many people were shocked that it was heroin and that “she seemed so well before.” The language we use around addiction is already problematic, but when it comes to women in the public eye, especially ones with a history of mental illness (Lovato is bipolar), we tend to feed off their pain when it fuels their art, while simultaneously not truly believing them when they say they are hurting.

Lovato’s hospitalization made me think of Amy Winehouse and, as a result, the book Trainwreck, by Sandy Doyle. The book goes through several women throughout history who have been in the public eye, with a focus on Britney Spears, and discussing how media loves to tear down women who express their pain through their art, while simultaneously shitting on them for the negative side effects of that pain.

The chapter about Death covers the deaths of Amy Winehouse and Princess Diana. Both women have been deified after death, but during their lifetimes, both were torn down by the media. Doyle points out that in 2008, Winehouse was named one of the “Villains of the Year,” was the butt of several jokes about how she was probably going to die young, and that reporters mentioned that her achievements were overshadowed by her “tumultuous personal life.”

With Princess Diana, mourners came out in a massive funeral that had 3 million people in attendance and 2.5 billion people watching on TV, calling her an angel. Elton John re-wrote “Candle in the Wind” for her. Yet, when she was alive, she was called crazy, bulimic, self-harming, and “addicted to media attention.” As Doyle aptly put it, “Alive, she was a madwoman and a blight on the British Crown. Dead, she was Ophelia, lost and lovely, garlanded and mourned as she passed downstream.”

This obsession about death and redemption is what came to my mind when this news about Demi Lovato broke. Most of all this section from the book:

“This is where it’s all headed. What the whole trainwreck industry is pushing for: The one form of permanent redemption that the culture freely allows to a woman who is mad, bad, and dangerous to know. After all the flame-outs, the breakdowns, jokes, the failures, the surveillance, the invasions, the dehumanization—after all the years of hating these women, and punishing them—the one happy ending that we as a culture will accept is the moment where it all falls in on her. And we all get to gather around the coffin, and sigh, and say that it’s a shame.

“We love our dead girls. We love them pretty, and we love them young […] probably back to the first woman who ever picked up a drink she couldn’t put down.”

Lovato is alive, thank goodness, but will people finally take notice of her pain instead of assuming she’s doing things for attention? Instead of acting as though she is trying to commodify her illness, rather than bringing light to a stigma that has plagued her throughout her life?

When “Sober” came out, a song Lovato wrote about relapsing after being six years sober, I doubt many people paid attention to what it was saying in retrospect, with people close to her reporting that she has severed ties with her life coach and those who helped her get sober in the first place. It’s also very hard to understand, for someone without the illness of addiction, how it can be difficult to get clean and stay clean in your ’20s.

So much of youth culture revolves around drinking and hanging out at bars. If you live in places in Brooklyn, like Bushwick, it’s literally one giant bar scene. It’s how most people meet, and when you become sober, you have to restructure the way you meet people and how you socialize, surrounding yourself with people who encourage your best.

In an interview with People, a source said, “The disease Demi has is a vicious liar, and it’s been telling her for some time that she can use just a little, just one or two drinks, nothing too serious, nothing bad will happen, she can keep it under control. And when she could, for a few months, it seemed like vindication to her, proof that she could keep it under control.”

We need to change the way we talk about addiction. We need to listen and help people when they say they are struggling, and we need to recognize that women are not lying about their mental health for attention. They know full well that the worst thing a person can be called is crazy—the stigma that comes when you accept your diagnosis and try to move forward. It took me years to properly address my own anxiety because I was afraid of being called crazy more than I was afraid of hurting myself.

Demi Lovato’s relapse should be an opportunity for us all to learn more and be more conscious of how addiction affects the people around us.