Catch the Peak of the Delta Aquarid Meteor Shower Tonight 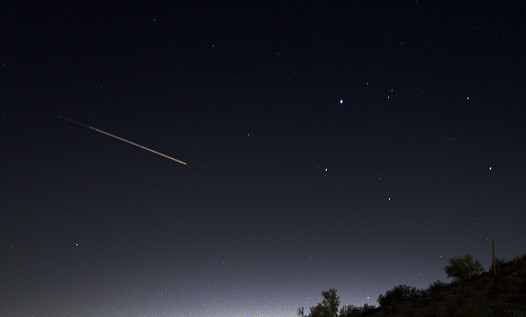 Since you’re probably going to be outside trying to catch Pokémon anyway, why not also take in some of the sights that aren’t marked on your map as Poké Ball restocking points? If you look up—preferably somewhere with little light pollution—you’ll probably be able to see the peak of the Delta Aquarid meteor shower.

The Delta Aquarids—made up of debris from the breakup of what are now the comets Marsden and Kracht Sungrazing—put on a better show for the southern hemisphere, so lucky you if you’re reading this from afar, but those of us up in the north will still get a decent view. The shower has been going on since about July 12, and I already saw a few last weekend just out of coincidence, so with the peak approaching tonight, there’s a good chance you can, too.

Prime viewing time is between midnight and sunrise, with the best part around 2-3AM (and you might just see some anytime after it gets dark). If you’ve got a good viewing location light-wise, you could see up to 20 meteors per hour—about one every three minutes, for the math-averse. That’s not bad, but it’s just a pre-game next to the Perseids, which will peak a bit into next month on August 11-12. Don’t worry if you can’t get out on the exact dates, since you should be able to see a decent amount for a few days before and after.

Meteor showers are named for the place they seem to emanate from, with the Delta Aquarids streaking away from the star Delta Aquarii in the constellation Aquarius. However, you don’t have to stare directly at it, as the meteors will pass across a large portion of the sky, so just point yourself vaguely south and look up. (The Perseids will appear to come from Perseus in the north.)