Laughter is the second-best medicine. 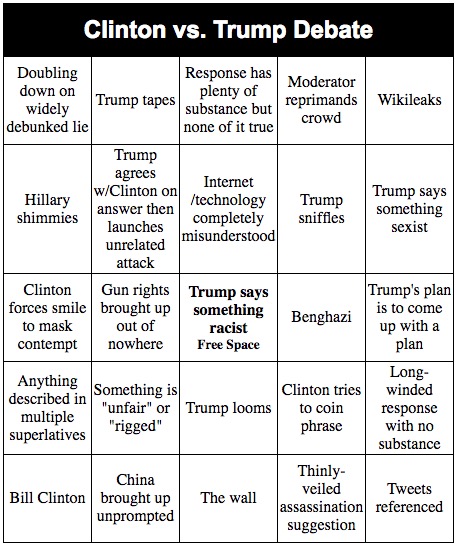 [Update 10/19/2016:] Third time’s the … well, last time, thankfully. We’ve got one more update for our debate bingo card! This version features additions of “Wikileaks,” “Trump sniffles” (which we honestly didn’t think would come back after the first debate), “Clinton smiles to mask contempt,” and more. (Click here for randomized card.)

[Update 10/9/2016:] We’ve updated our card a bit since the first debate to prep for tonight’s second round, with new boxes like “Hillary shimmies,” “Bill Clinton,” and “Trump non-apologizes/claims he’s already apologized.” It’s going to be a weird night. Enjoy! (Click here for randomized card.)

[Original post:] Turning tonight’s Hillary Clinton vs. Donald Trump presidential debate into a drinking game would just be dangerous and irresponsible, so how about a nice game of bingo?

Don’t worry! We’ve got everything you need. It wouldn’t be fun for everyone to play with the same card, though, so go ahead and click this link to get your own version of our Very Official and Serious Debate Bingo Card with the boxes all scrambled around. If you’re feeling particularly creative and/or snarky, you can go ahead and use that same link to replace some of our squares with your own (like “Candidate references their own genital size”), too. Feel free to share links to your custom versions in the comments below! We all need each other right now.

If you’re looking for a place to play along together, we’ve already got the livestream of the debate all set up. The main event kicks off at 9PM ET (6PM PT), when we’ll all find out which candidate cracks first under the pressure of pretending not to hate each other and the diametrically opposed ideas they represent.