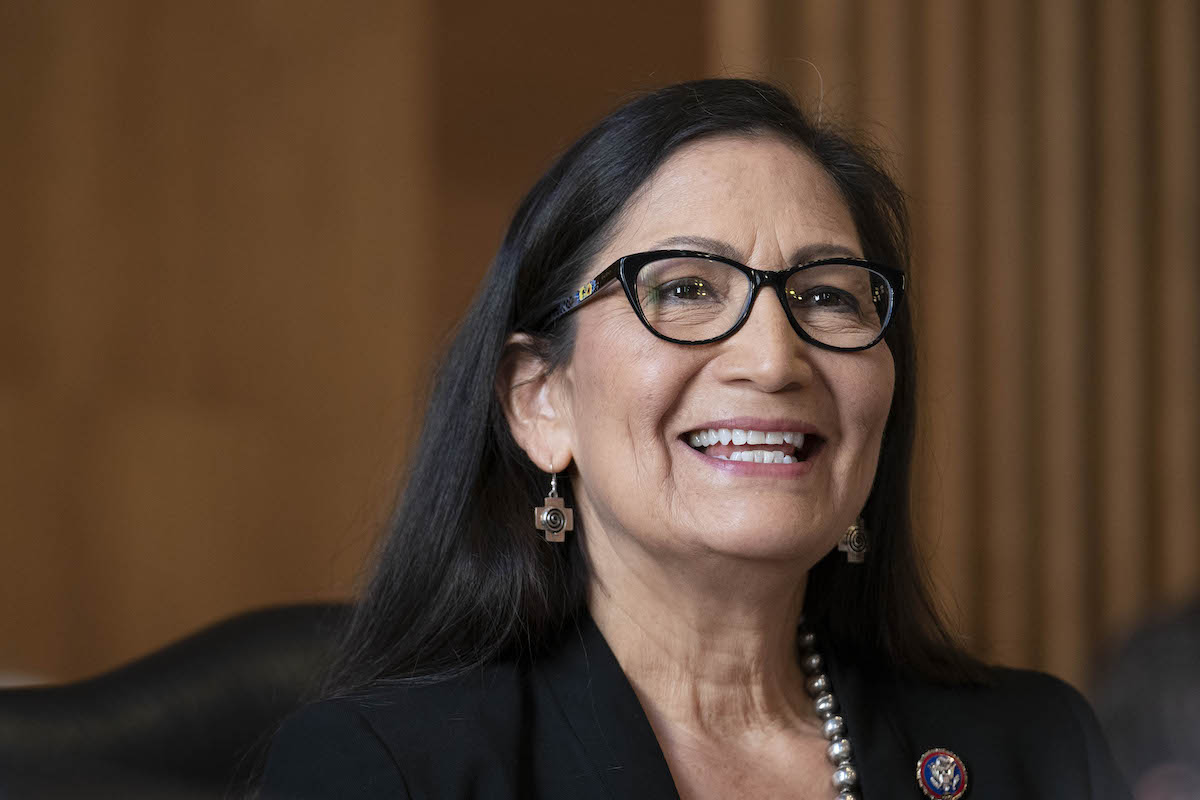 In a 51-40 vote, the Senate has confirmed Deb Haaland as the new Secretary of the Interior, making her the first Native American to hold the position–or any cabinet position, ever. When Haaland, a member of the Laguna Pueblo Nation in New Mexico, was elected to the House of Representatives in 2018, she was one of the first two Native American women to be elected to Congress, along with Kansas’s Sharice Davids who was elected the same year.

Haaland faced an uphill battle in the confirmation process. In the end, only four Republicans voted for her confirmation. Democrat (barely) Joe Manchin had threatened to derail her confirmation, saying that even after he met with Haaland via Zoom, he was still “undecided” and had “remaining questions” about her qualifications.

Joe Manchin voted for Brett Kavanaugh and Jeff Sessions, but is a No on Neera Tanden and “undecided” on Deb Haaland? 🤔🤔🤔 https://t.co/7VxhclO08D

Jeff Sessions was so openly racist that even Reagan couldn’t appoint him.

Yet the 1st Native woman to be Cabinet Sec is where Manchin finds unease? https://t.co/wyki5iE36Y

Trump nominated cartoon villains to be Secretary of Interior and Manchin voted for both of them, but now he’s got all sorts of questions and concerns. 🤔 pic.twitter.com/Phylyo95cF

Fortunately, Haaland was confirmed. The importance of her role as the first Native American to hold the position is massive. The relationship between the Interior Department (and the federal government as a whole) and Indigenous people has, historically, been a terrible one. The Interior Department has been used as a cudgel to oppress Native tribes for centuries. In making sure the department works to serve all Americans, including the 574 federally recognized Native American and Alaska Native communities that have historically been so overlooked and tyrannized, the impact of her appointment cannot be overstated.

“Rep. Haaland will have an important task ahead of her. She must refocus the Interior Department on preserving and protecting almost 500 million acres of public lands, combating climate change and environmental degradation, and upholding the federal government’s obligation to tribal nations,” Senate Majority Leader Chuck Schumer said ahead of Haaland’s confirmation vote.

“The Trump administration did more to undermine the relationship between the federal government and the sovereign tribes than many have in decades,” he continued, “from desecrating sacred burial sites to building a border wall to neglecting the desperate situation of Native tribes during the pandemic. Shame on them.

“In elevating Rep. Haaland to lead the Department of Interior, we reset the relationship between the federal government and tribal nations to one of cooperation, mutual respect and trust.”

Under Trump, the Interior Secretary was an oil & gas lobbyist. Now, it’s Deb Haaland. Things are looking up.

“It’s not just Deb being there … This is about having someone who has this moment where she can actually reset the relationship between the United States and Tribal Nations. A woman who believes in making our lands work and preserving them.”https://t.co/zD1GtGKACJ

“We are the First People and we should have a role in how this country is governed.”

Deb Haaland is the first Indigenous American cabinet secretary in the history of the US 👇 pic.twitter.com/HSio5qNDJq

“I will miss all of you dearly,” Rep. Deb Haaland says, her voice cracking with emotion as she concludes her farewell address to the House of Representatives by thanking her staff, the workers on the chamber floor and her constituents. #DebForInterior pic.twitter.com/OEP34XvXl6