Deadwater Fell Is Your Next British Crime Obsession | The Mary Sue

Deadwater Fell Is Your Next British Crime Obsession

We love a dark and broody David Tennant. 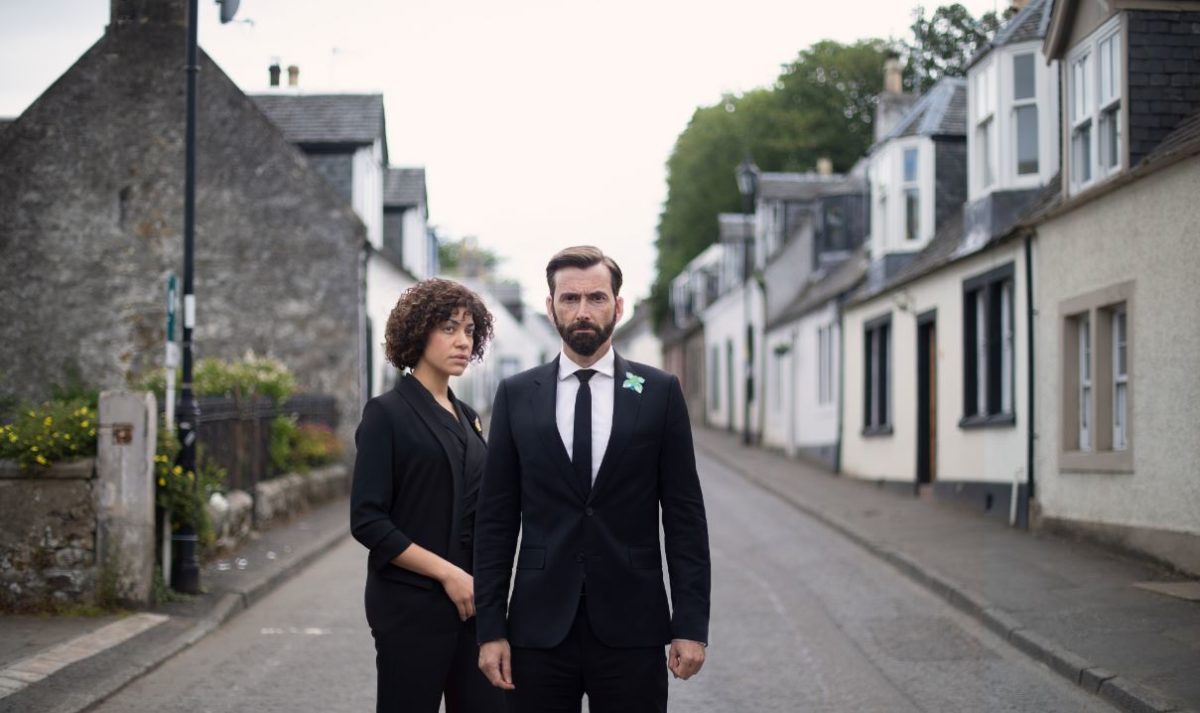 The British do so many things well: cucumber sandwiches, fancy hats, sketch comedy. But perhaps their strongest export to date is their seemingly inexhaustible supply of murder mystery dramas. From Broadchurch to Grantchester to Sherlock to Luther, the Brits have a knack for gripping whodunits jam-packed with excellent actors and dreary scenery.

The latest addition to the moody canon is Deadwater Fell, a four part series starring David Tennant (Good Omens, Doctor Who) and Cush Jumbo (Vera, The Good Fight) about a small fictional village in Scotland that is shattered by tragedy.

Jumbo plays school teacher Jess Milner, who lives with her police sergeant boyfriend Steve (The Terror‘s Matthew McNulty) and his two sons. She is best friends with her fellow teacher and neighbor Kate (The Crown‘s Anna Madeley), who has three beautiful daughters with her husband, town doctor Tom Kendrick (Tennant).

When the Kendrick’s home catches fire, Kate and her girls die and Tom is hospitalized. Initially assumed to be a horrible accident, police soon discover injection marks on all the bodies. Did someone try to murder the family? Are Kate and Tom responsible for the murders, or is it someone else in the quiet town of Kirkdarroch?

Deadwater Fell was created and written by Daisy Coulam (Grantchester, Humans) and directed by Lynsey Miller (The Boy with the Topknot, Eve). And while it hits many of the familiar beats of the murdery mystery genre, the women behind the series have smartly shifted focus from the police and the investigation to the domestic relationships and the interpersonal fallout within the community.

Deadwater Fell works not just as a mystery, but as an examination of motherhood and gender roles. Many in the village are quick to villainize Kate, pointing to her post-partum depression and subsequent medication as a sign of instability. Meanwhile, Jess struggles to get pregnant via IVF and carries guilt following a deep betrayal.

As secrets are uncovered, we learn that life in the idyllic Scottish village harbors betrayal, drug use, depression, infidelity, alcoholism, and a host of other sins. This show doesn’t reinvent the wheel, but it delivers solid twists and turns that are anchored by strong performances.

Tennant excels as the bereaved Tom, easily shifting from kind to threatening to defeated. But the heart of the series is embodied by Cush Jumbo, who delivers an effortlessly nuanced and deeply felt performance.

Deadwater Fell premiered in January on Channel 4, but American viewers will be able to watch the series on Acorn TV, which is currently offering a 30 day free trial with the code FREE30. Acorn TV also hosts dozens of addictive British dramas and films, including the Miss Fisher movie Miss Fisher and the Crypt of Tears.

What are your favorite British mystery series? Share yours in the comments!