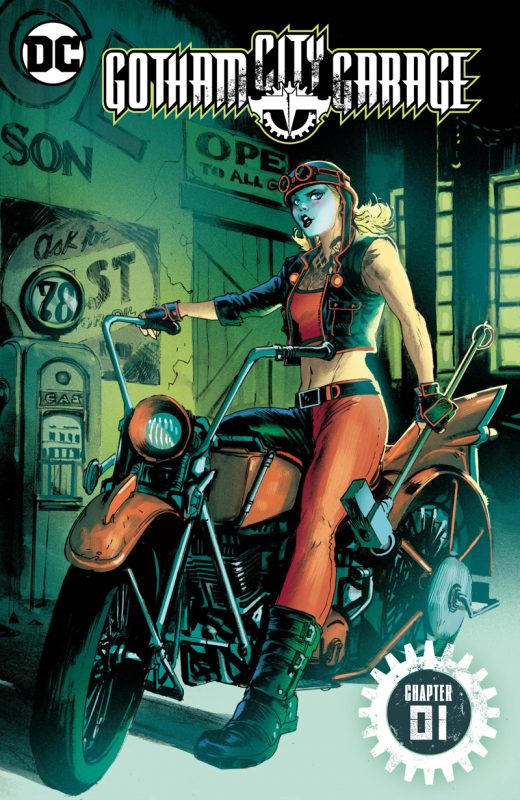 As in other areas of pop culture, comics are beginning to deal with certain political realities and fears these days thanks to a global wave of “alt-Right” thinking. With its upcoming title, Gotham City Garage, DC Comics is putting the power to fight back in the hands of its heroines…as they ride motorcycles.

According to The Hollywood Reporter, Gotham City Garage “takes place in an alternate version of the DC Universe where the female heroes take center stage as part of a resistance effort against the fascist political rule of Lex Luthor. The “Garage” of the series title refers to the fact that, in this version of reality, the good guys are all bikers.” The fascist society is known as “the Garden,” whereas the “freescape” is where all the rebels on bikes live.

Much like DC Comics Bombshells, Gotham City Garage was inspired by a series of DC Collectibles statues. Co-writer Collin Kelly explains, “DC provided us with the statues, obviously, and they told us, ‘We want a kind of a Blade Runner meets Mad Max kind of a vibe, but what can you do with that?'”

“But, when it comes to motorcycle fiction, you have to look at it as, essentially, rebel fiction,” Kelly continues. “It’s part of outlaw culture — they’re not bad guys, they’re not criminals, but there’s a sense of saying eff you to the main societal structures and cutting out for the open road. Going back to Easy Rider, that’s what motorcycle culture is, that’s motorcycle culture to a T, and that’s the rebel fiction that we brought to it. That’s what DC fell in love with in our take.”

You know what I wish DC would fall in love with? Hiring women. I’m sure Collin Kelly and his co-writer, Jackson Lanzing, are gonna do a great job. But it’s ironic that, when it comes to this story about women riding motorcycles and being primarily responsible for “sticking it to the man,” it’s being led by two men.

Wanna really shake things up DC? Next time you have a female-centric title, maybe get some women to create it. Just a thought.

In any case, Gotham City Garage launches digitally Aug. 16, with a print edition released Oct. 11. Wanna read the first issue? Head on over to The Hollywood Reporter for a preview of Chapter 1.