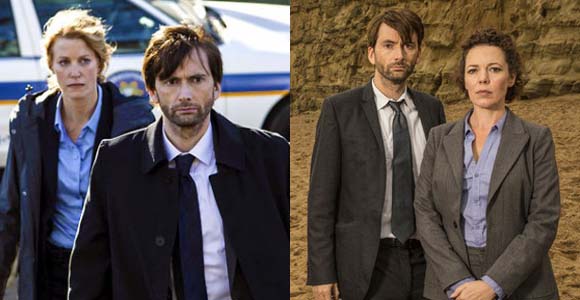 David Tennant is finally talking about his upcoming Fox television series, Gracepoint. You know, the remake of the UK’s Broadchurch where he’s playing the exact same character?

For those who haven’t seen Broadchurch, it’s a compelling and dramatic crime story set in a small coastal town. The story follows the hunt for the killer of a young boy and the surprisingly numerous suspects in the community. Tennant and Olivia Colman both produced wonderful performances but it’s Breaking Bad’s Anna Gunn who will join the Doctor Who star this time around.

Tennant told Entertainment Weekly it’s been “lovely” working with Gunn so far. “We’ve only done two days on set so we’re still at the beginning of our working relationship. But she’s very sparky and a fine actress and fun so far, which is a relief. We’re spending quite a bit of time together over the next few week,” he said. “She can take work very seriously but can also have a laugh which I think is important when working on something so intense.”

As for playing the same role, the actor said it’s been a “peculiar experience.” But as for why he said yes? “The fact I knew how good it was,” he told EW. “I knew what an exciting story it was and a lot of the same people are involved so I knew it wasn’t going to be turned into something … less good.”

Ok, that last bit I definitely heard in the Doctors voice. Moving on. If you’re a Broadchurch fan but wondering if Gracepoint is worth watching, Tennant also gave a few hints about changes.

In terms of the ending, I’m just as in the dark as everybody else. I’m following the rumors in the press. Which is the same as the experience as filming Broadchurch. I’m told there will be a change, whether that’s a fundamental change or a tweak I have no idea. Certainly the pilot episode sticks very closely to the original as the story goes on it eases out a bit, there’s extra twists and turns, some characters are more developed. I think the story will go in directions that fans wouldn’t necessarily recognize.

The actor also said he’s still waiting to hear if he’ll be back for Season 2 of Broadchurch before worrying about Gracepoint going further than a “limited series.” You can see above, Tennant’s look in both the UK and US versions are very similar. EW asked him why: