This Cosplay Perfectly Commemorates DashCon (Yes, THAT DashCon) for Its 7-Year Anniversary

What a time to be alive. 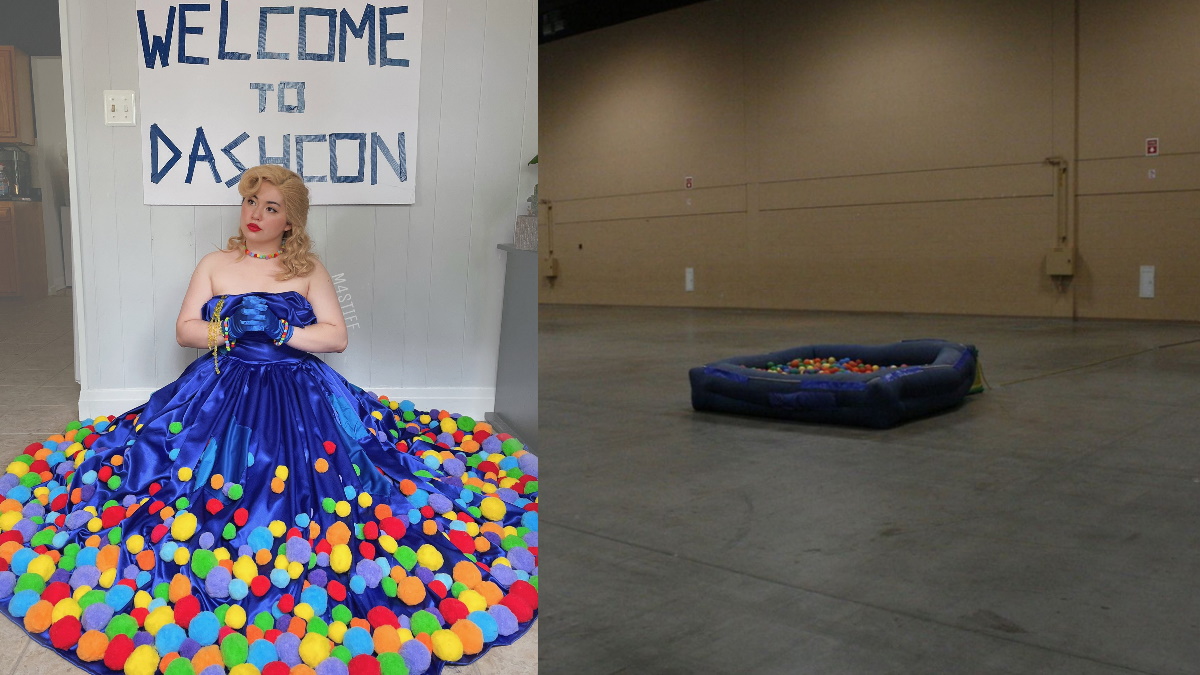 Sometimes, you see a tweet that makes you feel old, like this one from cosplayer @m4stiff that honors the, wait for it, SEVEN year anniversary of DashCon.

One of my absolute favorite things about cosplay is how creative the community gets. We don’t just replicate characters down to their Super Saiyan baby hair, we put our own spin on persons, places, and things. In this case, the thing is an event, and that event lives on in infamy as one of the most disorganized weekends in convention history.

@m4stiff spared no detail with their cosplay, creating a look that imitates the blue of the infamous ball pit and posing in a way that spreads the multi-colored balls out to capture the essence of the pit itself. Even the expression on their face reads, “I have no idea what’s going on.”

if you understand this detail you qualify for a veterans discount pic.twitter.com/QBlpSd0xaX

What is that, you ask? Well…

I’m not sure if @m4stiff actually attended the con themselves, but I do know that the weekend of June 11 – 13, 2014 was a wild time whether you were at the event or hearing about it online. As someone who used to frequent conventions quite often, DashCon quickly became a barometer of how well any convention experience was going. “DashCon was better,” became code for, “This event I’m at is an absolute dumpster fire,” and, arguably, it’s still referenced in such a way today.

In case you need a refresher of what the heck DashCon was, or at the very least, a breakdown on HOW bad it got beyond the ball pit, this article from The Verge lays everything out. Highlights include:

I have zero experience in organizing a convention so I can’t speak on the hotel bill thing (though the article does have a quote from the hotel’s general manager in response to an alleged letter), but as someone who has been invited as a guest, having someone show up to the hotel to find out that they 1) aren’t going to get paid, and 2) have to pay for the hotel room they were promised is REAL bad.

At the time, people couldn’t figure out if DashCon was an elaborate scam that the organizers would’ve gotten away with if not for those pesky kids, or if the organizers were pesky kids themselves who had good intentions, but didn’t realize how much effort went into putting on an entire convention.

Honestly, as I look back at DashCon, an event that would be cited when discussing other disasters like Fyre Festival and Universal FanCon, I truly feel like it was just some folks from Tumblr who didn’t realize what they were getting themselves into. I say they’re from Tumblr because that’s where the whole thing originated and was, at one time, called Tumbl-Con with the purpose of bringing the Tumblr community together. Of course, they had to change the name to show no actual affiliation with Tumblr, but the idea always remained of being an event to bring a particular online community together.

These days, DashCon is remembered… almost fondly? The response to @m4stiff’s cosplay has been overwhelmingly positive, but it’s also got people reminiscing about DashCon in a sort of quaint way because, yeah, that really did happen, didn’t it? It was a whole ass mess, but you can’t help but laugh when you see a ball pit come across your timeline.