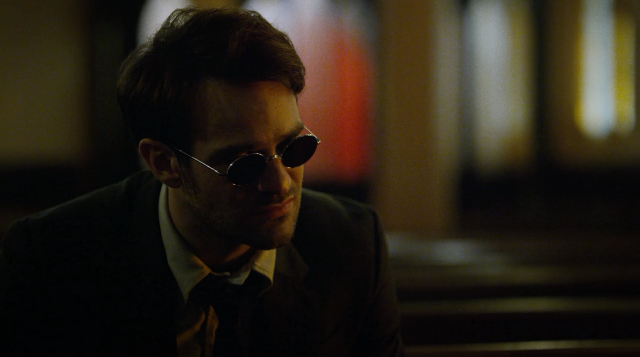 Angsty superheroes. A few weeks ago, I’d have sworn we were sick of them, fed up with dark souls driven to vigilantism and desperate for quippy humor and the color yellow. Then, on April 10, season 1 of Daredevil was released on Netflix and just about everyone—myself included—went wild for it. Yet, a mere eight days later, Zack Snyder released the teaser trailer for Batman v Superman: Dawn of Justice and the reaction has been, while enthusiastic, laced with a heavy dose of, “Ugh, more brooding?” This begs the question, what did Daredevil do right and what is Batman v Superman doing (or rather predicted to do) wrong? In other words, when is angst compelling in a superhero story and when is it grating?

Setting aside the fact that audience appeal is always somewhat arbitrary, the issue isn’t the amount or intensity of angst in a movie or TV show but how it is used: where it comes from and what purpose it serves. To put it simply, angst must be the product of conflict, not the cause. This is something that Daredevil understood and Man of Steel (the movie Batman v Superman is most expected to emulate for obvious reasons) didn’t.

For many, Man of Steel was the brooding straw that broke the camel’s back. Yes, The Amazing Spider-Man took some criticism for its somber tone, and sentiments towards The Dark Knight Rises remain… mixed, but it wasn’t until Man of Steel that audiences really seemed to go, “Oh, enough already! Get over yourself!”

The problem with Man of Steel isn’t so much that it features an angsty Superman (though I do agree with Patton Oswalt on this), but that his angst is directionless and lacks a narrative function. Clark Kent spends the first fifteen years of his adult life wandering the world, somberly contemplating his place in it and it’s like, “Why? Clark, you grew up on a farm with loving parents and a dog. Where is this coming from?” I get that his emotional journey in the movie is learning to embrace his powers but that arc does not warrant such incessant mopiness.

In contrast, Matt Murdock’s pathos in Daredevil, as intense as it is, is always rooted in something relevant to the plot and always feels earned. His primary emotional throughline (and source of angst) in the show is his conflict over whether or not to kill. This spawns partly from his legitimate desire to rid Hell’s Kitchen of evil, but also from the enjoyment he derives from hurting people. As a Catholic, he’s tormented by the idea that “Murdock boys … got the devil in them” but reasons that if God “put the devil” in him then he should use it for the greater good, even if doing so imperils his eternal soul.

That … is a problem worth angsting over. More importantly, it’s a problem that actually factors into the plot and pays off in the finale when, (in an inversion of Man of Steel) Matt chooses not to kill Wilson Fisk.

For all his problems, Matt generally refrains from self-pity. To the best of my knowledge, in roughly thirteen hours of entertainment, there is not a single shot of Matt moping on a rooftop. Sure, he spends plenty of time atop buildings, listening for crime and torturing people (as you do), but never contemplating the tragedy of his existence in that purposeless, bowed stance that has come to epitomize the gritty superhero.

If he ever truly mopes, it’s in episode 10, “Nelson v Murdock,” which takes place the day after Nobu and Fisk beat him half to death and Foggy Nelson unmasks him while he’s unconscious. Matt spends the entire episode confined to a couch as Foggy berates him for his years of deception. Potentially boring or exasperating, the fallout between the two is, instead, heartbreaking because both Matt and Foggy’s emotional reactions to the situation are warranted. Admittedly, the ensuing two-episode stalemate between Matt, Foggy and Karen veers into “Oh, get over yourselves” territory, but even then it’s forgivable because their division is grounded in justified hurt.

So that’s angst done well. Will Batman v Superman have a similar handle on its characters’ problems? If the teaser trailer is anything to go by, the answer is no. In the tradition of Man of Steel, unhappiness appears to be everyone’s default emotion. The plot hinges on a specific and, I don’t doubt, earned conflict (ergo the the v in the title) but when the world is already so dark and angry, character interaction can’t expect to impact the tone of the film any more than my tears of aggravation can salt an ocean.

However, for the sake of optimism (because it does feel unfair to rag on a movie that doesn’t come out for another 11 months), I’ll admit that there is some good stuff in the trailer, namely the overlapping commentators voicing concern for the corrupting potential of Superman’s power. That’s an interesting angle that I’d like to see explored. If the trailer’s tone and aesthetic prove misleading and it’s this ethical quandary that is the cause—not the product—of the film’s angst… there may be hope for Batman v Superman after all.

And if not, by then we’ll have season 1 of Daredevil, Jessica Jones, and possibly Iron Fist to console us.