Meet the Sheriff Who Felt the Need to Publicly Defend the Men Accused of Trying to Kidnap Michigan Gov. Gretchen Whitmer 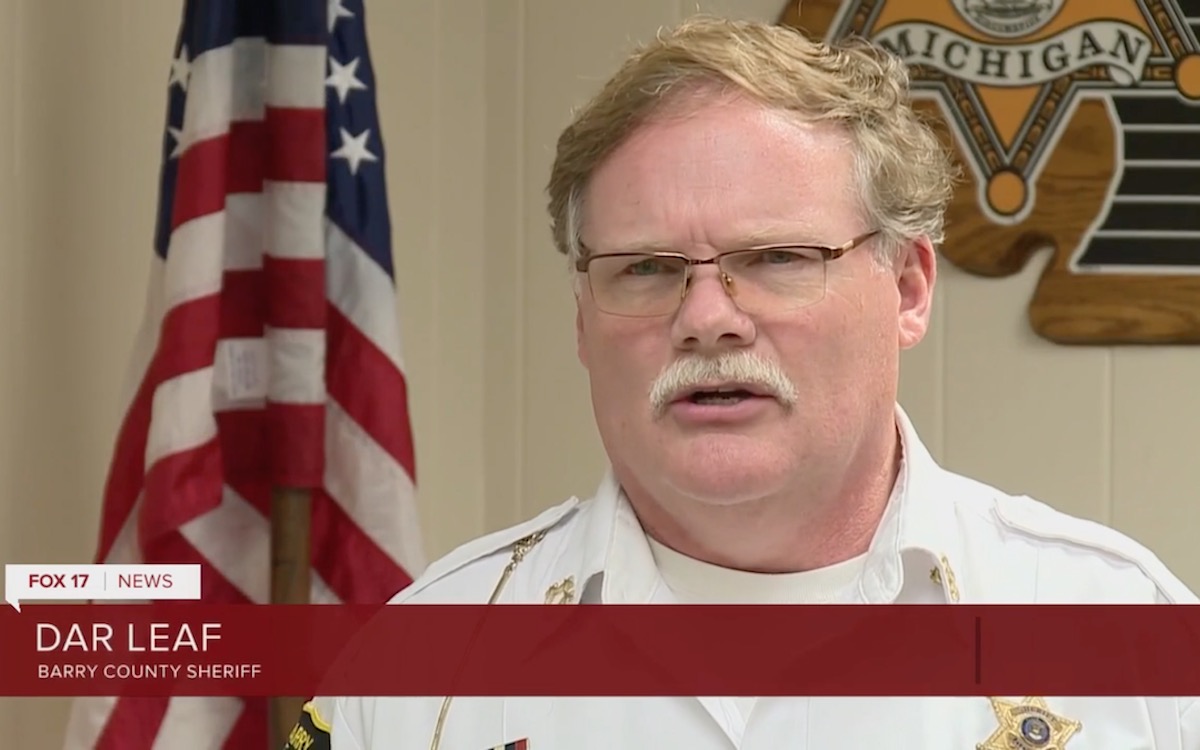 On Thursday, six far-right extremists were arrested and charged with plotting to kidnap Michigan governor Gretchen Whitmer and stage a coup of their state’s government. A lot of rightwing Michiganders have vilified Whitmer for her shelter-in-place and mask mandates in the face of COVID-19. You might remember the “protest” the state saw back in May, when armed demonstrators stormed the capitol building.

Around that same time, one of those men took the stage at an anti-shutdown rally. On stage with him was a West Michigan sheriff named Dar Leaf, who was there as a guest speaker in opposition to Whitmer’s policies.

No doubt the FBI is all over this little cowardly Sheriff

Local news station Fox 17 asked Leaf if he regrets sharing that stage with an alleged attempted kidnapper. Leaf’s answer was NOT GREAT.

A man charged in the plot to kidnap Gov. Whitmer, shared the stage with a West Michigan sheriff at a rally back in May.

We asked the sheriff about it last night on @FOX17

Leaf said he “was shocked” and that he “did not see that coming from those guys,” who he’d told the news outlet he’d seen at other rallies and that they’d always been nice to him.

Leaf went on to defend the alleged terrorists, saying “we can’t convict them in the news media” and that they deserve a fair trial. He says he doesn’t have any regrets about sharing a stage with one of them because as far as he can tell, they might not even have been trying to kidnap the governor–they might have just been trying to make a citizens arrest.

What’s his reasoning for that theory? That, as he puts it, “a lot of people are angry with the governor.” Which I guess makes an unwarranted citizens arrest a totally acceptable thing to do!

So by his own word, if I “thought” that Barry County Sheriff Dar Leaf was guilty of a felony, I could, as a private citizen, just decide to kidnap him? Something tells me that wouldn’t fly. https://t.co/qy6VowIbgI

It’s pretty disturbing that Leaf’s first instinct–without prompting, on the record, in front of a camera!–is to justify the actions of accused terrorists and to supply them with an out, one which Leaf has no reason to suspect was their motive except that he doesn’t want to believe their charges are true–even though he just finished saying how they have to get their due process.

“Innocent until proven guilty” is one thing but seeing a law enforcement authority twisting all possible realities until he finds one that supports his good ol’ boys presuppositions should raise all kinds of concerns, especially since it’s been reported over and over again the terrifying degree to which white supremacists have infiltrated law enforcement agencies across the country.

Article after article for DECADES have said white supremacist terrorist groups have infiltrated the Police. So you watch this & tell me why this sheriff isn’t also being investigated. Also “see something/say something” clearly doesn’t apply here for the neighbors, huh? https://t.co/b4c46NKytG

I sure hope Sheriff Leaf is on the FBI’s radar now if he wasn’t already. And boy do I hope he was already.

So listen to this sheriff at 1:40. This suggests that the FBI might be wise to investigate his potential involvement or foreknowledge of this plan or other illegal activity by this group. https://t.co/abgIttB1RH