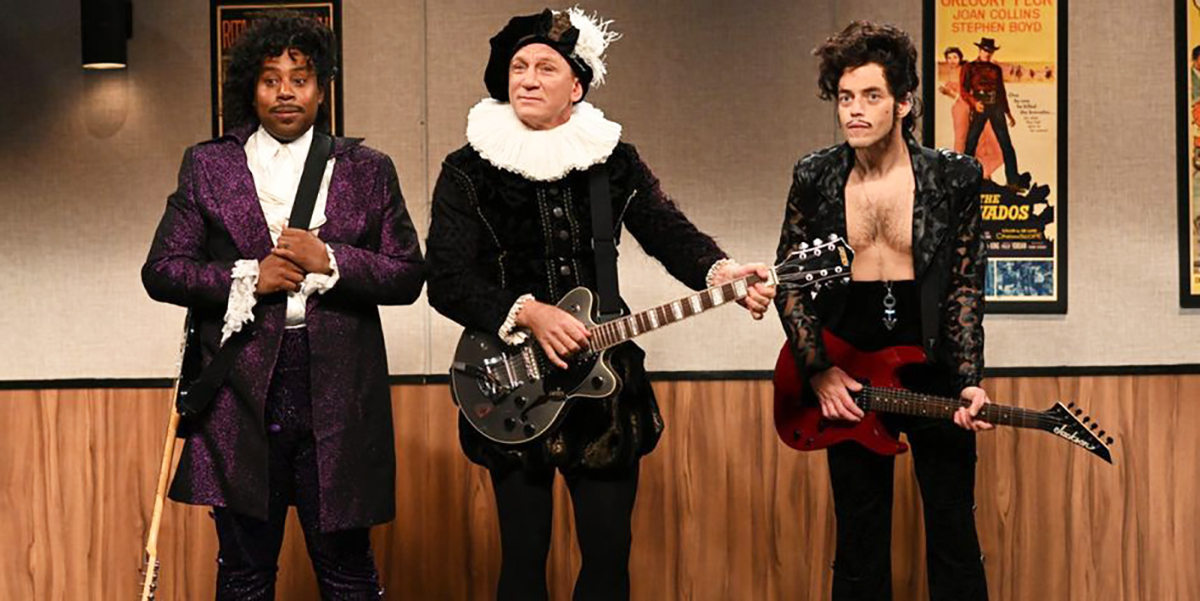 Rami Malek hosting Saturday Night Live seems like a weird pairing at first, but it worked wonderfully. Though he’s known for often playing intense and broody characters, Malek proved to have great comedic timing. He was personable and hilarious and poked fun at himself while pretending to be Pete Davidson, and he even brought some famous friends along with him to enjoy the ride.

Notably, a certain someone he shared the screen with in No Time to Die—his co-star Daniel Craig, aka Bond, James Bond.

Throughout the night, Malek played plenty of hilarious roles (like a little boy named Johnny who was dressed like a stink bug who just wanted to be a fun bug like Bowen Yang’s Daddy Long Legs). But it was when Kenan Thompson and Rami Malek played “themselves” and went in to audition for the role of Prince in an upcoming biopic that things got … well, interesting.

The sketch features two “auditionees” pretending to be Prince in a wide range of scenarios and then it is revealed that it is actually Thompson and Malek auditioning. As the “casting directors” point out, in some ways Rami Malek looks like Prince here and Kenan Thompson doesn’t, but Thompson is Black and Malek is not. Malek tries in vain to protest that his parents are from Egypt. The sketch brings up an important conversation about race and casting in a comedic, knowing fashion. However, this is all derailed after Thompson is offered the part, but Daniel Craig comes into the audition and instantly gets the role because he’s James Bond. Even though he thought he was auditioning for something called The Prince in a renaissance doublet.

Craig came back later in the episode as a man on a date spending a “ridiculous” amount of money on a show to see Angelo. Angelo is a musician who only needs one word to take the audience on a magical musical journey, but Lance (Craig) doesn’t really get it, even if his date does. He’s confused, he is just sort of there for the ride, and everything is made only better by adding Todd (Malek) to his set.

Personally, my favorite sketch from the night is when Denise (Aidy Bryant) and Richard (Rami Malek) are trying to find the right mattress, but they keep acting out little scenarios for themselves while on the mattress, much to the confusion of the salesmen (Bowen Yang).

Don’t worry though, that wasn’t it for our insight into the apparently excellent friendship between Daniel Craig and Rami Malek. At the end of the night when the cast was saying their goodbyes, you can briefly see Rami Malek jumping into Daniel Craig’s arms before the camera pans away, and I will never forgive that cut.

No really, in the righthand corner after Malek says his thanks, you can just briefly see him jump into Daniel Craig’s waiting arms and it was beautiful and poetic and then someone in the control room decided to cut away and whoever made that decision is now my mortal enemy. Release the hug cut!

Honestly, if Rami Malek and Daniel Craig wanted to host a comedy hour together, I’d be extremely happy about it.