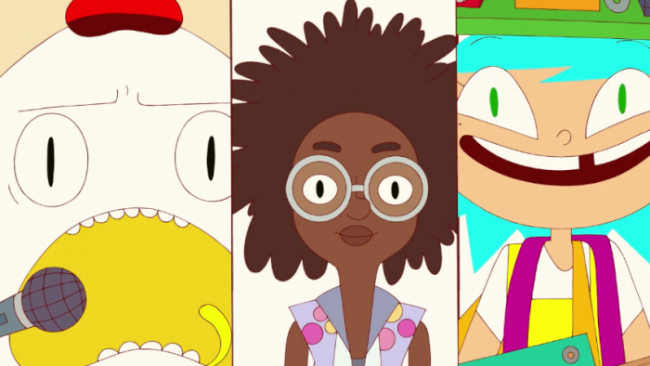 Like YA, children’s animation seems to be giving kids the #RealTalk, tolerance, and representation that stories made for adults can’t seem to handle just yet. Like Steven Universe before it, Danger and Eggs on Amazon is going a long way toward providing an accurate view of the world that includes the LGBTQIA community, without resorting to a parade of “teachable moments.”

Like the above theme song says, a lot about the show is “hard to explain,” but the basic premise is that it tells the story of D.D. Danger, a fearless, teal-haired girl who wants to be a stunt person just like her dad, and her cautious giant talking egg best friend, Phillip. Together, they have adventures, with D.D. throwing herself into danger and Phillip being overly cautious to protect his eggshell self.

These two characters are some of the most loving and welcoming characters you’ll ever meet, and in Episode 5 of the show, D.D. and Phillip make a new friend named Milo. Milo is introduced at the end of Episode 5, but is thoroughly a part of the gang in Episode 6, “The Trio.”

In it, Milo, D.D. and Phillip form a band called the Buck Buck Buck Trio and play a music festival together. All is great, until D.D. and Phillip learn that Milo has to leave town. They are really sad, and spend the episode dealing with the feelings surrounding losing and missing a friend.

And as you watch the story about kids dealing with having to say goodbye, you might almost miss the fact that D.D. and Phillip spent the entire time referring to Milo with them/they pronouns.

The show is created by Mike Owens and Shadi Petosky, who happens to be a trans woman. In an interview with New Now Next, she reveals that Milo (voiced by agender activist Tyler Ford) is only the beginning of the LGBTQIA representation. As you continue to watch the show, you will meet Zadie (voiced by Jazz Jennings), a newly out trans teen who sings about finally being accepted, gay dads, a lesbian folk duo, as well as join the cast in experiencing their town’s Pride celebration.

Says Petosky, “Our show never touches on ’crushes’ or romantic relationships in any way so it’s was a challenge to represent the community but not stereotype too much.” Danger and Eggs is aimed at an even younger demographic than Steven Universe, and Petosky is determined to ensure that things aren’t watered-down just because that’s the case

When talking about the Pride celebration on the show, Petosky says, “Those are Pride signs. They say ’Happy Pride’ not ’Rainbow Day’ or something other shows might do.”

If you haven’t watched Danger and Eggs yet, it’s an absolutely charming show, and it’s available on Amazon.