Texas Lt. Gov. Dan Patrick Wants to Sacrifice Seniors to Save the Economy

This is late stage capitalism. 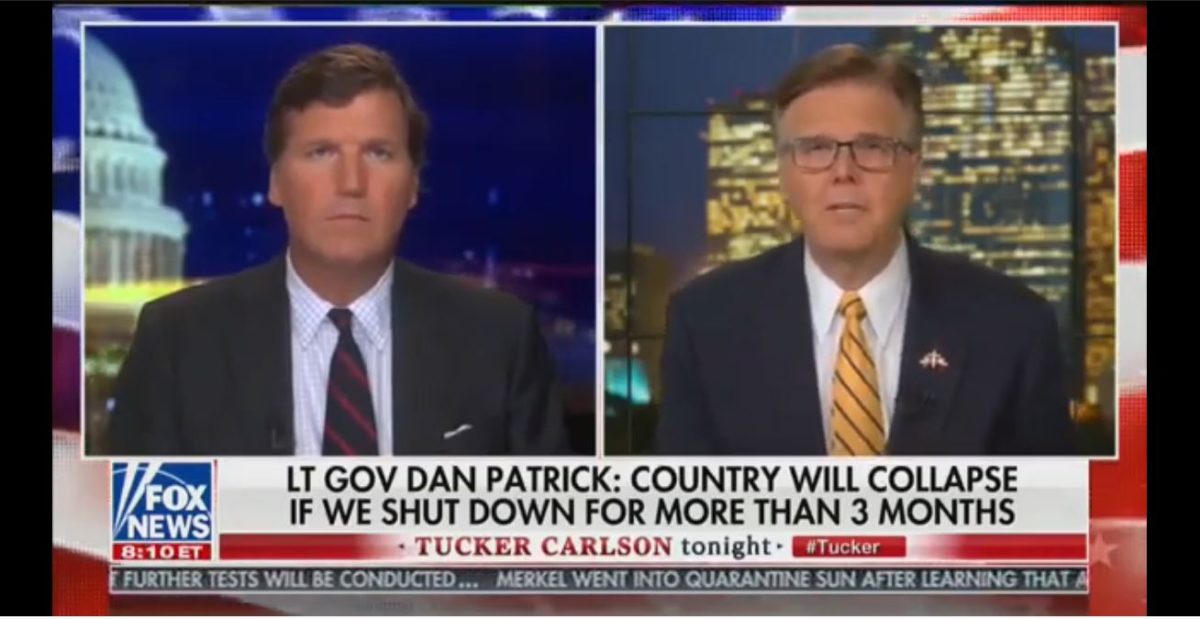 Last night, Texas Lt. Gov. Dan Patrick appeared on Tucker Carlson Tonight to discuss the COVID-19 outbreak, where he whole-heartedly endorsed Donald Trump’s pleas to put America back to work. Never mind that doctors and health officials across the globe have urged people to stay inside and continue practicing social distancing. Patrick is one of several right-wing voices elevating the alleged needs of the economy over human lives.

Patrick delivered his remarks, saying “No one reached out to me and said, ‘As a senior citizen, are you willing to take a chance on your survival in exchange for keeping the America that all America loves for your children and grandchildren?’ And if that’s the exchange, I’m all in … And that doesn’t make me noble or brave or anything like that.”

Ah yes, as generations have died for freedom from tyranny, Patrick now wants his fellow senior citizens to die so that his grand-nephew can get back to his afternoon shift at Cracker Barrel. What nobility, what sacrifice. Patrick continued:

“My heart is lifted tonight by what I heard the president say because we can do more than one thing at a time … We can do two things. So you know, my message is that: Let’s get back to work. Let’s get back to living. Let’s be smart about it, and those of us who are 70-plus, we’ll take care of ourselves, but don’t sacrifice the country. Don’t do that. Don’t ruin this great American dream.”

Welcome to late-stage capitalism, where Republicans are willing to throw seniors off of a cliff to preserve the stock market.

And no, it’s not the economy, it’s specifically the billionaires running the mega-corporations. Patrick is literally willing to sacrifice a generation of citizens because he doesn’t want the rich to be less rich. We’ve officially entered Ebenezer Scrooge “decrease the surplus population” style of discourse.

You know what will really kill the economy? The death of MILLIONS OF PEOPLE who went to work and spread the virus and brought mass death to the population. Even sentient polo shirt Tucker Carlson was incredulous, asking “You’re basically saying that this disease could take your life, but that’s not the scariest thing to you, there’s something worse than dying?”

Many took to social media to roast the Lt. Governor for his callous and truly bizarre comments.

This kind of numbnuttery will kill people in Texas. Young as well as old. We need a state-wide shelter in place order to stop the spread of coronavirus and save hundreds of thousands of lives. https://t.co/C8r9Q7t2vs

I love my grandparents very dearly and would not like to see them as human sacrifices at the altar of the stock market and did not realize this desire had to be actively defended! https://t.co/nRvtZ8ywnA

This is a ridiculous, dangerous and reckless statement by Texas Lt Gov Dan Patrick. We do not and certainly should not sacrifice people’s lives for the economy or anything else.
pic.twitter.com/QBK9f3pCsZ

Dan Patrick is enabling the deaths of countless Texans with his irresponsible, clownish behavior.

Stay home, wash your hands, and flatten the curve. https://t.co/165aax8Quu

And dangerous to Texans and Americans. https://t.co/7a7RbBUfN3

.@DanPatrick you should be ashamed.without protecting our elderly, we are nothing! I lost family and friends last days! And I’m empty…! https://t.co/ziQM5eWWss the economy! You are pro-life? Shame on you..@GregAbbott_TX fire him now! If not elderly should vote @TheDemocrats https://t.co/21Bn5YyM9g

Never in my wildest nightmares did I imagine an elected official of either party would talk like Lieutenant Governor Dan Patrick did. It is essential for the soul of this nation that he be repudiated in the strongest possible terms by major Republican leaders.

The Lt Gov of Texas Dan Patrick admitted that reopening businesses now will cause coronavirus to spread and kill Americans. And he supports that. So does Trump. Republicans have completely lost their fricking minds. No sane person wants anyone to get sick or die from coronavirus.

Or call him at:

Thank you for your brave words, sir. While I treasure my time with my parents, I am willing to let them die a painful, suffocating death so I can buy a new TV sooner.

Texas Gov. Greg Abbott: I have found a way to live with the logical fallacy of being both pro-life and pro-@NRA.

Since his comments, #NotDying4WallStreet has begun trending. I mean, set aside for the moment that this is a mercenary and heartless recommendation—these seniors Patrick is happy to sacrifice make up a large number of Fox viewers and Trump supporters. Even from a selfish, self-serving angle it doesn’t make sense. It also is a fallacy: many, many people severely affected by COVID-19 are not seniors. Patrick is calling for no less than mass death in an attempt to make money for business. Not to mention that the economy would be further destroyed by the widespread death of millions.

It is a horrifying absence of political imagination to prefer letting millions die to, say, trying an appropriately sized basic income and mobilizing the economy to surge health resources for 3-6 damn months.

Our choices are not mass economic deprivation or mass death.

If you’re a Democrat running in Texas, just put this clip on a loop in all of your ads. It speaks for itself.