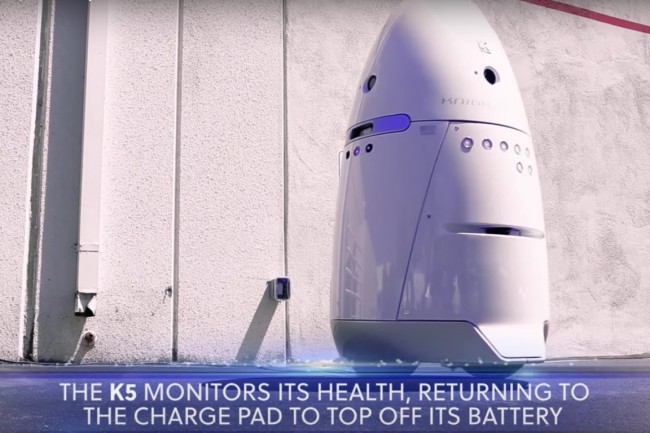 The whole point of a security robot is to protect people and/or things, which makes a recent incident with one in the real world (in case you hadn’t realized we’d reached that level of “future” yet) that much more upsetting: A 300-pound, Dalek-shaped security robot knocked down a toddler and then proceeded to run the child over. Where are those AI safeguards we talked about, Google?

Despite its behavior, the robot in question is not an actual Dalek (as we know, those still have fleshy organisms inside and technically aren’t robots) but a Knightscope K5 security robot. Microsoft employs these same robots at its Silicon Valley campus, but tech headquarters have one notable difference—a general lack of children—from malls, which is where Tiffany Teng’s son encountered the robot.

Adults may, for the most part, be large enough for the robot to notice and avoid, or they may be aware enough to avoid it themselves, but a 16-month-old toddler enjoys neither of those advantages. When the Teng family went to the Stanford Shopping Center in the heart of California’s Silicon Valley, the robot first approached them slowly before knocking into the child and then running over his foot and scraping his leg as Tiffany Teng tried to push it off. Luckily, her son made it through the incident with no serious injuries.

CNN reports that Knightscope’s account of the incident is a little different, saying the robot tried to steer to the side and avoid the child, but he ran backwards in front of it. Teng, on the other hand, insists her son isn’t capable of running backwards. Maybe he stumbled backwards after an initial glancing impact? The K5 is capable of recording video from four cameras around its body, but that doesn’t mean it captured everything entirely clearly—and either way, the robot shouldn’t have trouble avoiding a child. CNN also mentions that a mall employee said this was the second such incident involving a child, but this is the first one reported to Knightscope.

Stacy Dean Stephens, Knightscope vice president of marketing and sales, said, “Hearing a report that one of our machines may have injured someone is absolutely horrifying. Our core mission is to ensure public safety, and we are taking this report very seriously.” The company has extended an offer for the family to visit their office and learn more about the robot, but unsurprisingly, Teng isn’t enticed by the offer.

As robots become a more prevalent part of everyday life, we definitely need to work on making sure they’re not doing more harm than good. Safe navigation is a key issue, and there are technologies in the works, and surely more to come, that should help things along and hopefully avoid issues like this in the future.