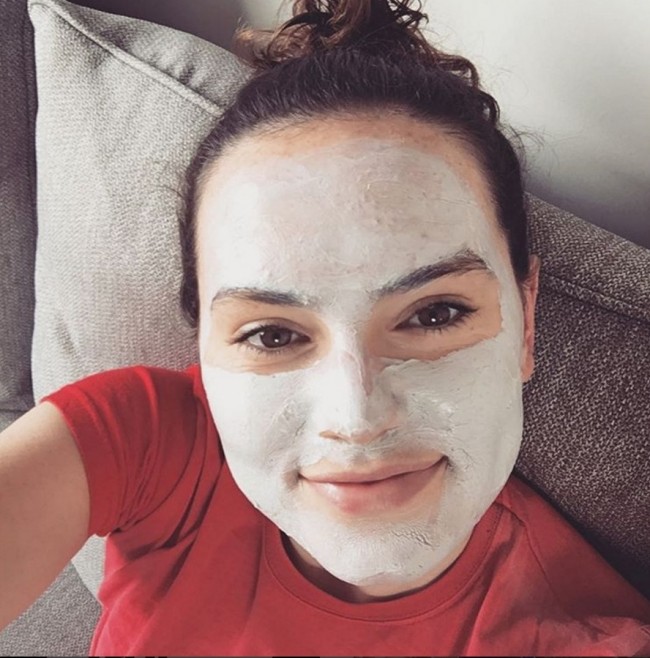 In “This is Why We Can’t Have Nice Things” News, Star Wars: The Force Awakens’ Daisy Ridley, light in the social media darkness, has left Instagram. Why? Because a certain subset of vocal “fans” couldn’t deal with her getting even remotely “political.”

According to The Nerdy Bird, Ridley had posted a message to her social media, which is still up on her official Facebook page, and said:

Thinking about how lucky I am like……… Serious bit: as I sat in the audience yesterday tears were streaming down my face at the tribute to those that have been lost to gun violence. I didn’t get a great picture of the incredible group that came on stage but they were so brave. It was a true moment of togetherness. We must ‪#‎stoptheviolence‬

She was referring to the Teen Choice Awards, which were held on Sunday night, and at which Jessica Alba led a call to end gun violence alongside teens related to recent shooting victims in Orlando, Baton Rouge, Louisiana, Newtown, Connecticut, and other places, according to ABC News.

Somehow, her comment on the bravery of these survivors, or her expressed desire to end violence meant she was suddenly “too political” for certain people. Because, of course, the only things celebrities are allowed to talk about on their own social media feeds is fluff.

While we can no longer see what comments she got on her Instagram, because it’s gone, we can get the basic gist from the comments on her Facebook, which were also gathered by Nerdy Bird, Jill Pantozzi:

First of all, I love how this person thinks they can speak for any Star Wars fans other than themselves, but even “better” is the fact that a person expressing a desire for an end to violence can somehow “ruin” their film for someone.

Bye Felicia! I don’t think Ridley needs fans that can’t separate the events in a fictional film story from actual, real-life opinions and events. No one needs fans like that. If Daisy Ridley played a drug-addled serial killer in a film, would people then be disappointed that she wasn’t going on a cross-country killing spree in real life?

These may not look terrible, but we also have no idea what Ridley was getting at Instagram. On top of that, this certainly isn’t the first time she’s been harassed online. So, it may be that this incident, while possibly “not as bad” as the others, may have been the last straw.

As if attempting to dictate what Ridley can say or not say isn’t already inappropriate fan behavior, some fans took to bugging John Boyega, asking him to convince her to get back on Instagram. (the level of entitlement it takes to not only tell Ridley when she may speak, but reach out to her celebrity friends expecting them to be on your side is too high to be believed!) He answered, only to support her decision: 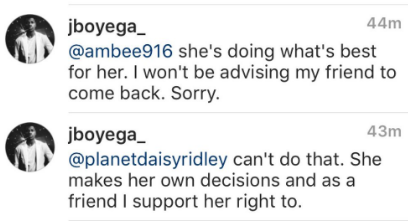 Celebrities are people. And I don’t mean that in the superficial “They’re just like us! They go to Starbucks!” kinda way. I mean, they are human beings deserving of respect. They are also human beings who are going to have all sorts of opinions about the world around them. As we all do. While I believe that anyone with a large profile should wield their words carefully because there’s an imbalance of power (as Jessica discussed in her post about William Shatner yesterday), I also believe that they have the same right as anyone else to express their views publicly — political or otherwise — if it’s a part of who they are.

What’s especially frustrating about this is that Ridley has always used her Instagram beautifully. She managed to strike the right balance between the personal and the promotional. She was always kind, and she really seemed to value having a quality connection with her fans. What’s more, she’s always used her social media feeds for good. Her statement about wanting to end violence didn’t then go on to propose a solution re: gun policy, for Goodness’ sake! And yet, people were ready to jump down her throat at the merest whiff of any kind of a stance — a stance she wasn’t even taking.

And, of course, there’s a part of me that wonders if the same harassment would’ve happened had John Boyega, Adam Driver, or any of her other male co-stars expressed a similar sentiment.

As disappointed as I am, I certainly don’t blame Ridley for leaving Instagram if it was no longer a safe place for her to be. Her mental health and well-being need to come first. We at TMS will always have your back, Daisy, and we’ll keep up with you wherever you choose to go next.