Diary of a Teenage Girl Is Smart, Wonderful Filmmaking 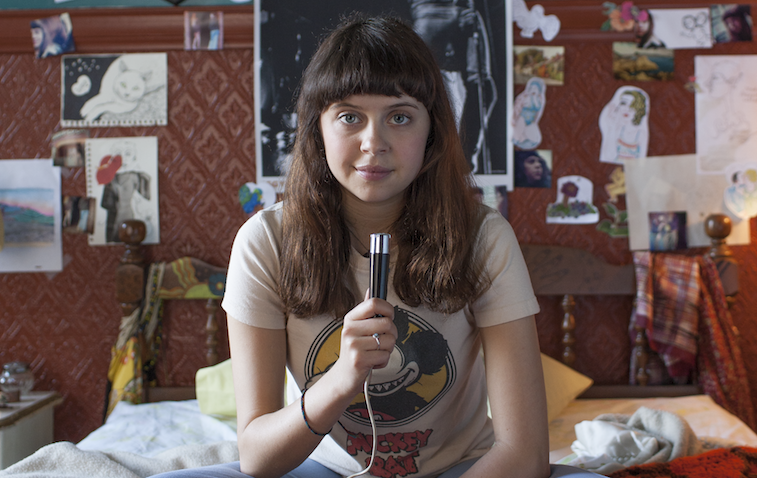 The amazing things about a movie like Diary of a Teenage Girl is the sheer confidence on hand which is so apparent behind the screen from the minute the movie starts. There is a sense from writer/director Marielle Heller (a comic actress before this) that she knows not only exactly what she is doing, but what she personally wants to say to the audience. And by the time the film comes to an end, you can sense that she has done exactly what she set out to do. And more importantly for this stylish dramedy, the statement about how necessary it is for teens to find self-love and acceptance is a message worth making, but rarely has been in movies.

The film is set in 70s San Francisco in the post free-love, booming feminist movement era. Minnie (Bel Powley) lives with her mother Charlotte (Kristen Wiig), a woman who married and divorced in the 50s, and married Pascal (Christopher Meloni), an overly serious, conservative professor, and divorced him to live the single life. She is now dating a younger, health-fitness salesman named Monroe (Alexander Skarsgard). Minnie’s sexual awakening is in full bloom and confused, and most importantly feeling unloved by her self-involved mother, accepts the sexual advances from Monroe and begins to pursue him as well.

Heller wisely avoids making this into a Lolita story which places blame on Minnie, but still allowing her to be a sexual girl without passing judgement or shame. There is never a moment when Monroe is suggested as anything but guilty for having this kind of relationship, even if at times he is less a predatory monster and more or a pathetic loser. Heller makes it clear from the very beginning that while she accepts his advances and appears willing to have sex with this man, she still has the mind and emotions of a girl. Minnie always seems to be so clearly at the point of becoming a woman but never appears fully mature. Just the dialogue fits perfectly into selling this very difficult line between girl and woman…Minnie is smart and articulate, but articulate for a teenager, not an adult. And the way she talks suggests a teenager trying to sound older and more confident than she really is.

A lot of this is because of just how phenomenal star Powley is in the movie, who despite being a 23 Londoner, feels very much like a 15 year old American girl. And even while playing a girl with pretty severe problems, her Minnie is always completely lovable. It is painful to listen to her talk about the complete lack of physical affection she receives from her mother and shamed for not being “prettier” by her mother or “more feminine” by her step-father. She suffers from such low self-esteem, that every rejection feels like a sword poking her. And this low self-esteem is causing her self-destructive sex life to perpetuate. The only affection she is given seems to come from Monroe, but after every encounter, she becomes more dependent on that outside validation. It should be said that Skarsgard is the other actor in this movie who really seems to be on another level. Somehow he manages to be a total creep, but the kind of creep this likable girl (and her mother) would find charming and attractive. And Minnie and Monroe’s later scenes together, when the power has shifted, are really something to witness from both actors.

Wiig and Meloni are both fine in the film, but just aren’t as vivid as Powley and Skarsgard, although Wiig probably hasn’t played a character this unlikable before. But Powley’s Minnie should and needs to be the one holding the audience’s interest from start to finish, and she more than accomplishes the task. This is her story and her point of view, and Heller knows how to present her specific truth. Everything from the choice of music and clothing, production design and side characters, feel real but still have a hint of nostalgia…as if she is remember all these events from a bit of distance and perspective. The film is based on Phoebe Gloeckner’s semi-autobiographical graphic novel, and Heller uses some animation to present Minnie’s artistic interests and enhance the narration (done on a tape recording rather than in a diary). It makes sense that a movie so purely in Minnie’s head, who is a budding artist and finds refuge in this work, would see these events that way, and Heller doesn’t go overboard with incorporating them.

Because of this kind of animation the movie will probably be compared to American Splendor or Ghost World. Watching it, I was reminded of another film…The Last Picture Show. From the use of a certain sense of period specific melancholy to stress how tough and confusing growing up can be, and stressing Minnie’s solitude, there have been few film which really capture the pain that comes from the teen years this well. And yet, few films which really earn every laugh and give a hopefulness so nobly. Heller and her team have made a truly special movie; one which creates a brilliantly specific personal story with ideas that truly feel universal and feels destined to stick with audiences.