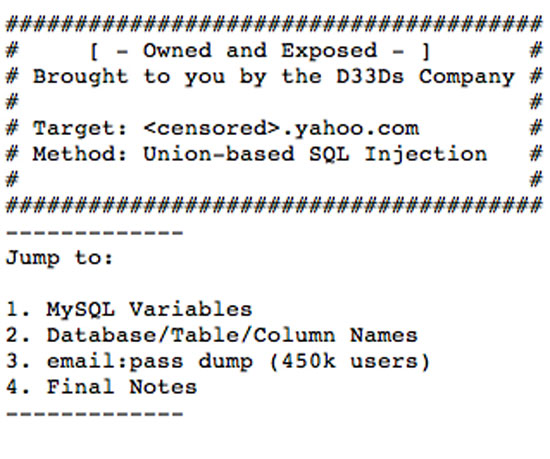 Have you had to change your login information in a paranoid fever after discovering that a major online service provider has been hacked in the last few weeks? Well, if you have a Yahoo! account, you might have some worrying to do. A hacker group called D33DS Company has apparently dumped 453,492 usernames and passwords obtained in plaintext from a Yahoo! service.

Ars Technica is reporting that usernames and passwords allegedly from Yahoo! were posted online by the D33DS Company group. Other sources indicate that the user information was specifically from the Yahoo! Voice service, formally known as Associated Content.

Apparently, the hackers were able to obtain the plaintext list of passwords and usernames using a MySQL injection attack. Ars explains the methodology behind the attack thusly:

At the end of the dump is a note from D33DS Company, which reads:

We hope that the parties responsible for managing the security of this subdomain will take this as a wake-up call, and not as a threat. There have been many security holes exploited in webservers belonging to Yahoo! Inc. that have caused far greater damage than our disclosure. Please do not take them lightly. The subdomain and vulnerable parameters have not been posted to avoid further damage.

Unfortunately, the D33DS Company website is having some trouble staying online as of writing. However, it does appear to contain the reported list of credentials. Also, if you think that “thx1138” is a unique password, you’re wrong.

However, a fully searchable version of the list — sans passwords — is up on Dazzlepod. If you’re concerned that your account may have been compromised, you can search for username and see if it pops up on the list.