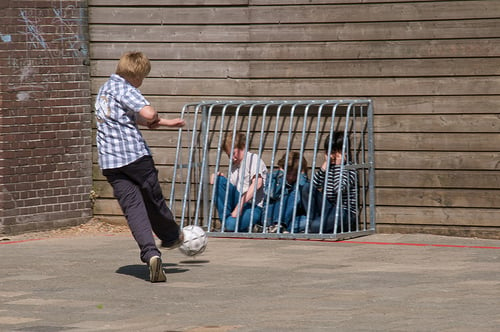 Good news and bad news from the world of grade school harassment today. The good news: The dramatic uptick in cyberbullying may not be the scourge of today’s youth that it is sometimes made out to be, according to a just released study. In fact, even with all their newfangled Internets and Facebooks, kids these days are still more likely to be pushed around by their peers in person than they are online. The bad news? They are still pretty likely to be bullied in the traditional manner, facing name-calling, locker stuffing, and all the other myriad pleasantries that consistently made junior high the best time of anyone’s life ever.

Norwegian psychologist Dan Olewus of the University of Bergen gathered data on bullying from thousands of schools in the U.S. and Norway, and presented his findings at the annual convention of the American Psychological Association over the weekend. Those findings suggest that, while online forums give kids a new venue to be picked on, they probably don’t cause all that much more actual bullying.

“These results suggest that the new electronic media have actually created few ‘new’ victims and bullies,” Olewus said in a statement. While 18% of U.S. kids in the study reported being bullied between 3rd and 12th grade, only 5% reported having been bullied online. The other 13% were subjected to the taunts, wet willies, and purple nurples that dominated the playground before you could liveblog giving someone a swirly. The same study found that many victims reported being cyberbullied by people who had abused them at school as well. This means that while bullies have a new venue for their mean-spirited  — and yes, potentially scarring — behavior, the core of that behavior and the people involved in it remain pretty much the same.

Is cyberbullying awful? Yes, it is, like all bullying. But is it an epidemic? Looks like not so much. And it’s kind of comforting to know that while the Internet helps jerks be jerks more efficiently, it probably doesn’t turn the rest of us into jerks just because we have the opportunity.