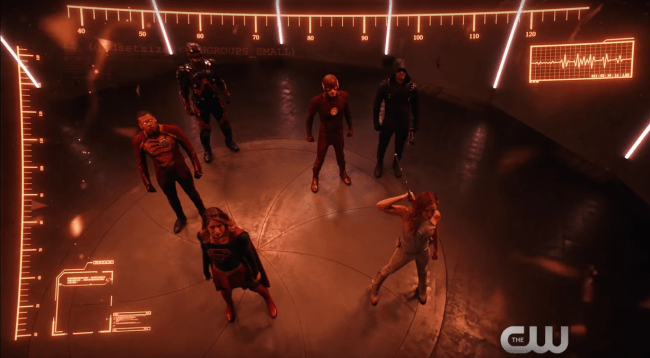 With the advent of Fall came the premiere of several of our favorite CW superhero shows. After decent amounts of buildup from all heroes involved, we’re on the cusp of a massive television crossover. Flash, Supergirl, Arrow, and Legends of Tomorrow are all joining together in a weeklong crossover event beginning on November 29th. Thanks to a chat between Arrow producer Marc Guggenheim and ComicBook.com, we now know that each of the crossover episodes will also share a common title: “Invasion!” Yes, that totally includes the exclamation point as well.

Guggenheim said of the titles:

Arrow episode 508 is called ‘Invasion!’ with the exclamation point. And Legends of Tomorrow 207 is going to be ‘Invasion!’. I’ll leave it up to you to guess what The Flash is called.

Obviously there’s plenty to be stoked about, seeing as how this’ll be one of the (hopefully not rare) occasions in which we’ll get to see all of the CW’s heroes fighting together.

But who will they be fighting? Apparently the crossover will echo the Dominators storyline from the comic books, wherein an alien race invades (get it) Earth to cull the growing meta-/superhuman population. Already we’re seeing Supergirl showing how the resentment of meta-humans has played out amongst the non-meta-human population, with the people of Project Cadmus fomenting hatred and even outright rebellion against Kara and her allies.

The addition of Supergirl to this universe is especially notable as she’s something of a new kid on the block, having only just premiered on The CW after crossing over from CBS. Everybody else, though–Flash, Arrow, the Legends, and everyone around them–they’re all pretty solidly familiar with each other, as crossovers are a pretty regular occurrence in the Berlanti-verse.

Speaking of being stoked, here’s a fun promo photo to keep the fires burning (via CBR):

Will you be checking out the weeklong event starting on November 29th?