Review: The Curse of Sleeping Beauty Is a Snooze-Fest 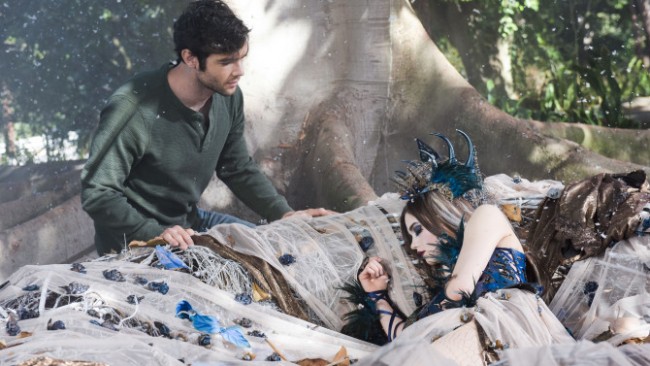 Fairy tales have been told, retold, modernized, and altered since falling into the cultural lexicon. The current trend seems to be returning (or claiming to return) to their original darkness. The not-so-great (but not terrible) prequel/sequel The Huntsman: Winter’s War (although, still love Emily Blunt riding that bear … awesome!) came to us last month, and now there’s a small budget film taking inspiration not from Snow White, but Sleeping Beauty.

The one thing I can say in favor of Curse of Sleeping Beauty is that it commits to that Grimm darkness—but embracing the darkness doesn’t necessarily make everything better, and the darkness here doesn’t make up for how unbearably dull it turns out to be.

Ethan Peck continues a string of not-so-great genre films (In Time, The Sorcerer’s Apprentice) but is the lead this time as Thomas, an artist with sleep paralysis who dreams of Sleeping Beauty (India Eisley). It should be noted that the above image is from the dream sequences, which are really nice to look at, but they only make up about 15 percent of the movie. As beautifully as those scenes are designed to create a dreamy, sexy horror image, it doesn’t make up for the total lack of chemistry Peck and Eisley have on-screen (I had terrible flashbacks to that sand scene in Star Wars: Attack of the Clones). Eisley is the kind of actress tailor-made to be in horror, and considering the ending, I sense everyone knew they shouldn’t have sidelined her as quickly as they did in this movie.

Ultimately, the movie takes place almost entirely in and around a present-day haunted house and follows Peck, not Eisley. Peck’s family has the Sleeping Beauty curse, which requires the male heir to live inside because they’re tied by blood to the house. I appreciate that explanation, because it avoids that too common “why stay in the house?” question, but wow can people figure stuff out fast in this movie! It isn’t just full of expositional dialogue—all these characters seem to have ESP in order to make their logical jumps so quickly—and while the production design of the house by Alessandro Marvelli is good for this kind of movie (and too good for this one in particular), the scenes are shot with such dark filters (possibly to cover up some less impressive effects) that it’s hard to get scared, because you don’t see exactly what happened.

So the house is “haunted,” and Peck needs to figure out what the curse is with the house he inherited from his uncle. He gets help from a very eager realtor (Natalie Hall) and her friend Richard (Bruce Davison)—you know, the paranoia expert type who lives conveniently close by all these horror movies. Again, the ability of these characters to figure stuff out without evidence or logic is kind of amazing. They get the help of a friend (James Adam Lim) to crack the code of the curse (note to filmmakers: speeding film up in a comedic style isn’t great for horror), and then they go back to the house to wait Sleeping Beauty.

Then there’s an ending for Sleeping Beauty herself that left me baffled, but in case you are curious about watching this, stop reading now. Major spoilers below.

Eisley returns as Sleeping Beauty/Briar Rose … but is actually a demon whose evil has been re-awakened? I have to admit that I didn’t expect that twist—at all—but why hold the most interesting and original thing in the whole damn movie until the last 5 minutes? Why isn’t this just the movie? And more importantly … did you really think people would want the sequel you seem to be setting up?

The strange thing about that abrupt ending is that the movie’s less than 85 minutes (82 plus 4 minutes of credits), but it still feels long because it’s so boring! The script is pretty bad, with lines like “May the spirits be on your side” almost making me laugh, and besides the lack of chemistry, Peck isn’t a very engaging performer to spend even that much time with. They clearly want to make him the classic, old-fashioned everyman (all the PR for this movie focused on him being Gregory Peck’s grandson), but he doesn’t hold the screen’s interesting long enough to care what happens to him next. More disappointing is the fact that I’m a big chicken about haunted house movies (I literally yelled during Insidious 2), but this movie just isn’t scary, because you see every scare coming without seeing much actual horror.

Pearry Reginald Teo clearly has technical and artistic skills as a director, but the lack of real originality and interest in characters suggests he isn’t a real storyteller … yet. There’s almost no reason that this movie should focus on Sleeping Beauty (it could just as easily been Snow White or just based on general fairy tale imagery), and if you aren’t going to comment on the public’s awareness and preconceived ideas about the fairy tale you choose, isn’t it just a wasted opportunity?