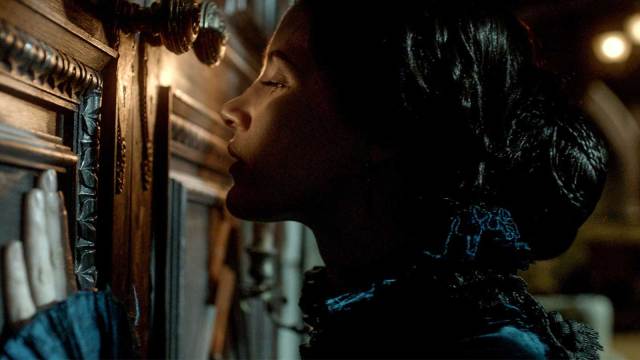 One of the coolest trailers in recent memory has to be the one for Crimson Peak. A haunted mansion, gothic setting, and three of the top stars working with a superior filmmaker was a pretty exciting promise. Add in the glimpses of the monsters and ghosts, and I know many people, myself included, were excited to put their money down then and there. And Crimson Peak definitely doesn’t disappoint as fun, scary piece of cinematic entertainment, but I also suspect a lot of people aren’t going to see what they anticipated, and that will leave some disappointed. However, some of the audiences who have decided to hold off seeing it because it is defined as a “scary movie” might be missing out on one heck of a fun night at the movies.

Early on, our protagonist, Edith Cushing (Mia Wasikowska), tells us she has written a novel with ghosts, not a ghost story, and take that statement as a warning from writer-director Guillermo del Toro. Yes, there are ghosts in this story—and ghosts that had me jumping out of skin—but the movie isn’t really about them, and while their metaphorical use is powerful, the story could be told pretty much the same way without them. It wouldn’t be nearly as fun, but plot-wise, the ghosts are simply clues. So, the question becomes how much to divulge. You know Jessica Chastain and Tom Hiddleston are in this movie too, and Charlie Hunnam gets top billed credit but barely appeared in the trailer, so let’s say this: If you think there must be something very wrong with the siblings played by Hiddleston and Chastain based on their behavior in the trailer, you would be right.

Now, there is a sequence later in the film that I’m DYING to talk about, because I was so tickled by Chastain’s performance, but I won’t. But let’s just say she’s amazing, and if Hollywood had guts, they would be putting her up for supporting actress for this movie. She’s really good in The Martian, but she’s stunning in this film, and this movie is so ridiculous at times that the fact that Guillermo del Toro has three unbelievably strong actors to play off of and sell the hell out of the material is his greatest asset. Almost performing theatrically, they make the whole thing feel tighter and better than it otherwise would with less compelling and charismatic stars.

And Chastain was right regarding her recent comments that del Toro writes women well. Antagonist or protagonist, lead or supporting, Wasikowska and Chastain both get a chance to sink their teeth into meaty roles, and seeing them sparring is nothing short of a delight. Hiddleson, playing the more passive character, is probably the one lead underwritten, but he’s so good he fills in the gaps and makes the character of Thomas into a man who is just as uncomfortable as he is charming. Wasikowska’s attraction is completely believable, but so is her father’s (Jim Beaver, who is pretty delightful in the movie) apprehension about him.

But as the trailer first suggested, this movie really is something to behold on the biggest screen possible because of the shear visual magic Guillermo del Toro is able to create. It’s nothing short of a visual, technical, artistic experience to delight in. Yes, the story sucks you in, but it works beautifully in tandem with the visuals. Even at the beginning, when the movie is little more than a Masterpiece Theater period drama about the courtship of the daughter of an American businessman and English aristocrat, the clothing and architecture is still beautiful, and the sense that this can’t be it (we came to see ghouls) makes the movie feel even more like parody, so the second and third act feel more absurd and have a larger shift in tone.

And then things change, and Edith is taken away to that place we’ve been promised. The house Edith is taken to live in after marrying Hiddleson’s Thomas is old and falling apart with a literal hole in the ceiling that lets the weather in, and it’s sinking due the red clay the siblings turn into a substance that looks like lava. This allows a perfect opportunity for the house to literally look as if the walls are bleeding, and de Toro goes so far in his visual approach that it shifts between being so ridiculous it’s funny to something genuinely creepy.

And then, some ghosts that appear to be bleeding come out and scare you, and they’re truly terrifying character designs. You scream and jump in your seat, and then (as it should be) the audience laughs because of the scare. Guillermo del Toro loves to give audiences that duel reaction, and he does that with so much skill behind and in front of the camera that you can forgive the fact that the story and characters aren’t that original. There is so much borrowed from classic novels, short stories, and films that mentioning them by name would amount to a spoiler, but if del Toro wants to retell these classic stories, no one can question that he tells them in a manner very much his own.