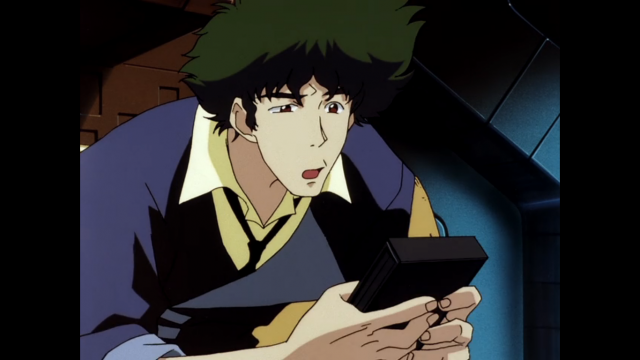 We’re spoiled fans because in “Speak Like a Child”-an episode that makes me wish more of the series overall resembled it-we get more of Faye’s backstory, even if it all remains largely mysterious. This is, I think, what I initially expected the series to be like when I first began it. While on the whole I’ve largely enjoyed my Cowboy Bebop experience, and am certainly excited to see what the last bunch of episodes have in store for me, I had a preconceived notion of the tone of the series that never really added up.

However, “Speak Like a Child” is everything I ever wanted the show to be with its consistently playful attitude, the hijinks that ensue when Spike and Jet go off to find the beta player, the tongue and cheek time humor about VHS players (and how stupidly breakable they are) and even some genuine emotional punch.

I loved this episode and I can’t wait to see if anyone else agreed with me in the comments-maybe for me it was just something that struck the right balance of everything I love in an action adventure story.

The storyline immediately breaks up the group. Faye returns from the races, having lost (again) and is told by Jet he received a package for her and even had to pay for it. She see’s it and takes off, worried it means she’s being threatened by someone she owes money to.

This in and of itself angers Jet, who brings Spike along with him to try and sell it. The divergence of the plot works well, as we see Faye continue to run from any sort of hint of her past, and we see Jet and Spike doing what they do best, following through with any task, no matter how ridiculous this is. It leads the two to a shop where the owner collects all things classic video, but they’re soon kicked out when Spike, forever unable to be interested in matters that don’t concern him, breaks one of the owner’s machines.

This only grants Jet a small amount of time to see the video and is instantly obsessed with finding out what’s on it and why it matters so much, leading them on a chase across the universe to earth, where there’s supposedly a treasure trove of old video players. If there’s anything that is always genuinely impressive about the show (aside from the music) it’s the animation when we see the crew in space travel, particularly anything involving the portals. It offers up some truly gorgeous visuals as well as giving us a sense of what type of future our characters are living in.

Their trip to earth doesn’t result in much beauty however, as the planet is nearly barren. Jet and Spike rough it through an old, crumbling building, and it seems they can’t move an inch without something breaking or causing near injury. The music in this scene (and the episode as a whole, really) is just plain fun, more upbeat than usual, and it elevates the scene’s already purposefully comical tone. I love how increasingly dejected the two look the closer they get to finding what they’re looking for, totally disenchanted with the idea of adventure. While they might be sick and tired of their chase, I was immensely pleased in seeing the series break from their bounty of the week structure. The only new character was the store owner but otherwise it was just the Bebop crew. This and “Toys in the Attic” have worked so well for me because they focus solely on the characters we know.

The big punchline to the chase is that the video player they bring back is a VHS, not the beta player they need. This is very quickly fixed, however, when Faye receives another package, this time being the beta player they need to play the video. They all sit down to watch, even Faye who has returned, believing the crew miss her, only to be turned away when she refuses to play Jet back for fee for the delivery. Of course she doesn’t actually leave the room, which makes the video all the more emotionally resonant.

From a mystery sender, the video show was is presumably, a young Faye, making a video time capsule to her future self and offering words of encouragement with youthful abandon. All of the crew is silent while watching, as Faye (visibly moved) herself can’t manage to remember this girl she sees on screen, can’t remember herself this young, carefree or warm. It’s another example of how Faye came to be, and why she’s as cynical as she is. It’s a tremendously done scene that is a sucker punch of emotion after an episode that was relatively light in comparison. A great end to a great episode.