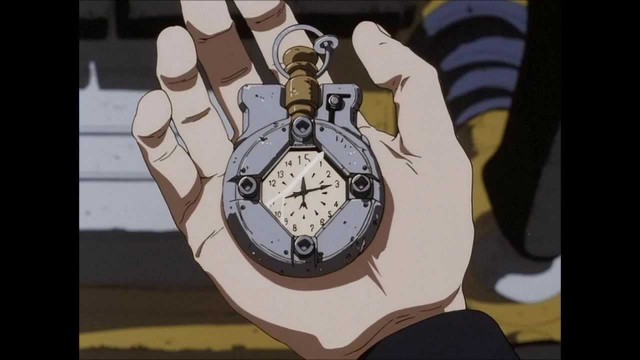 Catch up on the rest of the Cowboy Bebop newbie recaps!

From the comment sections, I had been lead to believe that the Jet centered episode I watched this week was likely going to be on the tedious side of things. However, despite some confusing overall plotting elements (which I’ll get to later) and a needlessly gratuitous sunbathing sequence (ditto) I found this episode on the whole rather enjoyable.

To the (very) iffy elements first.

If there’s anything that was truly a bit of a head scratcher in the episode, it was the placement of the episode as a whole. I’ve gotten over my issue with the show not being very serialized and will probably continue to enjoy the episodic, atmosphere heavy nature of the show, however, you would think with the recent introduction of Ed to the team, we’d have a more team oriented episode. Instead, it’s Jet centered, the group is pretty much splintered up for the episodes run time, and Ed maybe gets two lines total. You’d think that the show would have used to momentum of it’s newest character and done and episode which utilizes the bizarre group dynamic the crew shares.

My other grievance, and boy is it a knock out, is that Faye is ONCE AGAIN used for eye candy. I don’t mind that she’s drawn to be conventionally attractive or that she wears gravity defying clothing. I don’t care that she’s written to care strongly about her looks and it shouldn’t. However, having a point of view shot directly at her breasts as she spreads on sunscreen goes from eye brow raising annoyance to slamming my head into a desk. How ridiculous and unnecessary.

Aside from those two aggravating hiccups, the episode was relatively enjoyable, more a peaceful stroll through Jet’s memory lane opposed to the hyperkinetic movement of some of the prior installments. Its truly Jets episode to shine as the crew are forced back to his home planet, where he hopes to check in on his ex, Elisa, after having not seen her in a few years. Both Spike and Faye believe this to be a poor idea, for entirely different reasons. Spike doesn’t believe that Jet is going to get the reaction he’s hoping and he’s right. Upon arrival to the bar Elisa runs, he finds her with a boyfriend.

The two take a trip down memory lane, both parties remembering their ending differently. Jet remembers simply being left one day (while he was still a cop) with nothing but a note and pocket watch. He can’t for the life of him understand why she would have left but over time tries to accept it and move on. We can tell from Elisa’s demeanor that there is more to the story but we won’t be hearing it now.

The rest of the characters don’t have much (or really anything) to do and while I didn’t find the episode a bore, I’m not convinced that Jet is an interesting enough character on his own to carry so much screen time alone. He works much better when he is working opposite Spike, Faye or both. The only alone time spent with the other members of the ship are Faye’s ridiculous sunbathing scene and a fun sequence with Spike as he completely lacks grace in trying to repair his ship.

(Side note: I love how the crews ships are always in some state of being wrecked.)

Of course it turns out the Elisa’s boyfriend has a bounty on him, something Spike instantly latches onto once he realizes how close in proximity he is to a potential pay out. What he doesn’t realize is how the bounty came to place and it’s nice to see that not everyone the Bebop crew are after are strictly villainous. Sometimes they’re like Elisa, who got in trouble with a loan shark when times grew tough, who had a boyfriend who in a panic pulled the trigger against their attackers. They wade in that pool of gray that makes Cowboy Bebop such a enjoyable show—the law and even its most strict followers all are playing by their own ethic code.

Jet soon catches wind that Spike is after them and intervenes, saying it is up to him to catch them. Surprisingly, Spike backs off and what transpires is one of the most visually interesting action sequences the show has done thus far. We’re treated  to a dizzying first person point of view shot, some fantastic and colorful aerial action, and a standoff at the end as Jet painfull drags in Elisas boat, set against a moody landscape.

Jet catches them and we get Elisas part of the story, as she tells Jet that he always treated her like a doll, incapable of making her own choices so she ran away and claimed her agency and path in life. I was pleasantly surprised that Jet in the end wasn’t painted to be the romantic victim, but rather, in part to blame for their relationship deteriorating.

Overall, not a bad episode, simply an oddly timed one. With Elisa and her boyfriend both looking to be relatively off the hook by the episode’s end, the episode didn’t have very high stakes. Instead it was a character study for Jet.

Oh well. I watched through the credits for the next episode sneak peek and I am so ready for Bebops version of Ghostbusters.