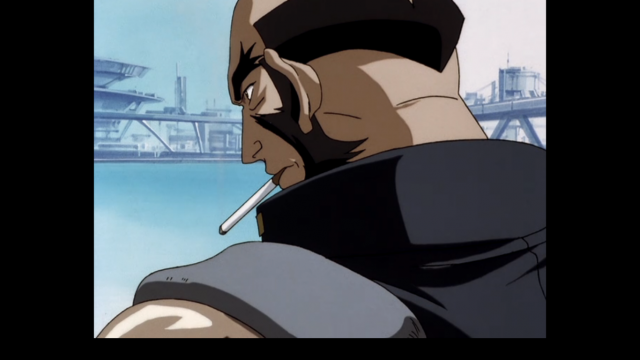 Sometimes the mystery is more interesting than the revelation, and how Jet came to lose his arm was never intriguing enough to me to warrant an entire episode to it. This isn’t to say that I don’t want to know anything about Jet, because a show would be unbearably dull if, as viewers, we were never able to understand the motives behind characters or understand why any of them hung around in the first place if they had no definitive personality traits. If anything, this episode does point out why Jet got out of his business, but it was a little too heavy handed with his being betrayed by a friend, and in the end, the mystery surrounding how he lost his arm and his past as a cop was much more interesting as just that: a mystery.

It doesn’t help, either, that Jet is essentially going solo in “Black Dog Serenade.” While it makes sense that Faye and Spike would sit this one out, having very little to do with Jet’s personal issues, you’d think they’d at least be game for chasing renegade death row inmates, just like how Jet and Spike got in on chasing Faye’s past suitor in “My Funny Valentine.” Instead, we’re saddled with a Jet-heavy episode that relies fully on his character to keep us interested, something that’s proven in the past to be rather ineffective. I’ve said before that Jet works best when he has the absurdity of Ed to ground him, the high energy of Faye to throw him off his cool exterior, or Spike’s hot head to keep him on his toes.

If there’s anything of particular interest for this episode, it’s that it’s much more gruesome than what I’ve come to expect. Sure, the show has its rare instances of violence, but they seem few and far between since the series opener, while “Black Dog Serenade” simply doesn’t relent. From the beginning with Fad and Udai in the cockpit of the ship carrying inmates after having killed the crew, to Fad putting a bullet in Udai’s head, the episode is relatively gruesome for animation.

Fad is an old comrade of Jet, and when Jet hears the name Udai in relation to a crime, he teams up with Fad to catch him, believing that Udai is the one who cost him his arm. If anything, this storyline does feature one of the larger-scale fight/chase scenes the show has done in a while, with Jet facing off with the inmates gone rogue. There’s an epic feel to the space battle, one that feels grander in scale than usual, and it’s the only real part that got my full attention. Even when it’s one of the shows “lesser” episodes, the animation is almost always breathtaking, even greater so when it’s set in the empty expanse of space, as this fight sequence is. The excitement of the scene seeps into the following one when Jet faces off with Udai directly, and fitting with the tone of the episode, the fight is brutal, with both combatants going for the kill.

Of course, then the talking begins, and that energy slips away, even if the revelation is genuinely a big one for Jet. Udai tells him that he wasn’t the one who took the shot at Jet that fateful day, but his own partner, Fad. Fad takes his shot at Udai and continues the story, telling Jet that he double crossed him because Jet was a threat to the syndicate, and Fad was on the syndicate’s payroll.

“You just couldn’t play the game like everyone else.”

When it looks like Fad is going for his gun, Jet dives for his and pulls the trigger, mortally wounding Fad, something Fad foresaw with his last request being for a cigarette.

This is a death that could have been more effective (and one-episode character deaths have been emotionally resonant in the past), but rather than Fad being a character we could actually care about, he was more a narrative aid in helping us know more about Jet, and causing Jet an episode of reflection. The episode overall would have been more effective had we cared about the relationship between Fad and Jet or if we even cared about Jet as much as we did for Faye and Spike, both characters who have an easier time going solo for an episode.

It also seems like the episode was strangely placed in the series lineup, with a storyline better suited for earlier in the show’s run. At session 16, this is information that at this point we could do without, and it’s not like Faye’s revelation of having been in cryogenic sleep for 50 years, which gives the character a sense of tragedy that we didn’t know before.

Also, it looks like I’ll be watching the Cowboy Bebop movie soon, which should be fun.

This can’t have been a fan favorite episode right?