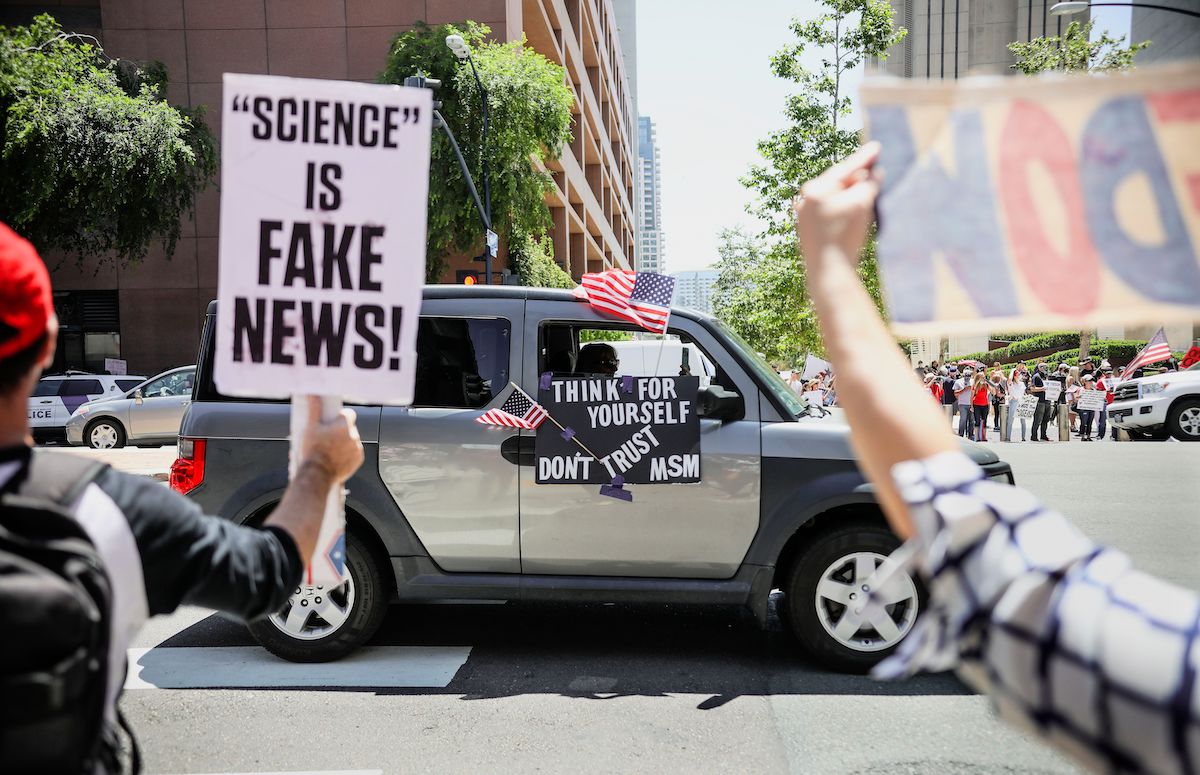 As the United States and other countries around the world have started easing up on their coronavirus-related restrictions, arguments over those restrictions and the virus itself have raged on, both online and in IRL spaces. You’ve probably seen some of the videos (of which there are many) of people irate over being asked to wear a mask in Costco or to respect social distancing seating arrangements in restaurants. Somehow the simple act of wearing a mask in public has become a source of fury for a lot of people, resulting in anger, violence, and even, in a few tragic cases, murder.

How did we get to this place? Well, there’s no question that, in addition to having a president that uses face masks as a weapon in his one-sided ego war on journalists, the constant arguing online is only making people angrier. And according to researchers, close to half of those people arguing aren’t actually people—they’re bots.

We know that bots have a huge impact online. Targeted bot campaigns have been proven to influence everything from elections to pop culture reception. But new research out of Carnegie Mellon University’s Center for Informed Democracy & Social Cybersecurity shows that the presence of bots in online discussions of coronavirus is nearly double that of what would normally be expected around a highly politicized event like this one.

Given how quickly online arguments can turn into real-world cruelty, it’s pretty terrifying to know that half of it is completely manufactured, either by individuals making “do-it-yourself” bots or by larger firms. Even scarier is how effective the bots are in hitting their target and getting attention. “Of the top 50 influential retweeters, 82% are bots,” CMU found. “Of the top 1,000 retweeters, 62% are bots.”

The point of bots is not necessarily to win favor for one side of an argument or the other, but to sow discord and create political or social polarization in general, as well as breaking down our trust in systems and institutions. And to that end, the mask-debating bots are definitely doing their part. And that means that whether an account online is reinforcing your existing beliefs or riling you up with their apparent ignorance, it’s important for all of us to be aware of the extreme prevalence of bots.

Kathleen Carley, who led the research team behind this new data, explains:

“Conspiracy theories increase polarization in groups. It’s what many misinformation campaigns aim to do,” Carley said. “People have real concerns about health and the economy, and people are preying on that to create divides.”

“Increased polarization will have a variety of real-world consequences, and play out in things like voting behavior and hostility towards ethnic groups,” Carley said.

There are a few sites and extensions that can help you detect bots (Bot Sentinel and Botometer are some good ones) but Carley and her team also have some tips for protecting ourselves from being influenced by fake accounts.

There is no guarantee, but closely examining an account can offer indications of a bot, such as sharing links with subtle typos, many tweets coming out very quickly, or a user name and profile image that don’t seem to match up.

“Even if someone appears to be from your community, if you don’t know them personally, take a closer look, and always go to authoritative or trusted sources for information,” Carley said. “Just be very vigilant.”