The Grinch's small heart grew no sizes that day. CBS News tweeted out a video Friday showing police officers “arresting” a person dressed as the Grinch during a tree-lighting celebration in Hewitt, Texas.

“ARRESTING” THE GRINCH: Officers saved Christmas in Hewitt, Texas, on Thursday, as they stopped the Grinch from ruining the city’s tree-lighting. pic.twitter.com/58zpGuYEPy

This sort of ostensibly silly copaganda skit is entirely common. Police departments regularly use these sorts of characters to present a softer image of themselves and their institutions to communities—specifically to children.

Departments across the country have been doing this same “arresting the Grinch” schtick for years and local news outlets—which often act as little more than PR agents for the police—report on it as a fun little bit of theater: 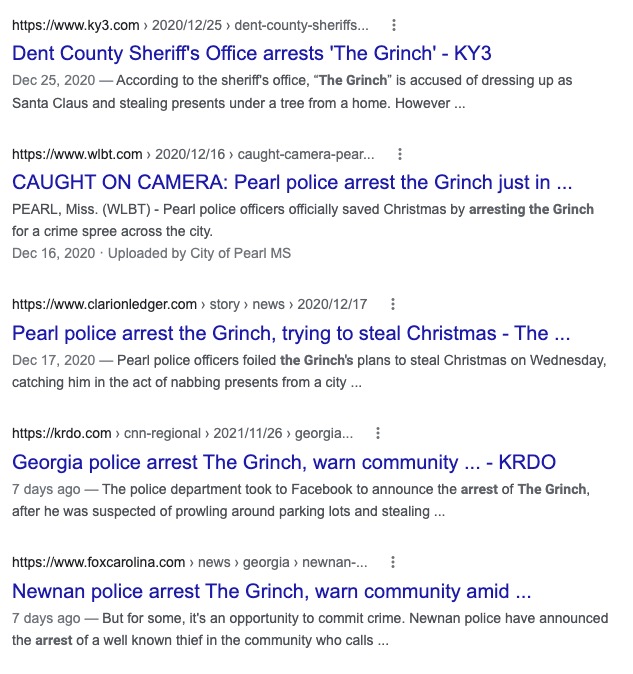 This has always been ridiculous but following a year and a half of increased conversations nationwide about the role of police in communities, people’s tolerance for cutesy copaganda is at an all-time low.

What makes this use of the character of the Grinch so especially outrageous is that it so completely misses the entire point of the story. No one in Whoville ever even considered calling the police about their stolen presents. The Grinch was never incarcerated! Instead, it was the townsfolks’ sense of community that rehabilitated him.

If ever there was an emblem of the incredible potential of redistributing police departments’ massive budgets to fund alternative social support systems (aka “defunding the police”), it’s the Grinch.

arresting the grinch before he has time to redeem himself and save christmas is a truly perfect allegory for how policing makes everything worse lol https://t.co/po0iPwFcZM

IDK if the cops read the whole book, but the Grinch arc is one of redemption, not punishment https://t.co/kWnGOnNq6C

The ENTIRE FUCKING POINT of The Grinch is not that he’s punished, but that he learns the joy of Christmas and his heart grows three sizes. Fuck this copaganda bullshit. #acab https://t.co/vizCcrpkim

At the end of the movie, the Grinch learns to love Christmas.

At the end of real life, the Grinch’s future job prospects are ruined, and he goes in and out of prison, never truly learning what Christmas is all about. https://t.co/nds8VCrlV6

All the cops here did was prevent the Grinch from developing a love of Christmas and community. They tried to be cute and as a result, absolutely no one’s heart is growing three sizes in that video.