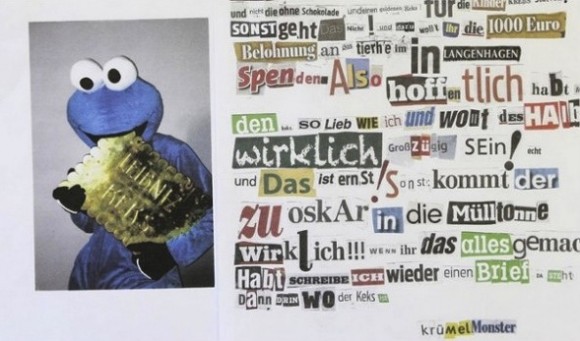 No, not that Cookie Monster. Though if any Sesame Street character were to fall off the rails into a life of crime, a heist to benefit the children of the word is exactly the sort of thing they’d do, no?

The “golden cookie” in question is a gilded bronze sculpture stolen from the top of the headquarters of a German baker earlier this month. Two days ago Hannover, Germany’s local newspaper received a letter—made with letters cut out from magazines, no joke—from someone identifying themselves as “Krümel [Cookie in German] Monster.”

Reads the letter (any friendly German-speaker out there willing to translate the rest of it?):

“I have the biscuit! You want it and therefore you want on one day in February to give biscuits to all the children in Bult hospital. But those with milk chocolate, not those with dark chocolate and not those without chocolate. And a golden biscuit for the child cancer ward.”

Yeah, you hear that?! None of that dark chocolate junk. And if you try and give those poor kids biscuits with no chocolate, so help me…

As you can see, the Krümel Monster included a picture of themselves chowing down on what appears to be the missing cookie. That should be enough to clear the real-life Cookie Monster of any wrongdoing (Muppets and Sesame Street characters are real, OK, and I don’t want to hear otherwise), but CM took to Twitter to clear up matters himself as well, writing: “Me no steal the golden cookie. But me willing to help find real cookie thief!”