Everything About Donald Trump & George Conway’s Twitter Feud Is Gross 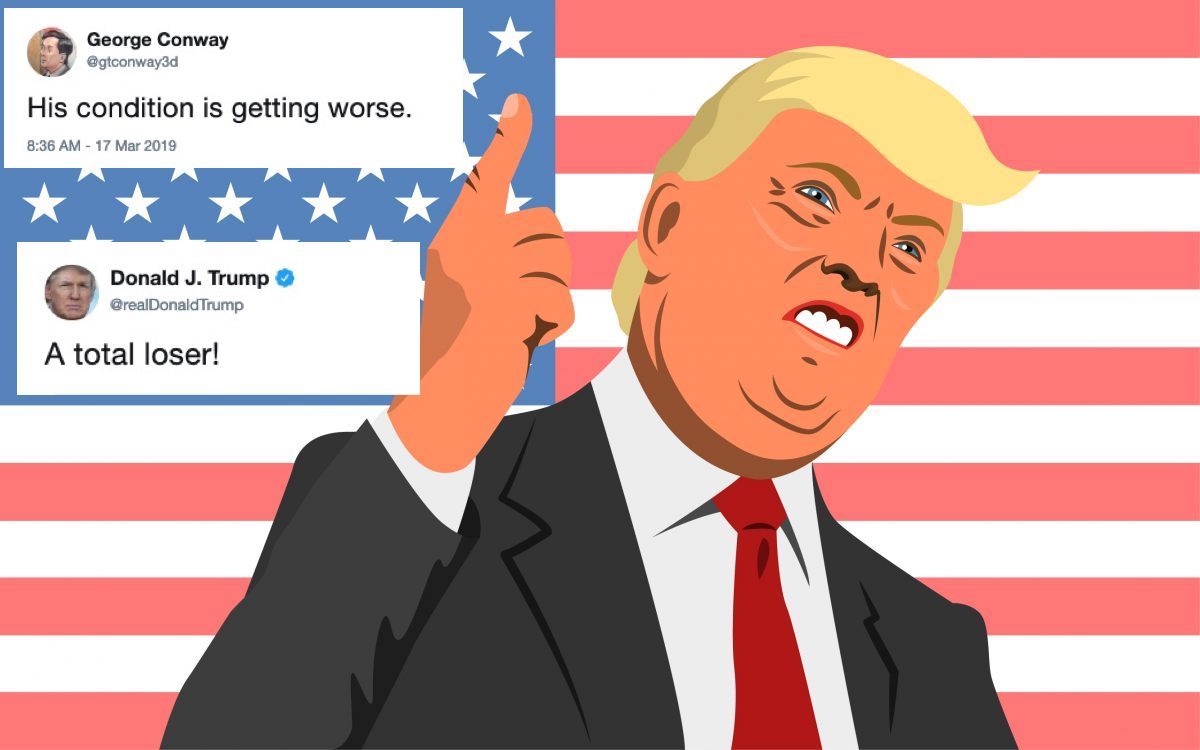 One of the more perplexing relationships in Washington has long been that of Kellyanne Conway and her husband George. She’s Donald Trump’s official defender, always seemingly available to go on various news shows and tell us facts aren’t real or some nonsense. He’s an attorney who loudly broadcasts his hatred of Trump on Twitter. Just this week, Conway–who is not a medical professional–has been suggesting that Trump has at least two diagnosable personality disorders: narcissistic personality disorder and antisocial personality disorder.

His condition is getting worse.

George’s Twitter attacks on Trump are nothing new. Around this time last year, he deleted a series of critical tweets but wouldn’t comment as to why. Whatever reason he had for deleting his criticism is clearly no longer too important. His Twitter account appears to be dedicated nearly entirely to Trump condemnation. I can’t even begin to imagine how someone with such a scathing distaste for Trump can be married to his primary mouthpiece (or vice versa, I suppose), but George suggested in an interview with Washington Post Tuesday that using Twitter so prolifically helps him keep his rage contained.

“It’s so maddening to watch,” he says. “The mendacity, the incompetence, it’s just maddening to watch. The tweeting is just the way to get it out of the way, so I can get it off my chest and move on with my life that day. That’s basically it. Frankly, it’s so I don’t end up screaming at her about it.”

Similarly, he told the New York Times yesterday, “This is just my way of expressing my views about something I find thoroughly maddening, which is the utter incompetence and mendacity of the president and the administration. I don’t end up getting in arguments at home about it.”

On Tuesday, things appear to have become a little less contained, when Trump called George Conway “a total loser,” retweeting a message from his campaign manager claiming Trump had turned down “Mr. Kellyanne Conway” from a job he wanted. (The Washington Post actually has a letter from George Conway to Trump, turning down a job that was offered to him.)

Wednesday morning, he doubled down on that sentiment, tweeting, “George Conway, often referred to as Mr. Kellyanne Conway by those who know him, is VERY jealous of his wife’s success & angry that I, with her help, didn’t give him the job he so desperately wanted. I barely know him but just take a look, a stone cold LOSER & husband from hell!”

George Conway, often referred to as Mr. Kellyanne Conway by those who know him, is VERY jealous of his wife’s success & angry that I, with her help, didn’t give him the job he so desperately wanted. I barely know him but just take a look, a stone cold LOSER & husband from hell!

There’s a lot going on here. For one thing, he’s suggesting that Kellyanne Conway blocked her husband from getting a job–a job he was presumably being considered for, despite Trump claiming he barely knows George.

We all know Trump loves a demeaning nickname, maybe even as much as he loves sexism. So it’s no wonder that he’s glomming on to “Mr. Kellyanne Conway” for George. Because he considers it an insult to suggest his wife might be more powerful, successful, or well-known than he is.

It takes an incredibly insecure man to see the success of a woman he loves as an insult or a threat to himself.

So telling how he sees calling him Mr. Kellyanne Conway as an insult. https://t.co/MU7t4PZn0A

Also, why is it considered the ultimate insult to call a man “Mr. [Insert Wife’s Name Here]”?

This is a stupid thing to say but since Trump thinks it denigrates a man (which it doesn’t) I think I’m going to call him Mr. Melania from now on.#MrMelania https://t.co/8kR7SaME10

So on one side, we have someone with no medical qualifications speculating about someone’s mental health, and on the other side, we have insults rooted in sexism. And Kellyanne is forced to answer for both of them. Great.

Dude, you’re kicking off your morning by screaming at your employee’s spouse. You are the worst boss ever. https://t.co/uvkW90LtMB

Kellyanne did respond to Trump’s recent attacks, telling Politico today, “He left it alone for months out of respect for me. But you think he shouldn’t respond when somebody, a non-medical professional accuses him of having a mental disorder? You think he should just take that sitting down?”

“The president is obviously defending me,” she said. “He could privately say to me, ‘Honey you’re a distraction. We love you. You’ll always be a part of the family but go be with your kids. They need you. Go make a million dollars an hour. Go do that honey.’ It’s the opposite.”

George Conway told the Times that the couple isn’t playing up their seemingly dysfunctional dynamic for any sort of “big payday,” but not everyone believes that’s true.

If you don’t think our future holds an MSNBC or CNN morning show called COFFEE WITH THE CONWAYS where George and Kellyanne have light banter about the news of the day on a fake kitchen set I don’t know what to tell you.

Dreading the day when George and Kellyanne Conway parlay their bizarre War of the Roses shtick into a terrible cable news show.

Ugh, I’m imagining the Fox News version of Morning Joe and the thought of that makes my face hurt from cringing.