Let's shed some light... on your secrets. 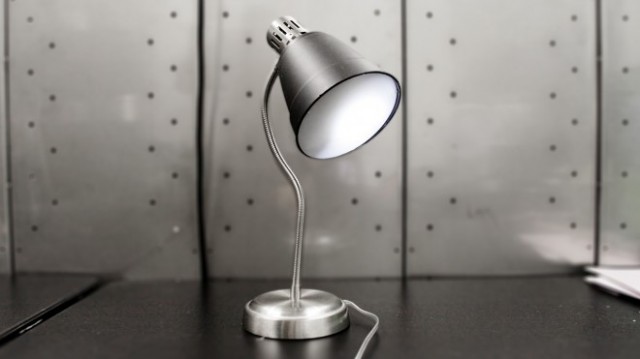 Remember comedian Kyle Ayers eavesdropping on and livetweeting a couple’s breakup? Hilarious, yes, but ethical… hard to say. Well, any residual paranoia New Yorkers had left over from that fiasco is about to increase 1,000 fold: the city now has secret livetweeting lamps. Quick, everyone do a room check!

Conversnitch is an art project revealed today by creators Kyle McDonald and Brian House, who say they constructed a spying lamp to prompt questions about how technology has impacted our perception of public and private spaces. Asks House,

What does it mean to deploy one of these in a library, a public square, someone’s bedroom? What kind of power relationship does it set up? And what does this stream of tweets mean if it’s not set up by an artist but by the U.S. government?

The idea of surveillance furniture might sound far-fetched, but constructing the Coversnitch was so simple that if someone wasn’t already using similar technology, they might be soon.

It cost McDonald and House less than $100 to build their sneaky device using a Raspberry Pi miniature computer, microphone, LED and a plastic flower pot. The Conversnitch screws into a regular bulb and connects to Wi-Fi to upload your secrets to Amazon’s Mechanical Turk, which transcribes fragments of conversations and then posts them to the project’s Twitter account.

So, have House or McDonald tested the undercover lamp on any unknowing participants? Says McDonald,

We recognize that this device can be used in an illegal way, and we will not admit to using it in that way. It has potentially been deployed in various places.

That evasive answer is only complicated by the video the pair released for Conversnitch that shows them apparently hiding the lamps throughout the city.

It’s impossible to say if the lamps were truly installed—it seems to me like the project may be less about actually performing surveillance and more about making people question their privacy in the digital age. But, if all the tweets from Conversnitch’s account (which dates back to September 24th) are actually from real conversations, they’re intimate and varied enough to be from people who didn’t know they were being recorded.

“I’m not pestering you, hun, I’m just asking why you didn’t get the job!”

“How? You think she stalks everyone shoe follows.”

“I can’t help it. I know she’s old and has dementia, but she drives me nuts.”

Just as a precaution, I’m throwing out all my lamps. Candles have never betrayed me.

(via Wired, image via Kyle McDonald)