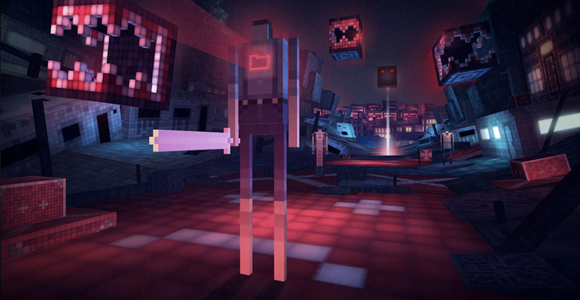 The scene is instantly familiar to anyone who knows games. An adventurer, shedding pink hearts and gold coins, falls onto the bloody floor. “Continue?” the screen asks, a countdown ticking away. There is no way to say yes. The countdown ends, and those final, crushing words appear: “Game Over.” It is then that the game begins.

I thought I knew the question Continue?9876543210 was asking. I have, in the past, considered the final moments of the ubiquitous Dead Adventurer corpses I’ve looted elsewhere. I knew they believed in their quests as strongly as my character did. Mine was just lucky. I thought that Continue? was a play on that, a story about the failed hero who couldn’t let her quest go. And it is. In part. If you only give Continue? one try, that’s all it will be. Keep going. It’s so much more.

The setting is the Random Access Memory, a surreal netherworld of lost souls awaiting deletion. The game randomly chooses one of six protagonists — three male, three female, all rather androgynous — then lines up six levels out of the available eleven. In each level, the player must speak to the people s/he encounters, asking them for help in the form of lightning or prayers. Lightning clears the way to escape. Prayers provide shelter from the frequent sweeps of the garbage collector. Most levels are timed, giving the player a limited opportunity to gain access to helpful NPCs (most can only be reached through riddles or payment).

There is no way to win. I was told this at the beginning, in a pixelated slum strewn with empty bottles and error symbols. “Playersprite,” my fellow dead called me. They told me to let go of my quest, to accept my fate. To sleep. I did not. I ran. The game warned me that I would be confused at first. I was. I wasn’t sure what I was meant to do, or how best to do it. I bungled my way through two levels before the garbage collector caught up with me, tearing me apart as I cowered in my inadequate shelter. My hero died, I was told, with a sense of fear.

I made a mistake. I kept playing. I kept playing because I was pretty sure I had figured out what to do, and I wanted to see if I could beat my previous score. This is a trap, one which may be unavoidable for many players. Continue? is, among other things, a reflection on video games. Unless you have a decent amount of game literacy, Continue? will likely be lost on you. It assumes you know how to clear a dungeon, to kill the adds before the boss, to play Space Invaders. Because I recognized the mechanics, I defaulted to the behavior instilled in me by past games. I cared about my score, my progression, the newly learned strategies still fresh in my head. I found myself getting impatient with the poetry and symbolism. I just wanted to beat the damn thing. But remember—I couldn’t. I was missing the point. It wasn’t about a high score or a cleared map. The point was to die in peace.

My frustration with Continue? turned into genuine enjoyment the moment I did the thing my character was meant to. I let go of the idea of questing for scores and instead quested for contentment. I wanted my hero to face deletion with something other than fear or resignation. I wanted her to realize that living life with gratitude was more important than completing her never-ending to-do list. I wanted her to learn those things, because I want to, too. 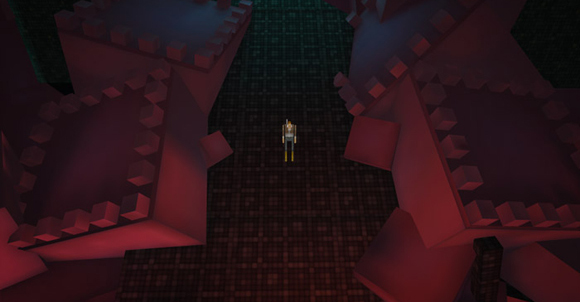 Aesthetically, Continue? feels exactly as the backstage of video games should. The artwork is gorgeous, existing at a dark crossroads between Sword & Sworcery and Fez. I loved the way simple lines and cubes became a warm campfire, a rolling shore, a pillar of smoke. The levels are an interesting hodgepodge of real-world locales—pre-European contact Micronesia, a frozen port in Greenland, a Native American community in a trailer park—and deconstructions of typical game settings. I visited a hard-boiled city, with drugs and crime and a strip club. (The women, angular and lifeless, never left their tables. They turned toward my movement through the room as if I were the most important thing in the world. Most of them could not speak. Though none of the characters in the game emote, the strippers came off as the most object-like. It was a simple, effective, disquieting scene.) I ran through a template warzone, with soldiers forever shooting at nothing (“Millions dead, as Israel dropped an atomic bomb on Morocco because of the Prussian invasion of Mexico,” one told me). I smiled at the kingdom built of torn-down, reclaimed pink castle walls, ruled over by the tough-as-nails princesses who had rebelled against their damselhood. (In case the inspiration for the level is in doubt, the city holds a statue with the inscription “Anita.”) “The hero slain. She freed herself,” one NPC said. “And when she came home, I kissed her forehead and washed the dried blood from her hair.” Said another: “Courage is a muscle. We strengthen it with use.” I want to live in that level.

As I am finding is commonly the case with artsy, thinky games, Continue? is best played in small sessions, one attempt at a time. Even when I had realized my mistakes and was sure I could get further the next time, I put the game away for a few hours, even a full day. This kept me from skipping cutscenes or growing impatient with the dreamlike phrasing. Continue? works best as a sort of guided meditation, rather than a challenge to overcome. Yes, the whole thing is bewildering. Yes, the language is strange and flowery and occasionally over-the-top. I didn’t like this game the first time through, or the second. But the third, the fourth, the fifth…yes. This game made me think about my family, my goals, my favorite stuffed animal, the people I’ve loved, the people I’ve lost, the things I’m allowed to let go of. Not tangentially, either. These paths were deliberate. I’ve never played a game that asked me—me, the player—to sit quietly and think about my dead cat for a few poignant seconds. I’ve never played a game that made me question whether I’d be okay with my own death if it happened today. I don’t know if I would be. But I’m glad I was asked.