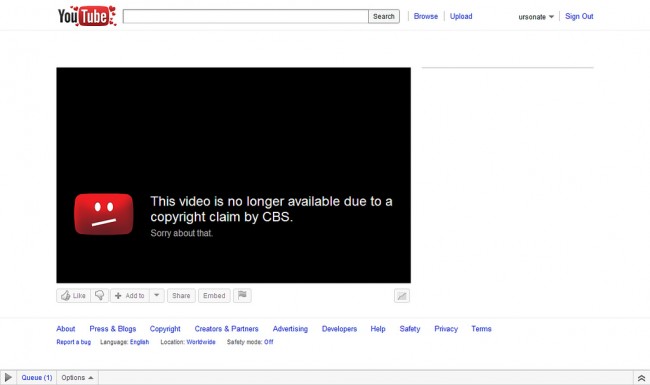 Google has just put out a new report today about their efforts to fight piracy online, including some details about the Content ID system that gets implemented on YouTube. As the report explains, the Content ID system scans YouTube videos to see if they contain copyrighted material, then informs copyright owners when matches have been found. Those owners may end up choosing to monetize the content and receive some money in return for its usage … or they can choose to issue a takedown.

The report paints a lovely picture of how this process works, detailing the importance of fan-made works by emphasizing that “one of the most dynamic parts of our music ecosystem on YouTube are the tributes, backstage footage, remixes, mashups, and concert clips uploaded by fans.” The report also says that “the music industry generates 50% of its revenue on YouTube from monetizing fan uploads.” Wow, 50%? That sounds pretty good. Record execs must be happy about that, right?

Apparently not. You’d think music industry leaders would appreciate that YouTube allows them to monetize content in this fashion, given the struggles of the post-internet age of music merchandising. However, according to Forbes‘ report on a statement from the International Federation of the Phonographic Industry, music industry leaders are less than thrilled. The IFPI put it this way:

Our member record companies’ experience demonstrates that Google’s Content ID tool is ineffective in preventing infringing content appearing on YouTube. Record companies and publishers estimate that Content ID fails to identify 20-40% of their recordings … Well over 300 million de-list notices have been sent to Google by IFPI national groups worldwide.

Despite this, the amount of traffic to infringing sites from typical music search queries sent to Google is now higher than it was before Google changed its search algorithm to supposedly address levels of piracy.

The IFPI’s statement focuses on the idea of “preventing” music from getting uploaded to YouTube, whereas Google’s report about YouTube’s Content ID system focuses more on working with the music industry to provide them ad proceeds from music appearing in fan-uploaded videos.

I can’t believe I’m saying this, but I actually agree with YouTube’s side here, at least in theory. I don’t see how issuing takedowns against fan-uploaded music videos is going to result in higher album sales for musicians. Making music harder to find and harder to listen to is always going to result in fewer fans, not more. The music industry has been focusing on fighting against hypothetical “pirates” for years now, rather than changing their focus to earning more residuals from uploaded videos.

Last April, several prominent musicians came together to ask for stricter DMCA takedowns to be issued on sites like YouTube. In a letter, the artists wrote: “Section 512 of the DMCA has become the all-purpose shield that tech companies hide behind while they threaten the livelihood of music creators. This outdated law forces us to stand by helplessly as billions of dollars in advertising is sold around illegal copies of our work.”

The numbers just don’t seem to add up here, though. When it comes to who is actually making any money on the internet, Google beats out everybody else by a mile. Google uses some unsavory methods for figuring out how to create targeted ads for all of us, and those methods work really well. It makes sense, then, that musicians would be upset about Google raking in money from YouTube streaming. But why wouldn’t musicians focus more on trying to get some of those ad dollars? Why argue so strongly in favor of DMCA takedowns?

The report from Google claims that “the music industry generates 50% of its revenue” from YouTube pay-outs. But they don’t specify how much money they get from all of this. Also, how much of this money is ending up in the hands of musicians, as opposed to copyright holders? Where is the money going, exactly? I have a feeling YouTube, and therefore Google, is getting a whole lot of money from all of this. And I don’t blame musicians for feeling frustrated over that.

It’s just too bad that musicians are diverting attention away from Google by pointing at “pirates” as the supposed problem. Most of those “pirates” are just music fans who want to upload lyric videos or other fan-made content. Music fans are not the enemy; those are the people who want to support their favorite musicians by celebrating and sharing their work. By placing the focus on the prevention of “piracy,” we’re turning a blind eye to the massive amounts of ad dollars that Google has been raking in. Perhaps we could stand to redistribute that money a bit, hm?

(via Forbes, image via Charlene McBride/Flickr)