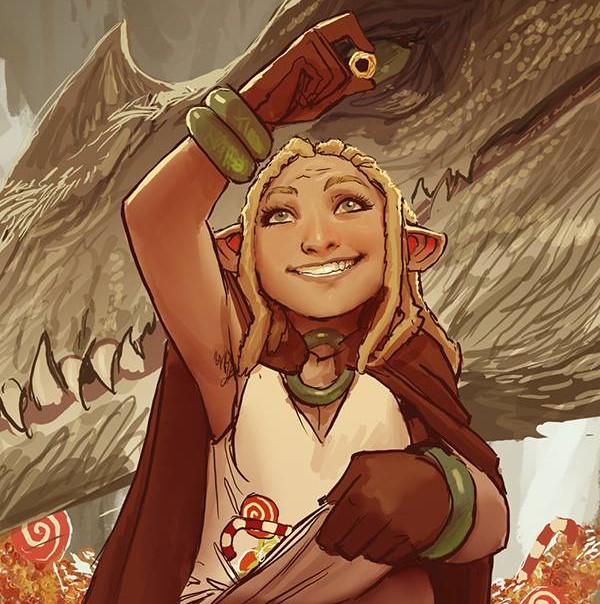 When artist and Rat Queens co-creator Roc Upchurch was arrested for battery against his wife back in 2014, writer and co-creator Kurtis Wiebe pleased many of the book’s fans by taking Upchurch off this book about powerful and nuanced female characters saying first that “I couldn’t have imagined something I love so dearly would become connected to domestic violence,” then “As of today, Roc Upchurch will no longer be illustrating Rat Queens […] I am committed to Rat Queens…and to prove to the fans that they weren’t wrong in loving it.” After this weekend, it seems like that may not have been the final word on the matter.

Once Upchurch was dismissed, he was replaced first with Stjepan Sejic for two issues, then with Tess Fowler who along with Tamra Bonvillain became the book’s new ongoing team. They were drawing the book when Wiebe suddenly put the book on hiatus. In recent months, despite the reasons behind Upchurch’s removal from the title, as well as Wiebe’s seeming commitment to keep Rat Queens unconnected to domestic violence, Upchurch’s art has been posted several times in Wiebe’s Twitter feed, which in turn has been retweeted and pinned by Upchurch:

Meanwhile, on the Rat Queens Facebook page, they’ve been going “Throwback Thursday” on Upchurch’s work at a time when Weibe supposedly wants to separate Upchurch from the title:

Fowler, who’s known for her honesty with fans, began selling her Rat Queens artwork, saying that “she’d really like to not have to live with it anymore.” Fans then began asking her about it, noticing that Wiebe seemed comfortable posting Upchurch’s work, while Fowler and Bonvillain’s work has been conspicuously absent from his social media feeds save for his retweets of reviews and such. Fowler took to Twitter in an attempt to clarify the situation for Rat Queens‘ readers: 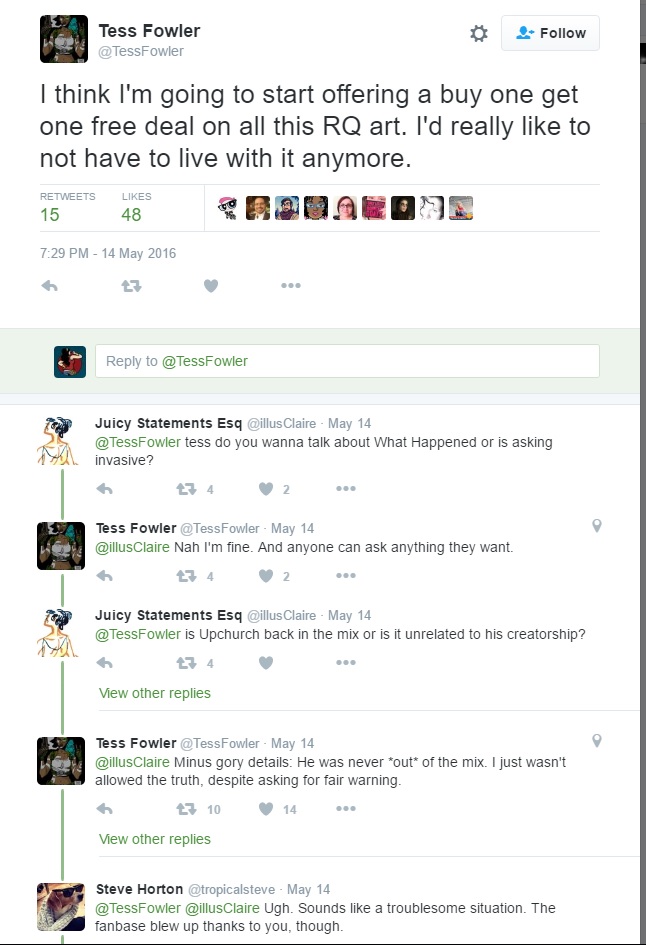 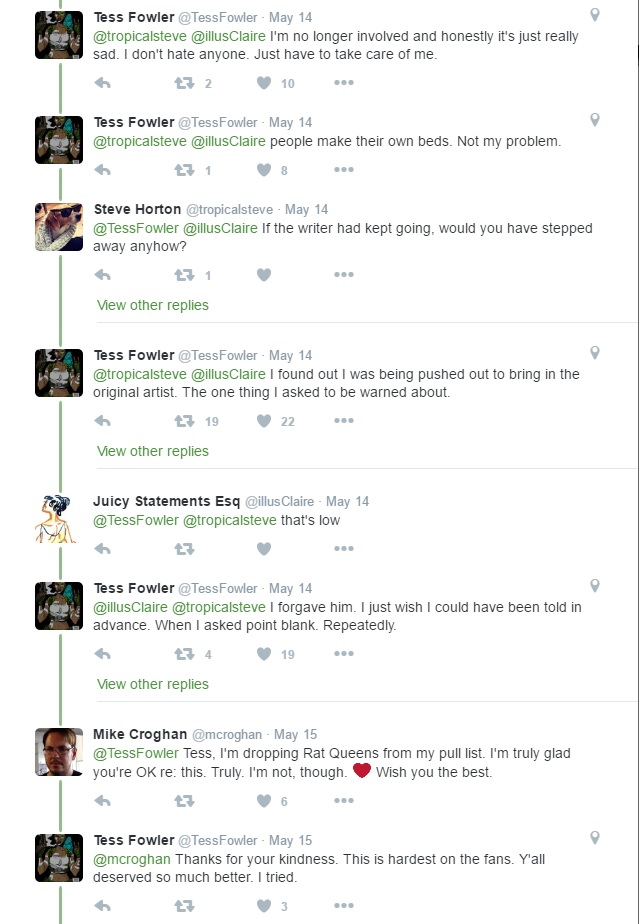 A great round-up of the tweets can also be found over at The Outhousers, where Fowler also offered this statement:

“I was asked via Twitter pointed questions after folks saw Upchurch art being promoted by Kurtis on social media. I answered with what I knew via my experience. I’m fine. This happened weeks ago. It’s a creator owned book and therefore I respect the rights of the creators. It’s not my book. What happens with it is their right and their business. It would have been nice not to be left holding the bag. It would also have been nice not to be lied to. But hey, this is comics kids. You take it on the chin and you move on.”

Meanwhile, Wiebe offered a statement of his own via Twitter:

“Tess Fowler was not removed from Rat Queens to make room for Roc Upchurch. We made our best efforts to find a new voice for Rat Queens together, but I was unable to get to that place despite her talent and enthusiasm. Ultimately, our collaboration was work for hire, and it wasn’t working out creatively.’ do not know what the future holds for Rat Queens. Despite speculation, I have not made any decisions about its future since the announced hiatus other than needing a break to find its voice again. There are no scripts written, and though I’ve been looking for a new team to work with, there is no artist attached.”

Here is what’s clear: Wiebe and Upchurch remain friends despite Upchurch’s wife, Reese, having come forward to talk not only about the alleged violence perpetrated by her husband, but of his subsequent lack of involvement with his children after the fact. This, I can sort of understand. We want the best for our friends, and Wiebe seemed to be hoping that Upchurch would get help and be better. Friends stand by their friends through their mistakes in the hope that they’ll get better. I get that.

What is less clear is why, despite Wiebe not wanting Rat Queens to be connected to domestic violence, he has been hyping Upchurch’s work lately. Also unclear is whether or not Upchurch is in the running if Rat Queens ever returns. Wiebe’s recent statement focuses a lot on Fowler, but says nothing definitive about whether Upchurch will ever come back. Indeed his word choice is interesting. He says “there is no artist attached,” and “Fowler was not removed…to make room for Roc Upchurch,” but he doesn’t ever say that Upchurch isn’t coming back, which one would think would be an assurance he’d hurry to make after having quickly taken him off the title in the first place and seemingly knowing how readers would respond to someone with Upchurch’s history working on a book like Rat Queens.

When TMS reached out* to Fowler after all of this, she said (regarding Wiebe’s statement):

“It wasn’t working out creatively. I love that part of it. I was never told anything but that ‘Rat Queens is yours. Forever.’ And then I find out he’s telling them he’s going to bring Roc back in the next arc. At Wondercon I found out they were on a different project together. I asked again if he was returning to RQ. I was told no of course not. The week before ECCC I found out he was moving to bring him back in.

I for the life of me will never understand why people can’t just cop to things. It is what it is. Own it so we can all move on.”

TMS has also reached out to both Wiebe and Upchurch for statements, and we’ll update this post as needed.

*In the interest of transparency, please note that Fowler is a friendly acquaintance of mine whom I know through mutual friends and through comic conventions.