Even the Descendants of Robert E. Lee and Stonewall Jackson Don’t Want These Racist Monuments 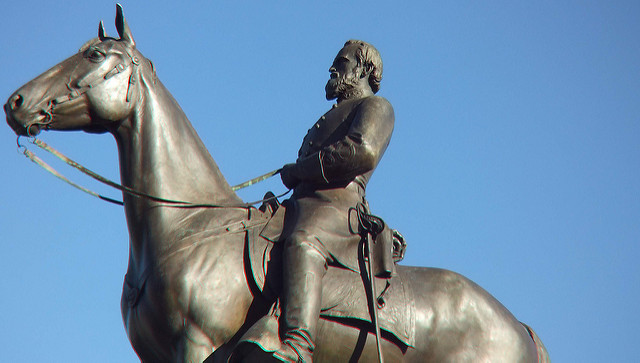 We’ve seen a lot of noteworthy rebukes of the Charlottesville white nationalist rally, but there’s a special kind of power when the people you think are on your side denounce your racism. For instance, one white supremacist Johnny Cash fan who decided to dress for his angry chanting with a shirt bearing the musician’s name was in for a rude awakening when Cash’s children took to social media to call him and the other nationalists “poison in our society, and an insult to every American hero who wore a uniform to fight the Nazis in the second world war.”

It’s a especially powerful thing, then, when the children of the Confederate “heroes” whom the white nationalists idolize and were hell-bent on preserving in statue form go on to publicly criticize their hate speech.

William Jackson Christian and Warren Edmund Christian, great-great-grandsons of Thomas Jonathan “Stonewall” Jackson published an open letter addressed to Richmond Mayer Levar Stoney and members of the Monument Avenue Commission on Slate titled “The Monuments Must Go.” In it, the two native Richmonders write about their disagreement with Stoney’s claim that “removal of symbols does [nothing],” beginning:

“[We] are writing today to ask for the removal of his statue, as well as the removal of all Confederate statues from Monument Avenue. They are overt symbols of racism and white supremacy, and the time is long overdue for them to depart from public display. Overnight, Baltimore has seen fit to take this action. Richmond should, too.”

The two write about the extensive knowledge about their ancestor—his relationship with his family, his teachings, and most striking, “his decision to own slaves, his decision to go to war for the Confederacy, and, ultimately, the fact that he was a white man fighting on the side of white supremacy.” The letter speaks candidly about the violence their great-great-grandfather inflicted, the legacy of that violence, and the ways these statues aim to try and justify that violence. “Jackson, who faces north, supposedly as if to continue the fight,” they state. The entire letter is a great read about two men who’ve decided to confront their racist family history and use that position to try and bring about positive change.

I especially want to highlight this bit of history I was unaware of, and nominate that we replace Jackson’s Richmond monument with something of Laura Jackson Arnold.

In fact, instead of lauding Jackson’s violence, we choose to celebrate Stonewall’s sister—our great-great-grandaunt—Laura Jackson Arnold. As an adult Laura became a staunch Unionist and abolitionist. Though she and Stonewall were incredibly close through childhood, she never spoke to Stonewall after his decision to support the Confederacy. We choose to stand on the right side of history with Laura Jackson Arnold.

Of course, the two point to the ways in which figures like their ancestor and Robert E. Lee have become a “symbol of hate ideology” for white supremacists like the ones the nation saw in Charlottesville. They ask that “other descendants of Confederate generals will stand with us.” It’s significant then, that yesterday, descendants of Lee similarly criticized white nationalism and supported the removal of Confederate statues.

The great-great-grandchildren of the general, Robert E. Lee V and Tracy Lee Crittenberger , said “There’s no place for that hate,” and supported moving these monuments to a museum. While their statement notably doesn’t take the unflinching look at Lee’s own slave ownership and violence that way that the Jackson statement does, it’s still a significant rebuke of the white supremacist movement from those they believed are on their side.

While the debate about how we memorialize figures from our past continues, we the descendants of Robert E. Lee decry in the strongest terms the misuse of his memory by those advancing a message of intolerance and hate. We urge the nation’s leaders as well as local citizens to engage in a civil, respectful and non-hateful conversation.